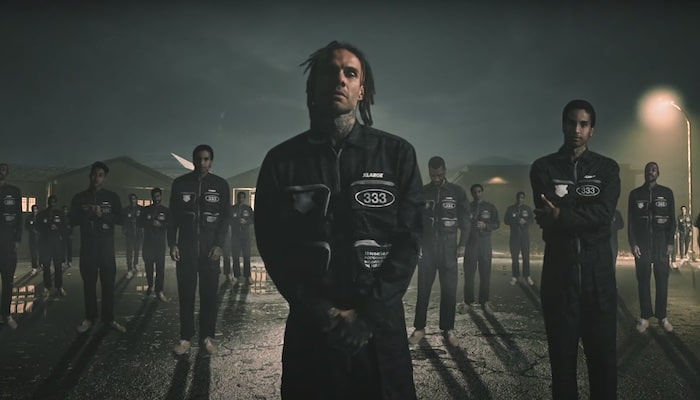 FEVER 333 are back with another powerful visual for their new EP WRONG GENERATION. This time, however, Jason Aalon Butler was joined by Travis Barker for the explosive new video for “WRONG GENERATION.”

Along with Butler and Barker’s intensity radiating throughout the video, FEVER 333 also incorporated a major nod to Blur only true fans will notice.

“This project is art as activism first,” Butler says. “I’m talking about what’s happening and what needs to happen. I hope you understand there’s going to be pain in progress. After dismantling and deconstructing all of these things, we can find a beautiful place to be together.  For me, this whole EP is that 13 days after 34 years. You fucked with the WRONG GENERATION.”

The EP includes direct references to the BLM protests, racial injustice and the political unrest in America. For WRONG GENERATION‘s release in October, FEVER 333 took their demonstration worldwide for a virtual concert series. Since they are unable to tour due to the COVID-19 crisis, FEVER 333 gave numerous special performances to select cities around the world.

Now, FEVER 333 are continuing to spread their activism with their explosive new video for “WRONG GENERATION.” For the visual, Butler teamed up with Travis Barker who helped record the new EP. As it turns out, the stunning visual includes a major nod to Blur.

Butler recently told Revolver that the room he and Barker are trapped in throughout the video is inspired by the room seen in Blur’s “Song 2” video.

“We were hoping to make a video that offered a similar energy and excitement to the live element of this FEVER 333 project,” he says. “I also wanted to give a nod to ‘Song 2’ one of the coolest music videos ever made. Put these vibes together and we ended up with this.”

Read more: Yes, Bernie Sanders has seen that meme, and now he’s using it for charity

To help bring WRONG GENERATION to life, FEVER 333 collaborated in the studio with both Barker and legendary producer John Feldmann. Back in November, Butler exclusively told Alternative Press what that collaborative process was like.

“We only had “SUPREMACY” [at the start],” he said. “And then every day I went to the studio, John was like, ‘You have to finish today. Whatever you’re gonna say needs to be done today.’ That made perfect sense. So every day I just wrote, and I stayed there all day or all night or whatever, and every day was a new song. Every day was a different feeling, a different emotion. Some of the songs are literally about my experience in Leimert Park or my experience on Hollywood and Vine.”

Even though WRONG GENERATION is finally out, FEVER 333 are still finding new ways to create. In celebration of Linkin Park‘s Hybrid Theory anniversary, Butler released a cover of “In The End” exclusively for Spotify. As well, following the U.S. Presidental election, FEVER 333 dropped the new song “Once Again.” More recently, Butler gave an emotional performance of “LAST TIME” in a fiery new music video.

What are your reactions to the “WRONG GENERATION” video? Let us know in the comments below.