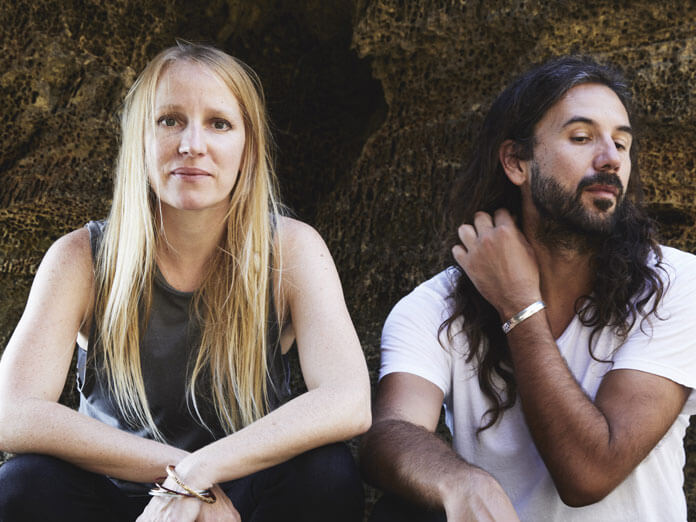 As unexpected as it is to find Luluc closing out 2020 sharing a producer with pop behemoth Taylor Swift, it seems like a fitting end to this liminal, otherworldly year. The kinetic Aaron Dessner beat that opens the Australian duo’s fourth album is as much of a departure from the more muted tones of their previous work as its siblings brought to folklore – and yet, just as those propelled Swift’s heroine east from St Louis, this synthesised pulse also takes the listener on a journey.

The opening “Emerald City” began in a world halfway between the Melbourne of Luluc’s beginnings and the Brooklyn the duo have since come to call home: in Berlin in August 2018, where, on an invitation from Dessner, Zoë Randell and Steve Hassett flew out to perform at the PEOPLE festival. There, in an old East German radio-station-turned-venue-and-studio, the frequent collaborators – together with drummers JT Yates and Jason Treuting, and CJ Camerieri on trumpet – sought to translate the restless energy of the streets of New York into music.

Friends, festivals, transatlantic flights: the “Emerald City” origin story couldn’t be further from the Australian coast where Randell and Hassett finished mixing the album, seeing out the pandemic in isolation. And yet the thread that runs through Dreamboat is primarily an introspective one: of wild horses and weatherbirds, Wizard Of Oz metaphors and waking in the night. Luluc’s dream world, like the real one, is still complicated: at times as idyllic as the vision of “blue water and sunshine” in the Carpenters-esque “Dreaming”; at times a claustrophobic nightmare roping you in against your will.

The frantic buzz of that opening track is straight from the fast-paced, pre-pandemic world in which it was occasionally played live – but the anxieties tied up in its frenetic layers, punctuated by panicked bursts of trumpet, will be familiar to anyone who has lain awake these past few months, “tumbling and twisting” with “too much” in their head. The song is a stream of consciousness set in those anxious moments before sleep; above the noise, Randell’s voice a steady ship, with lines that seem prescient now. “Like Dorothy on the run,” she sings, “breaking my will, I stay in”.

The track is one of two to feature a Dessner co-production credit, Randell and Hassett handling the majority of the album solo. Combined with their decision to release independently rather than through long-time label Sub Pop – an amicable decision, Randell explains, driven by the duo’s desire to release this music into the world at their own pace – the implication is of full creative control. The simplicity at the core of the duo’s songwriting remains intact, but the confidence that comes with experience allows them to lean into different choices as the songs dictate, be it duelling drummers, tenor saxophone or a touch of New York jazz guitar.

Wurlitzer and walking bass lend “Hey Hey” a vintage country feel, jazz drummer Dalton Hart working with Hassett to keep the song at a simmer until a melodic burst of sunshine shoots through the middle. “Weatherbirds” is built around another Dessner beat, but it’s the brightness of Hassett’s guitar and backing vocals that carry the song; and Arcade Fire touring member Stuart Bogie’s saxophone brings the pink flush of sundown to “Out Beyond”, a harmonious Randell-Hassett duet from the edge of the world.

But sometimes, the songs call for nothing at all. “All The Pretty Scenery”, a feather-light beauty in which the narrator’s gaze turns from her own interior world to that of another, features only Randell and Hassett, some vocal doubling the closest thing to trickery. “Gentle Steed”, recorded live in Berlin with Hassett on piano and Caimin Gilmore on double bass, falls somewhere between old folk song and mythology, Randell’s vocals timeless and pure. Her voice carries something of a myth-making quality in its timbre, making the everyday details that creep into her lyrics – a reference to “booze”, an affectionate “my man” designation for a partner – twice as charming.

The real world creeps in as it must: as the sound of cars “rolling their way into my notebook” among the diary-esque lyrics of “Hey Hey”; in the shape of an arachnid in “Spider”. But behind it all, a self-possessed Luluc in isolation, daydreaming of friends apart until they can once again cross the sea.