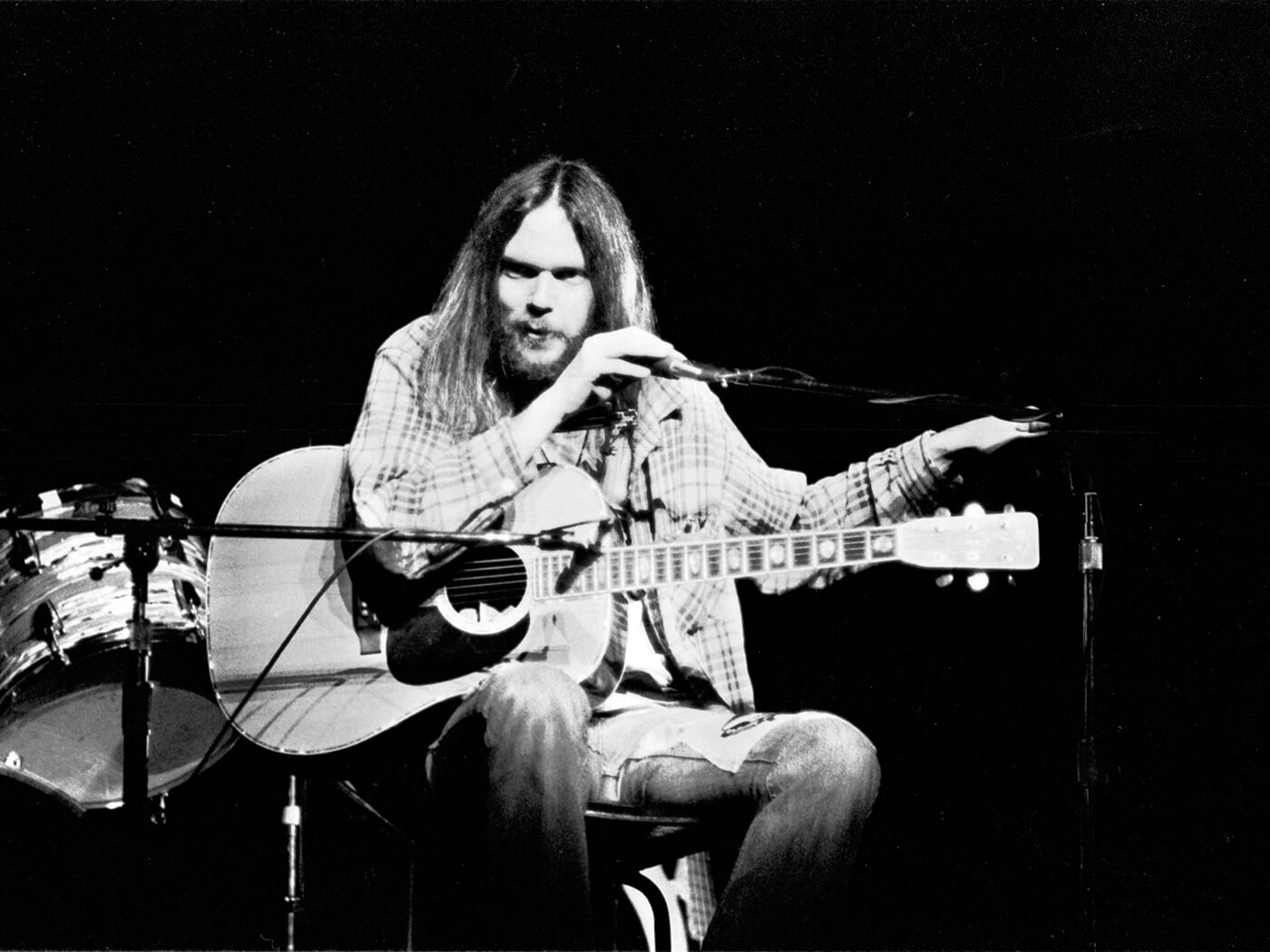 It begins quietly in A&M Studios, Los Angeles, on November 15, 1972, and ends several thousand miles away on March 10, 1976 in a blaze of feedback at Tokyo’s Budokan Hall. The intervening years – those covered, no less, by this ambitious second instalment of the expansive Archives project – remains a critical period for Neil Young, not just for the stellar run of albums he made during this time, but for the way it continues to dominate our thinking about his long, capricious career.

After The Gold Rush and Harvest made Young a solo star at the start of the ’70s, but his legend took shape during the turbulent, hugely productive phase that followed. It is a transportive and gripping narrative – the “Ditch” trilogy, the “lost” albums, the death of Crazy Horse guitarist Danny Whitten and the arrival of his replacement Frank “Poncho” Sampedro, his break-up with Carrie Snodgress – and one which still exerts a gravitational pull from which it is difficult to escape.

So what does the arrival – at long last – of Archives Volume II tell us about 1972 to 1976? Does this new boxset – 10 discs, a handsome trove of music, all for a correspondingly handsome sum of £210 – deepen our knowledge of Young’s fertile mid-’70s period? Or instead do these 131 tracks take us so far behind the curtain that the power of the original music gets lost along the way?

Archives II begins with the artist pared back to his essential elements: voice and guitar. Here he is in A&M Studios in 1972, with producer Henry Lewy on the other side of the glass. There are three songs from their session here. The unreleased “Letter From ’Nam” is a bitter beauty, which Young later reworked as “Long Walk Home” in the ’80s. “Monday Morning” appeared as “Last Dance” on Time Fades Away – in this early acoustic iteration, it’s much less manic and ironic, landing on a genuinely anthemic vibe. “The Bridge”, one of Young’s most affecting piano ballads, is exquisitely rendered. In between takes, he banters with Lewy.

“I can hear those people so loud that it’s weird,” says Young before “Monday Morning”, presumably referring to noise from a neighbouring studio.

“Yeah, he’s a rock’n’roll producer and he listens full volume,” agrees Lewy. “I went and asked him [to turn it down], he gave me a dirty look.”

“Well, fuck him,” says Young before diving into this warm, wide-eyed take.

The rest of Disc 1, entitled Everybody’s Alone, homes in on the Stray Gators, the band of session players Neil recruited for Harvest and who subsequently cycle through Archives II. The previously unheard rehearsal tapes recorded in late ’72 at Young’s Broken Arrow ranch offers plenty of delights, if not revelations. There are rollicking takes on “Time Fades Away” and “Come Along And Say You Will” alongside a never-before-heard song, “Goodbye Christians On The Shore”, highlighted by Ben Keith’s droning dobro and a 7/8 time signature that makes it sound, curiously, like a country rock cousin to Pink Floyd’s “Money”.

Young takes an abrupt left turn when Disc 1 picks up unreleased live recordings from the beleaguered Time Fades Away tour – which saw him battling with his band, his audiences and his demons in the aftermath of Whitten’s death. As demonstrated here – and on Disc 2, Tuscaloosa, recorded during that tour – Young could shape great art out of chaos, almost by sheer strength of will. The Stray Gators sound fierce, whether they’re taking a wrecking ball to “Last Trip To Tulsa” or blasting through “The Loner”. There are quieter moments, too. “Sweet Joni” is an affectionate piano ballad – “My closest friends have never heard this song,” he says at the start. “I may screw it up, I’ve never done it before.” Elsewhere, Young prefaces an acoustic take on “LA” with a stoned monologue that begins with a pass at “I Got You Babe” and ends with a shaggy dog yarn in which Young and Gators’ drummer Johnny Barbata head off down Venture Highway, while fires rage behind them. “I’m heading to the hills with my gold records!” he goofs. Disc 1 ends where it began: Young and his acoustic guitar in a studio. It is now June 1973 and he is working through his original version of “Human Highway” – a song he struggled to capture satisfactorily over several years. It sounds beautiful here, with his weary delivery elegantly cushioned by autumnal harmonies from Crosby, Stills & Nash.

While Everybody’s Alone acts as a widescreen take on where Young is coming from in 1972 – the old folky ways gradually giving way to the tumult of the Ditch trilogy – Tuscaloosa zooms in for a close-up. Recorded a third of the way though the Time Fades Away tour, it gives us a fuller picture of what Young was up to onstage at this crucial point. Though audience tapes from the tour sometimes show Young in a confrontational mood, he’s easy-going here, cracking jokes and making light of his newfound success (he introduces “Heart Of Gold” as “Burger Of Gold”). Think of Tuscaloosa as Time Fades Away’s kinder, gentler cousin. It is one of three previously released albums that appear in Archives II – along with Roxy: Tonight’s The Night Live and Homegrown. Young has form here, of course – he released Live At The Riverboat 1969 and Live At The Fillmore East 1970 ahead of their inclusion on Archives I. But while they might feel extraneous, if you purchased them earlier as standalone releases, they nevertheless feel like a necessary part of the Archives II story.

Young devotes Discs 3 and 4 to Tonight’s The Night and accompanying live album Roxy…. Disc 3 opens with a wobbly and woozy “Speakin’ Out Jam”, with Neil slithering into his lounge lizard alter ego. “I’m feeling pretty laidback,” he slurs while cranking out a sloppy piano riff. The rest of the Santa Monica Flyers – a reconstituted Crazy Horse with Nils Lofgren and Ben Keith – sound suitably refreshed. It’s followed by “Everybody’s Alone”, with Young’s voice stretching against some invisible shackles. The song starts with Young resting “in the shade of the mountains and trees beneath the cool summer breeze” before paranoia sets in: “Someone saying that I’m not the same, that’s not easy to be.” He concludes, “All I want you to know is that I love you so much I can hardly stand it/But everybody is alone.” You can find an earlier version on Archives I, recorded with the Whitten line-up of Crazy Horse during the After The Gold Rush sessions. Young perhaps chose to have another pass at it during the Tonight’s The Night recordings as tribute to Whitten; but it finds Young vulnerable at a time when his prevailing mood was of defiance.

Best of the unreleased material on Disc 3 is an appearance from Joni Mitchell, who leads Young and the Santa Monica Flyers through a wild rendition of Court And Spark’s “Raised On Robbery”. On paper, Mitchell and Young’s band – who, for the most part, sound like they’re being held together by gaffer tape – seem like a mismatch, but the results are brilliant. There’s some terrific interplay, with Lofgren laying down a bed of barroom piano chords over which Young’s solos scythe and wail while Mitchell throws herself gamely into the shenanigans. Barrelling along at a fair clip, it’s a chink of light amid a collection of otherwise desolate songs.

Filling out the Tonight’s The Night picture is Roxy…, recorded with the Flyers on the Sunset Strip a week after the album was completed. It’s the same as the standalone album from 2018, with the addition of Crazy Horse’s country-flavoured “The Losing End” as an encore. Chief among the Flyers’ players for his distinctive yet mellow pedal steel playing is Ben Keith, a sympathetic presence across much of Archives II. After first hooking up with Young on Harvest, he provided musical stability in the years immediately after Whitten’s death. He’s not quite a sparring partner in the way of Whitten, David Briggs or even Elliot Roberts, but as an accomplished sideman Keith is on hand during the Time Fades Away tour and as Young hurls himself further into the ditch with Tonight’s The Night, On The Beach and Homegrown.

Disc 5 – Walk On – finds Keith operating in a kind of interim version of Crazy Horse, alongside Billy Talbot and Ralph Molina, on “Winterlong”, “Walk On” and an unreleased version of “Bad Fog Of Loneliness” in November/December 1973 sessions. Held at Broken Arrow a few months after tracking Tonight’s The Night, they feel like a glimpse into a Crazy Horse that never quite made it out of the barn. Keith’s pedal steel adds a genuine wistfulness – a quality you may not associate with Crazy Horse over distance, but one that feels entirely appropriate in this moment. What a punishing couple of years. By the time Disc 5 ends with an unreleased solo version of “Greensleeves”, Young sounds like the loneliest man in the world…

You can read the full six-page review of Archives Volume II: 1972-1976 in the January 2021 issue of Uncut which is still available here, alongside the February 2021 issue – which features a whole heap more Neil Young goodness.

Eminem and Snoop Dogg Share Video for New Song “From the D 2 the LBC”
AHVE is back with fire new single “Selfish”
R. Kelly Sentenced To 30 Years In Prison
Municipal Waste’s Tony Foresta on The MetalSucks Podcast #444
Top 10 Songs Motley Crue Has Not Played on the 2022 Stadium Tour