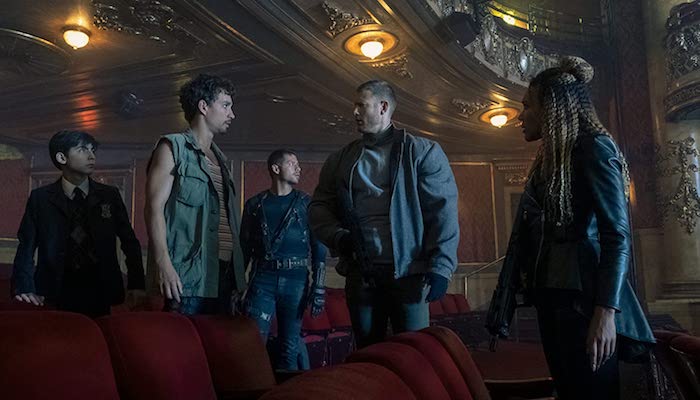 Pre-production for season 3 of the Umbrella Academy is officially underway. Now, fans are getting even more new looks at the upcoming season’s cast and Sparrow Academy newcomers.

This week, showrunner Steve Blackman and Justin H. Min, who plays Ben, shared some exclusive behind-the-scenes looks at the cast getting ready to return for the Netflix show.

Read more: We finally know when the 2021 Billboard Music Awards are happening

Production and filming for the Umbrella Academy season 3 is set to start sometime next month. However, last week, we learned that the cast is already preparing for their return to set. David Castaneda posted a photo from the first table read-through of the new season.

As well, Justin H. Min also confirmed that the cast and crew have completed the first official read-through of season 3. It turns out, Min has quite a few things to say about the new season’s script including the arrival of the Sparrow Academy. In a tweet, Min seemingly teases the new Ben fans can expect to see in the upcoming season.

“Just had our first semi-readthrough, and everyone is perfect. absolutely perfect. and by everyone, I mean the sparrows. I don’t care about the others.”

just had our first semi-readthrough, and everyone is perfect. absolutely perfect. and by everyone, i mean the sparrows.

i don’t care about the others.

Read more: Everyone was more worried about that tank photo than Billie Eilish

Now, the cast and crew are revealing even more behind-the-scenes looks at season 3. On Monday, Min shared a video of his Instagram Story with his new-found Sparrow Academy family.

Earlier this month, Netflix officially introduced the new actors joining season 3 as members of the Sparrow Academy. To start, “honest, virtuous and demanding” No. 1 or Marcus is being portrayed by Justin Cornell. Britne Oldford is portraying Fei, No. 3, while Jake Epstein is taking on the role of Alphonso, No. 4, who has “a caustic and biting sense of humor.” Some fans many recognize Epstein for his on-screen portrayal as Craig Manning on Degrassi: The Next Generation.

The Sparrow Academy’s “romantic dreamer” No. 5, Sloane, is being played by Genesis Rodriguez and Cazzie David is “loner” Jayme, No. 6. However, the Sparrow Academy’s No. 7 is catching a lot of people’s attention. The final member of the academy is Christopher, an “existential dread-inducing psykronium cube.”

Along with Min, showrunner Steve Blackman also revealed how the cast have bonded while in quarantine. Over the weekend, he shared a photo of a Zoom call with most of the main actors we will see in season 3. According to the caption, a lot of Bingo and drinks were involved in getting the cast acquainted with each other.

“Quarantine nights. Drinks and bingo with this motley crew!”

As well, executive producer Jeff King is helping fans get ready for season 3 with the ultimate the Umbrella Academy word search. Don’t worry, this search is significantly easier than that season 2 Easter egg scavenger hunt that sent most viewers into a frenzy.

More on the Umbrella Academy season 3:

In late November, Blackman shared an exclusive look at a new TUA script and the first episode’s title alludes to that season 2 cliffhanger.

As we all remember, the end of season 2 left most viewers on edge. The Hargreeves siblings returned to the “present time” only to learn that Sir Reginald Hargreeves created the Sparrow Academy instead of the Umbrella Academy. Among the members of the Sparrow Academy is Ben. As a result, TUA fans can expect a completely different Ben than they’ve seen in past episodes. In fact, it seems as though sweet old Ben may be gone for good.

“This is not the sweet Ben we know and love,” Deadline reports. “This Ben is a Machiavellian tactician. [He is] wrapped up in a pretty boy body with a rumbling inner-squid [and] determined to gain his status as the leader at all costs.”

Read more: MGK and YUNGBLUD’s new collab is being compared to Metro Station

Earlier this month, fan theories emerged that Gerard Way could finally make his highly-requested Umbrella Academy cameo as Christopher, one of the Sparrow Academy members. Currently, the actor behind this mysterious cube is unknown. However, Deadline‘s description of No. 7 is raising some eyebrows.

“Christopher is a telekinetic cube of unknown origin,” Deadline says. “He can turn the room freezing cold and induce paralyzing fear. He acts as the Sparrows’ consulted oracle who hands out incredible advice and serves as the family mediator.”

According to Deadline, the character will have a voice. This has caused fans to theorize that Christopher may be voiced by Gerard Way. Although nothing has been confirmed, this role would the perfect opportunity for Way to make his highly-requested cameo.

Last year, Alternative Press interviewed Justin H. Min who revealed some secrets about the Sparrow Academy and what’s in store for season 3.

Are you ready to see the Umbrella Academy season 3? Do you want the cast members to continue sharing behind-the-scenes content? Let us know in the comments below.

Who Was Spotify’s Most-Streamed Artist of 2022?
Fall Out Boy take out newspaper ads to tease new album
How to Create Your Own Festival Lineup From Your Spotify Stats
Jay-Z Put Up $1.5 Billion to Buy Bacardi’s Share of D’USSE Cognac
Rap Radar Podcast: Berner