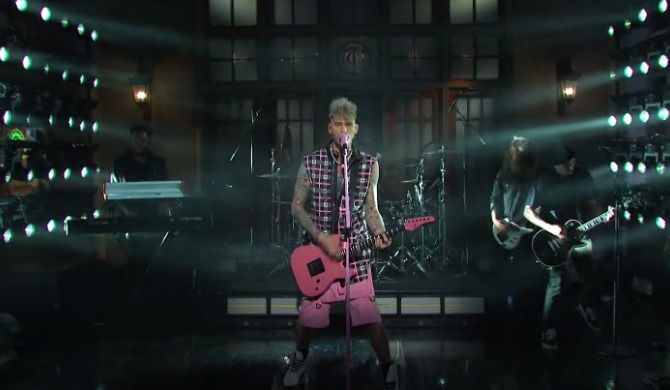 Machine Gun Kelly made his debut on Saturday Night Live this weekend, jamming on guitar while two songs from Tickets To My Downfall.

MGK was the musical guest for the first SNL show of 2021, featuring host John Krasinski from The Office and A Quiet Place who also made his hosting debut.

Before the show even started, MGK was posting about how much it meant for him to be on the show. He reminisced about hanging out with Pete Davidson on set before he was ever invited to perform.

i used to chill on Pete’s couch in his office while they’d be recording SNL when i’d come to new york and be like
“fuck, i can’t wait till they book us to perform”

throwback to @nbcsnl christmas party that i wasn’t invited to but showed up anyway pic.twitter.com/CsXhLxX3FO

they put the name in pink 😳💘🤘🏼@nbcsnl pic.twitter.com/4bXfSpqRFR

Also, he shared his text exchange with blackbear, who features on “my ex’s best friend,” wishing him good luck before the show.

ima kill it tonight my bro
ur a real one 🖤@iamblackbear pic.twitter.com/At3b5lqvj9

And in true rockstar style, the day of the show he made a grand entrance by carrying girlfriend Megan Fox into the studio like a princess. Before the show, rumors began swirling that the two got engaged, but that has yet to be confirmed.

Read more: Metro Station know about that comparison to MGK and YUNGBLUD’s song

MGK first performed “my ex’s best friend,” donning a pink microphone, guitar and grunge-looking ensemble. The performance was the epitome of pop punk perfection, and you can watch that below.

Then later in the show, he performed “Lonely,” an emotional song he wrote as a tribute to his late father. The whole performance was emotional, marked with a dark set and MGK belting out the track on guitar. You can see the emotion behind his face while performing, which gave us goosebumps.

And that wasn’t all. Of course, fans couldn’t get enough of whenever BFFS MGK and Pete Davidson interacted, whether it was behind the scenes or while filming.

Arguably the best moment was at the end, when Davidson and MGK hugged each other so hard that they literally fell off the stage. You can catch the hilarious moment below.

Thank you, @johnkrasinski and @machinegunkelly!

And after the show, MGK declared it was the “best night ever” on Twitter to celebrate the accomplishment.

What did you think of MGK’s debut on SNL? Sound off in the comments below.