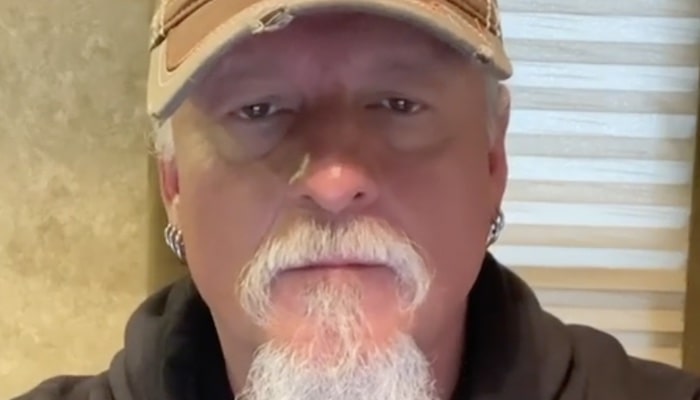 It looks like Iced Earth guitarist Jon Schaffer hasn’t been extradited to Washington, D.C. just yet.

According to a new report, Schaffer is still being held in Indiana’s Marion County Jail three weeks after he was arrested for his involvement in the U.S. Capitol insurrection on Jan. 6.

Iced Earth and Demons & Wizards musician Jon Schaffer is currently facing six federal charges for his actions during the insurrection at the U.S. Capitol last month. After being placed on the FBI wanted list, Schaffer was arrested by Indiana police on Jan. 17.

Jon Schaffer, Columbus, IN, has been arrested in connection to Jan 6 incident at the U.S. Capitol. Schaffer faces 6 charges including engaging in an act of physical violence in a Capitol building. Schaffer was allegedly among rioters who sprayed Capitol police with “bear spray.”

According to WishTV, some of the charges Schaffer is facing include “disrupting the orderly conduct of government business” and “knowingly entering or remaining in any restricted building or grounds without lawful authority.”

Over the past few weeks, a lot of details about Jon Schaffer’s arrest and court hearings have been reported. So far, Schaffer has been in front of a federal magistrate twice, but has chosen to stay in federal custody. Then, at the end of January, we learned that Schaffer was being extradited to Washington, D.C. after his legal team agreed to handle all further court proceedings there.

Soon after, on Jan. 26, the jailed guitarist was reportedly in the custody of the U.S. Marshals. Now, it looks like Schaffer is actually still being held in Indiana’s Marion County Jail. According to Republic News reporter Jordan Morey, Schaffer is still in Indiana three weeks after his initial arrest.

“I’m told that Jon Schaffer is still being held at Marion County Jail. He has been there since Jan. 17.”

I’m told that Jon Schaffer is still being held at Marion County Jail. He has been there since Jan. 17. https://t.co/fIGbsjxVfl

At this time, it’s unknown when Schaffer may actually be extradited to Washington, D.C. Until then, let’s get you up to speed on the other developments in Schaffer’s life since his arrest.

Read more: MGK is checking back into ‘Hotel Diablo’ for his new graphic novel

Earlier this week, we learned that Schaffer is the only Indiana resident arrested for the U.S. Capitol riots that actually voted in the 2020 election. According to WishTV, Schaffer voted in 2020, but it was his first time to do so in 12 years. As well, his voting record shows he did not vote in the 2016 general election where Donald Trump was elected.

Additionally, Schaffer’s longtime friend and Demons & Wizards collaborator Hansi Kürsch recently confirmed he is no longer involved in the musical project. On Monday, Feb. 1, he shared a statement with Rock Hard which has been translated from German.

In mid-January, it was brought to light that Century Media may be taking action following Schaffer’s arrest. Both of Schaffer’s projects – Iced Earth and Demons & Wizards – have disappeared from the label’s online roster. Although the bands no longer appear on the label’s current roster, they are also missing from the roster of former artists. As well, both of the band’s merch is no longer available on Century Media’s webstore.

Schaffer’s Iced Earth bandmates have also released a statement denouncing the events that transpired last month. However, they failed to address Schaffer’s involvement in the insurrection. Additionally, singer Stu Block attempted to clarify his stance on the riots after a now-deleted post seemingly showed he was in support of the U.S. Capitol breach.

Along with all of this, fans recently took to Schaffer’s Kickstarter campaign to share their thoughts on his arrest. Many are now requesting that their donations to his Kickstarter for Wicked Words & Epic Tales, “a collection of Jon Schaffer’s lyrics, interviews and a chronicle of the artwork that they inspired,” be refunded. However, some are praising the guitarist’s actions at the Capitol. So far, the campaign has earned 666 backers and raised over $100,000.

What are your reactions to Jon Schaffer still being held in Marion County Jail? Let us know in the comments below.