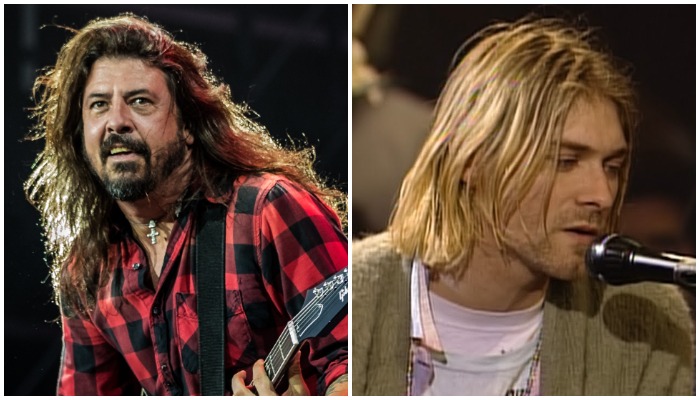 There’s a whole lot going on in Foo Fighters‘ world this week. After months of waiting, the band finally debuted their 10th studio album Medicine At Midnight on Friday, Feb. 5.

Now, Dave Grohl is reflecting back on his career and has revealed why he’s not concerned about what Kurt Cobain would’ve thought of Foo Fighters. As well, Grohl has also opened up about musical prodigy Nandi Bushell and their recent drum battle. To top it all off, Foo Fighters have even debuted a new cover of a Tom Petty classic.

Following the death of his Nirvana bandmate Kurt Cobain in 1994, Dave Grohl went on to create Foo Fighters. During the early stages of Foo Fighters, Grohl and his new bandmates were often compared to Nirvana, something that always bothered Grohl. Now, 25 years after Foo Fighters’ start, Grohl is opening up more about Kurt Cobain.

During a recent tell-all interview with NME, Grohl shares that he’s not concerned about what Kurt Cobain would’ve thought of his career in the Foo Fighters. Why? Well, Grohl has already spent over two decades having his work critiqued by onlookers.

“No, I don’t – and I’ll tell you why,” he says. “For 25 fucking years, that’s been something I’ve been judged by and from the get-go, you have to realize that it’s a dangerous place to be. You can’t create or judge anything by someone else’s standards.”

Read more: MGK is checking back into ‘Hotel Diablo’ for his new graphic novel

Elsewhere in the interview, Grohl also recalls the fear he felt when he began working on Foo Fighters’ first album just 6 months after Cobain died.

“It’s funny because I kept this little project a secret for so long before it became a band,” he says. “And one of the reasons was for fear that people would judge it. That’s all of the weird little demo tapes I’d done, I just didn’t feel comfortable sharing because they were mine. There was some safety and security in just keeping them to myself, so one of the reasons I started this band was to move on from the past. The band truly represents this continuation of life because I didn’t want to remain in that place forever and I just couldn’t. I would have suffocated.”

Now, 25 years later, Foo Fighters have dropped their 10th studio album Medicine At Midnight. As it turns out, Grohl’s recent drum battle with musical prodigy Nandi Bushell inspired him to put out this new album.

“The thing that inspired me the most to release this album was that drum battle I had with Nandi,” Grohl tells Kerrang!. “More than just some back and forth between two musicians, this battle of technical proficiency, it was spreading joy and happiness. People would turn on their computer or phone and for three and a half minutes they would smile because a 10-year-old girl was kicking my fucking ass in a drum battle. To me, that’s what the world needed.”

To help celebrate the release of Medicine At Midnight, Foo Fighters recently performed a few songs for SiriusXM. Along with their new track “Cloudspotter” and classic “Best Of You,” Foo Fighters also took on Tom Petty’s “Honey Bee.”

Medicine At Midnight is available to stream below.

What are your reactions to Dave Grohl’s comments about Kurt Cobain? What is your favorite song off of Medicine At Midnight? Let us know in the comments below.