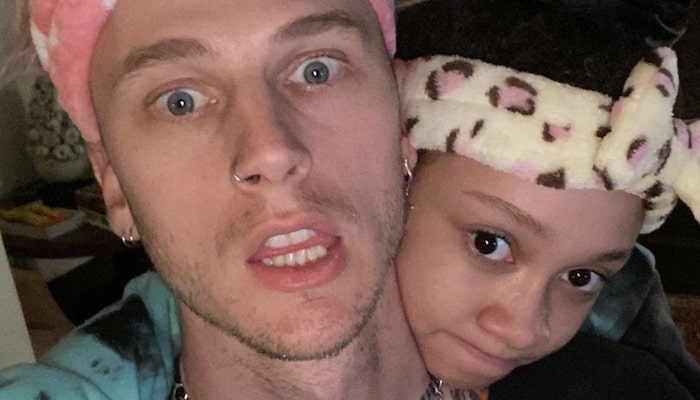 It looks like Machine Gun Kelly isn’t the only actor in his family.

This week, Machine Gun Kelly revealed that he is officially acting alongside his daughter Casie Baker in an upcoming star-studded thriller.

As we all know, Machine Gun Kelly is no stranger to acting behind the camera. Over the years, he’s forged an acting career in films such as Netflix‘s Bird Box, Project Power, Nerve with AHS star Emma Roberts and King Of Staten Island with his off-screen BFF Pete Davidson. Back in 2019, he even portrayed Motley Crue drummer Tommy Lee in Netflix’s The Dirt.

Earlier this year, we saw Machine Gun Kelly trade-in rehearsing lines for the director’s chair. Alongside MOD SUN, he co-directed Downfalls High, the musical film based on his latest album Tickets To My Downfall. As well, last year, Machine Gun Kelly gave us a glimpse of his upcoming Western film The Last Son.

Amidst making his debut on Saturday Night Live and announcing his new Hotel Diablo graphic novel, Machine Gun Kelly is working on his next film One Way. This time around, however, he is joined by a very familiar face. Earlier this week, Deadline confirmed that Machine Gun Kelly’s daughter Casie Baker is starring alongside the Tickets To My Downfall performer in the upcoming thriller.

Read more: New York is planning to resume live events at stadiums and arenas–here’s how

Alongside Casie and MGK, One Way stars Euphoria‘s Storm Reid, Kevin Bacon and Travis Fimmel. Machine Gun Kelly plays Freddy, a man who is on the run with a bag of cash after a robbery of his former crime boss goes wrong.

“With a potentially fatal wound, he slips onto a bus headed into the unrelenting California desert,” Deadline reports. “After a call for help, Freddy’s estranged father (Bacon) betrays him, notifying the crime boss where he is. With his life slipping through his fingers, Freddy is left with very few choices to survive.”

and Storm is so talented
dope cast >> 🎬🍿🖤 pic.twitter.com/fy7lUT9INk

Earlier this week, MGK also posted a few glimpses of him on set with Casie as filming for the movie continues. According to the post, fans can expect to see Machine Gun Kelly likely rocking some pink hair in the upcoming thriller.

What are your reactions to Machine Gun Kelly acting alongside his daughter in a new movie? Let us know in the comments below.