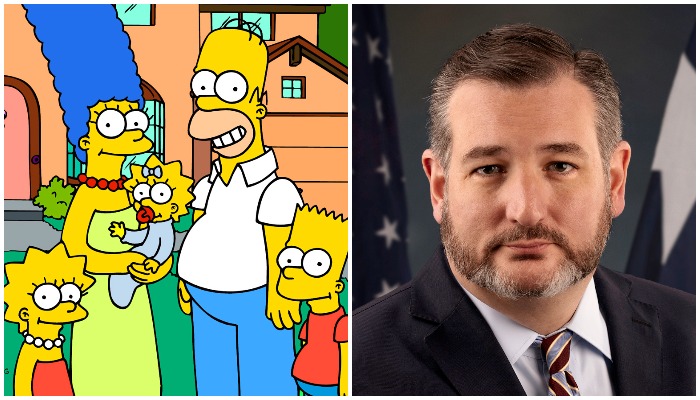 It looks like The Simpsons may have predicted another 2021 event years ago.

This week, an old episode of the animated show has resurfaced that is eerily similar to Ted Cruz‘s controversial decision to go to Cancun amid the winter storms devastating Texas.

Read more: 24kGoldn laments a broken relationship in the video for “3,2,1”—watch

Over the past few days, Texas has been hit with an unprecedented cold front. As a result, many citizens have been without power and running water as temperatures reach an all-time low. Amidst all of this, Texas Republican Senator Ted Cruz decided to take a trip to Cancun while his constituents continue to suffer without heat and scarce resources.

Now, it looks like another old The Simpsons episode has caught the internet’s attention. As it turns out, Marge In Chains, which aired in 1993, has an eerie similarity to Ted Cruz’s decision to fly to Cancun.

In the episode, Mayor Quimby claims he’s canceling plans for a trip to the Bahamas in an effort to deal with a pandemic that has taken over Springfield. As well, Mayor Quimby tells everyone to stay home. However, he’s actually on the beach, but pretending to be in his office while wearing a jacket over his bathing suit. Eventually, the sound of a steel drum soloist almost gives him away.

Of course, many The Simpsons fans are drawing massive similarities between the episode and Cruz’s decision to fly to Cancun amid the Texas storms.

I don’t really look too deep into those “The Simpsons predicted the future!” type posts but I think they nailed the @tedcruz one. pic.twitter.com/LDGu4NHOtv

Damn the Simpsons even got Ted Cruz pic.twitter.com/8cSH6LpVnT

I suppose when you’ve thrown enough snarks to fill more than 700 episodes you’re bound to get some predictions by accident. But it’s amazing how often the Simpsons call this stuff. Here’s Ted Cruz, erm, I mean Mayor Quimby. pic.twitter.com/SGTDcvMesg

Now, this isn’t the first time The Simpsons has seemingly predicted real-life events. Shortly after the Pro-Trump supporters breached the U.S. Capitol building on Jan. 6, The Simpsons fans pointed out that the show predicted the events that transpired in an episode released in 2020.

Then, in late January, The Simpsons viewers also noticed an eerie similarity between a 21-year-old episode and Kamala Harris’ inauguration. As well, almost two decades ago, the animated show predicted that Donald Trump would eventually become the President.

What are your reactions to Ted Cruz being compared to that old The Simpsons episode? Let us know in the comments below.

Meghan Trainor Reveals Hit Song She Wishes She Didn’t Give Away
ANOHNI Announces New Blacklips Performance Cult Compilation and Book, Shares Songs: Listen
Meg Baird – Furling
Elton John Expands ‘Honky Chateau’ With Live Concert and Demos
Evan Williams on The Way Home: “Prepare for All of Your Expectations to be Flipped Upside Down”