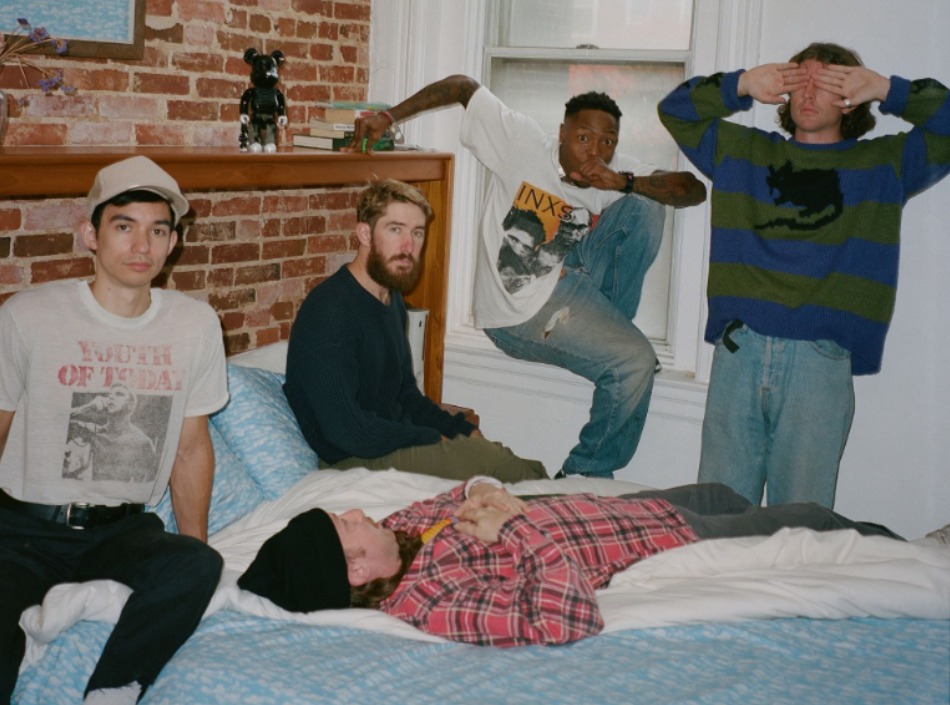 Turnstile are back with that nonstop feeling on their new four-song EP, TURNSTILE LOVE CONNECTION.

The EP, released through Roadrunner Records, is the first collection of songs from the group since their 2018 LP, Time & Space. The release comes with a short film companion piece directed by the group’s lively vocalist, Brendan Yates.

Read more: Against The Current release “AGAIN&AGAIN” ahead of new ‘Fever’ EP–listen

Before the band dropped TURNSTILE LOVE CONNECTION via YouTube, the film was screened across the U.S. at a number of independent theaters. The film, produced by vizionary productions, serves as a sort of 10-minute long music video.

Beginning with “HOLIDAY,” the video opens as members of the band are hanging out in an abandoned high school and football field. The two-step rhythm and vehement energy that has come to characterize the band is at the forefront in this song, and it immediately feels like Turnstile haven’t missed a single beat since their last release.

Read more: 11 artists from the ’70s who formed the frontlines of NYC’s punk scene

A machine-gun kick drum sends the song into the breakdown and subsequent second song, “NO SURPRISE,” where bassist Franz Lyons can be seen singing directly into the camera. With an airy synth solo and a scene depicting a charming little home in the mountains, the song and environment feel ruminative to say the least.

Lyons sung lead on Time & Space’s “Moon,” and similar to the 2018 album, his vocals add a smooth break between the heavy opener and the ramped-down third track, “MYSTERY.”

The film and EP both end on a powerful note with the album’s namesake, “T.L.C. (TURNSTILE LOVE CONNECTION).” This scene features Turnstile doing what they do best—playing with untethered energy in an artificially lit atmosphere. The band end the EP differently than what most fans likely expected, choosing to close with a mellow synth rather than fading out with a heavy breakdown.

The new EP features all of the elements of Nonstop Feeling that have made Turnstile the genre-defining hardcore unit they are today, returning to the explorative instrumentation heard in “Disco” or “Bomb.” With a mixture of hardcore and chillwave tracks, the group prove yet again that they can dip into a multitude of influences.

In addition to teaming up with Australian producer Mall Grab in 2020 to produce a dance-remix version of Time & Space songs, 311 vocalist Nick Hexum also played an acoustic cover of “Blue By You” on his Instagram. The singer kept up with the band since the cover and even went to the premiere of Love Connection at Los Angeles’ collaborative film space Brain Dead Studios.

“Made a love connection with favorite band @turnstiletribe last night,” the lead singer wrote on Instagram. “Their new ep and short film Love Connection is brilliant. Just came out on all platforms today.”

In addition to the new EP and film, the band also announced a host of sold-out shows beginning Aug. 28. That includes appearances at Louder Than Life in Louisville, Kentucky, and Knotfest in Indianola, Iowa. TURNSTILE LOVE CONNECTION is sure to deliver live, especially coming from a band with a reputation for high-energy shows. Dates for the tour can be found below, and tickets can be secured on the band’s website.

What do you think about TURNSTILE LOVE CONNECTION? Watch the video and let us know in the comments below!