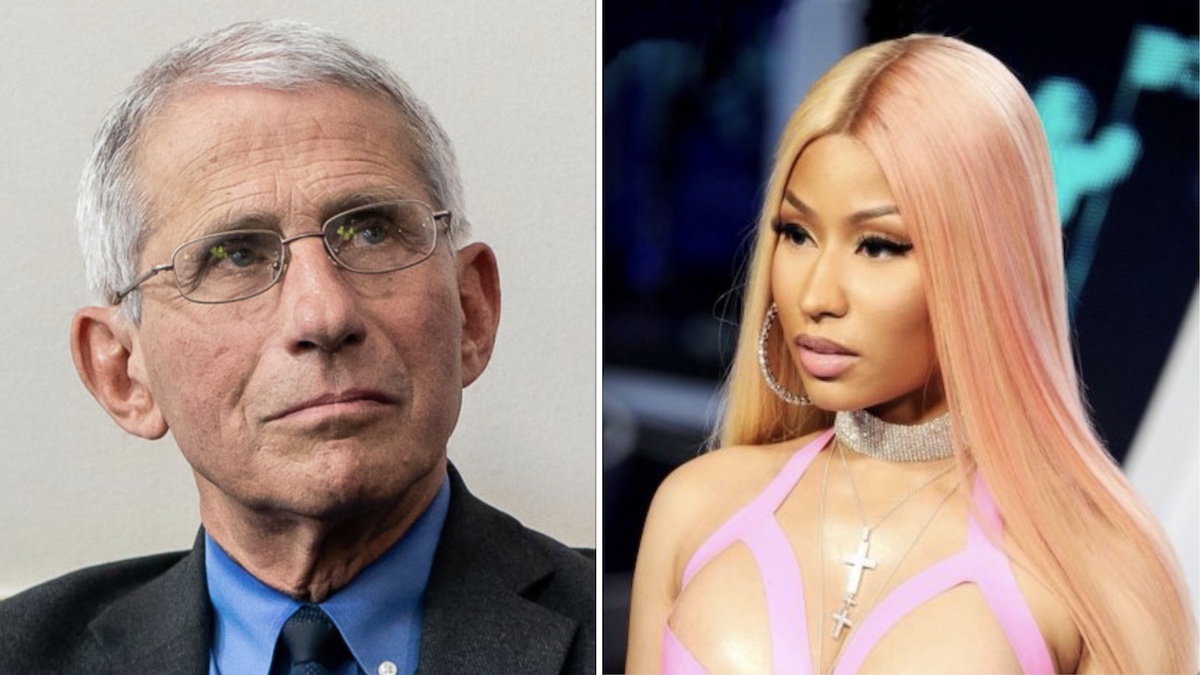 The bizarre episode launched on September 13th, as the first images of the 2021 Met Gala captured the attention of millions. Minaj tweeted that she wouldn’t be attending the fundraiser, because as she said, “They want you to get vaccinated for the Met. if I get vaccinated it won’t [be] for the Met. It’ll be once I feel I’ve done enough research.”

She added that she’s “working on that now,” and asked her followers to wear masks. But then the rapper did two unusual things: she explained the source of her vaccine hesitancy, and she told the whole world about the bulging ball sack of a man she had never met.

As she recounted, her Trinidadian cousin knows a guy. This poor fellow, the story goes, got the COVID-19 vaccine and “became impotent. His testicles became swollen,” and even worse luck, “His friend was weeks away from getting married, now the girl called off the wedding.”

As many of her followers pointed out, either Nicki Minaj’s cousin or his STD-ridden friend are fibbing. But the Met Gala was a big deal and Nicki Minaj has a huge platform, and so it fell on Dr. Fauci to put out the misinformation fire.

Fauci has led he White House’s COVID-19 response through two administrations, and he appeared on CNN with Jake Tapper to discuss more pressing concerns: The safety of children returning to schools, and when kids under the age of 12 would be eligible for vaccination (“sometime in the Fall”).

Then Tapper asked the big question: What does Fauci think of Minaj’s cousin’s buddy’s balls? Specifically, is there any evidence that any of the Pfizer, Moderna, or Johnson & Johnson vaccines cause reproductive issues?

“The answer to that, Jake, is a resounding no,” Fauci said. “There is no evidence that it happens, nor is there any mechanistic reason to imagine that it would happen. So the answer to your question is no.”

Tapper pressed Fauci on what health officials can do to halt the spread of misinformation. “It’s very difficult,” Fauci said. “There is a lot of misinformation, mostly on social media, and the only way we know to counter mis- and disinformation is to provide a lot of correct information and to essentially debunk these kinds of claims.”

He added that the mistake “may be innocent on [Minaj’s] part. I’m not blaming her for anything. But she should be thinking twice about propagating information that really has no basis as except a one-off anecdote. That’s not what science is all about.”

Trinidad & Tobago’s Minister of Health also felt the need to debunk. “There has been no such reported either side effect or adverse event,” the Honourable Terrence Deyalsingh said. “And what was sad about this is that it wasted our time yesterday, trying to track down — because we take all these claims seriously, whether it’s on social media or mainstream media. As we stand now, there is absolutely no reported such side effect or adverse event of testicular swelling in Trinidad or, I dare say, Dr. Hinds, anywhere else. None that we know of anywhere else in the world.”

To Minaj’s credit, she held an ongoing conversation with her fans about the safety of the vaccines, sounding much more jab-curious than anti-vax. She pointed out that, “A lot of countries won’t let ppl work w/o the vaccine,” encouraging her fans in those situations to seek inoculation because, “They have to feed their families.” She added, “I’m sure I’ll b vaccinated as well cuz I have to go on tour, etc.”

This adds to an already colorful summer for Nicki Minaj. Last Friday, her husband Kenneth Petty pleaded guilty for failing to register as a sex offender. Both members of the couple are currently being sued by the victim of his attempted rape for alleged harassment and witness intimidation.

Dr. Anthony Fauci says Covid-19 vaccine approval for children under the age of 12 is “going to be some time in the fall.”

“There will be enough data to apply with an emergency use authorization, both by Pfizer, a little bit later by Moderna.” pic.twitter.com/Wr1EqnDIUL

They want you to get vaccinated for the Met. if I get vaccinated it won’t for the Met. It’ll be once I feel I’ve done enough research. I’m working on that now. In the meantime my loves, be safe. Wear the mask with 2 strings that grips your head & face. Not that loose one 🙏♥️

My cousin in Trinidad won’t get the vaccine cuz his friend got it & became impotent. His testicles became swollen. His friend was weeks away from getting married, now the girl called off the wedding. So just pray on it & make sure you’re comfortable with ur decision, not bullied

I know babe. A lot of countries won’t let ppl work w/o the vaccine. I’d def recommend they get the vaccine. They have to feed their families. I’m sure I’ll b vaccinated as well cuz I have to go on tour, etc. https://t.co/7SK5Df0yBf