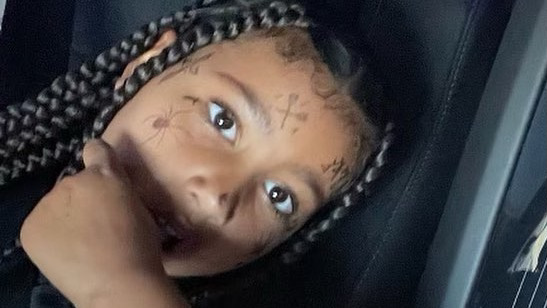 Sure, North West might be the child of one of the most high-profile couples of the 2010s, but rest assured that her upbringing is totally normal: She runs around the house with her siblings, she visits her dad Kanye at work, and she goes through fashion phases that she’ll certainly look back on in embarrassment one day. In a recent interview on the final season of The Ellen DeGeneres Show, mom Kim Kardashian said the 8-year-old has officially gone “full goth.”

In the interview, Kardashian discussed the varying budding interests of her four children. While her three younger kids — Chicago, Psalm, and Saint — are into more standard preoccupations like Paw Patrol and tiny Birkin bags, the eldest Kardashian-West child is taking an edgier route. “She’s into Hot Topic, and she puts fake tattoos on her face, and she listens to Black Sabbath,” Kardashian said. “She’s just a full goth girl.” Because, you know, the two main tenets of goth subculture are…face tattoos and Black Sabbath? Watch a clip from the interview below.

Now that the rock renaissance is in full swing, it honestly makes sense that North might choose to adopt a darker look. Her aunt Kourtney was even recently spotted donning a Cannibal Corpse t-shirt during an outing with beau Travis Barker, a choice that led the metal band’s vocalist to deem her a “poser.” We’re not here to gatekeep, but let’s just hope Robert Smith doesn’t find out about North going “goth.”