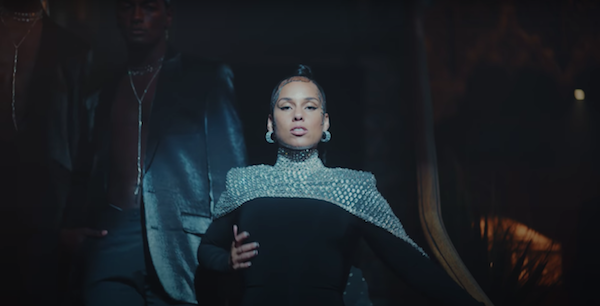 If you want a peek into how Alicia Keys throws a party, take note of her new video “LALA (Unlocked)” featuring Swae Lee.

Directed by husband and wife duo Sylvia Zakhary and Sing J. Lee, the visual gives viewers a glimpse into her world, seen above. The video begins with Keys commanding the guests’ attention atop an ornate balcony. Then, with a four gentlemen crew in tow, she saunters down the staircase in a black dress with a cap garnished in crystals.

As the party commences, the star-studded guest appearances unfold throughout the party. Celebrity sightings include her husband, Swizz Beatz, Khalid, and Lucky Daye.

Keys premiered the song earlier this month, shortly followed by a debut live performance of the song at this year’s MTV Video Music Awards.