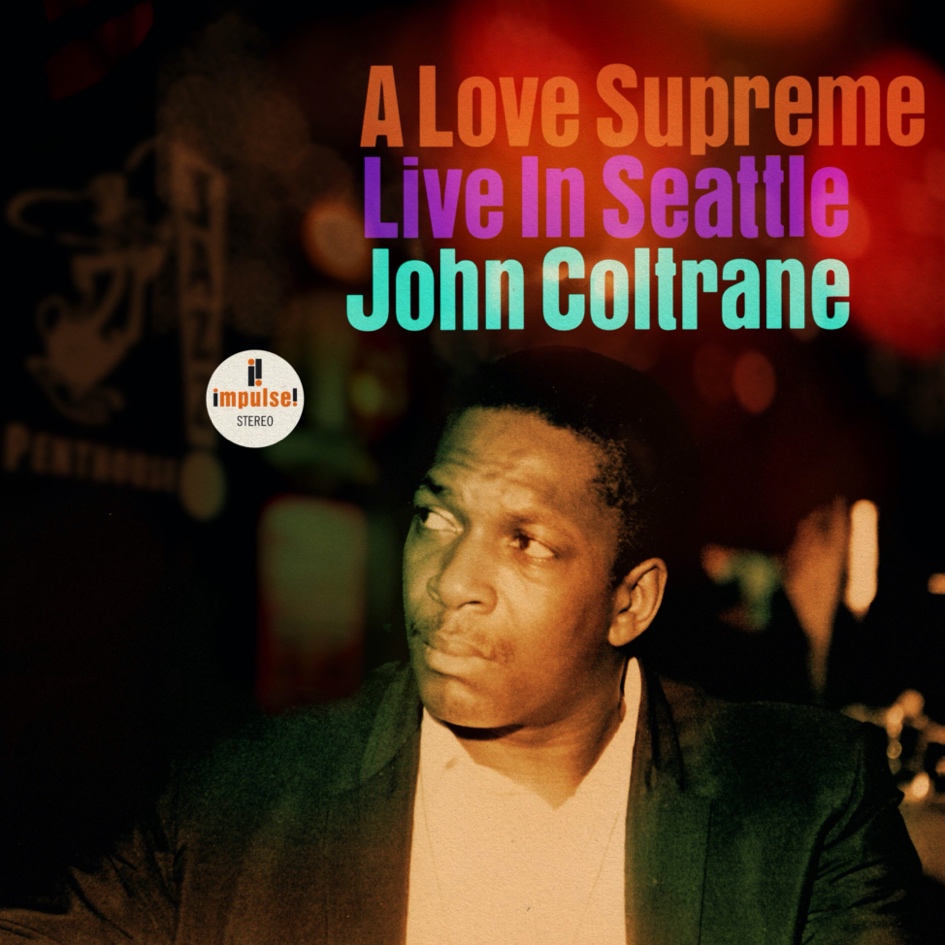 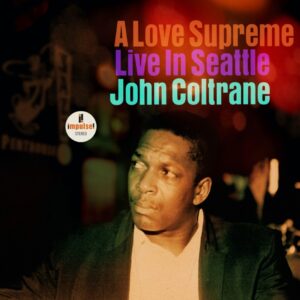 A Love Supreme was John Coltrane’s magnum opus. Now, having been hidden for more than fifty years, comes a live recording of this four-part suite in its entirety. It’s a seminal document of music history. Gordon Rutherford reviews for Louder Than War.

“We’re all human beings. Our spirituality can express itself any way and anywhere; you can get religion in a bar or jazz club as much as you can in a church. A Love Supreme is always a spiritual experience, wherever you hear it.” – Elvin Jones, 2002.

There’s a moment – a split second – in John Coltrane’s 1965 magnum opus, A Love Supreme, that stands as the single most remarkable instant in all music history. It occurs twenty seconds into the second track, Resolution, and it literally takes the breath away. Nothing else before or since has that immediacy, that devastating impact that Coltrane’s saxophone has at that precise moment in time. Of course, A Love Supreme would probably still be one of the finest half dozen albums ever recorded had that moment not been conceived. But it sure as hell helps.

A Love Supreme is a body of work that is virtually unparalleled and, obviously, any album of this status which happens to be captured live in its entirety would be notable. But this is another level altogether, thanks to the most incredible story relating to this recording. Despite its fame, Coltrane seldom publicly performed the four-part suite that comprises A Love Supreme. The only recorded public performance, which was released almost twenty years ago now, was captured at the Juan-les-Pins festival in July 1965. Until now, that is. Because a Seattle-based saxophonist and educator named Joe Brazil just happened to possess the jazz equivalent of the Koh-i-noor. On 2nd October 1965, a Saturday night at The Penthouse nightclub in Seattle, Brazil’s group opened for Coltrane and his band. As he often did, Brazil recorded his own set on the club’s Ampex reel. Tonight, because of the identity of the headliner, Brazil decided to keep the tape rolling. What he captured was a set that constituted A Love Supreme in its entirety, extended with solos and interludes. Incredibly, this seminal moment was witnessed by only about three hundred people.

Over the next few years, Brazil would privately, very occasionally, play the tapes for some very fortunate friends and students. Sadly, he passed away in 2008, whereupon his widow, Virginia, asked saxophonist and friend of the family, Steve Griggs, to sort through and digitise Joe’s extensive tape collection. The Coltrane set was discovered. Now available, fittingly, on Impulse Records, the label behind the original, is the recording of that show. It’s almost miraculous that we are able to listen to A Love Supreme: Live In Seattle. Equally miraculous, given the circumstances, is the sound quality of this recording, which is extraordinarily good.

Many of the key features of the original A Love Supreme are captured in this performance, however, this is no faithful recreation. Instead, there is so much more going on here. That’s normal in such an improvisational environment; typically, every show is slightly different each night. But this performance is bigger, more expansive, more chaotic than the studio cut of the album, understandably so given the changes in the line-up. The classic quartet of Coltrane, McCoy Tyner (piano), Jimmy Garrison (bass) and Elvin Jones (drums), together since 1961, are all present. But that core sound is significantly augmented by the addition of a second bassist, Donald Rafael Garrett, Carlos Ward on alto sax and a young Pharoah Sanders (a Mercury Prize nominee just last month) on tenor sax. That’s a lot of fresh ingredients to chuck into the stew. No wonder it tastes different.

Aficionados of the original studio version will have the opening thirty seconds of the album ingrained in their heads forever. Acknowledgement opens with a gong crashing in and Coltrane’s intro, followed by that iconic four-note motif courtesy of Jimmy Garrison’s bass that lays the foundation for the entire track. It’s special. Things don’t unfold that way on Live In Seattle. Instead, we are treated to the sound of the band warming up, getting into their groove for the seventy-five minutes or so that lie ahead. It’s disjointed, but it’s a beautiful slice of authentic realism that transports you to The Penthouse on that October Saturday night. A magical realism, if you will. Gradually, it starts to come together. The role of the two bassists is immediately clear as one picks (probably Garrison given what’s coming) whilst the other (Garrett) bows. The bowed bass brings another dimension. A cowbell, probably played by Coltrane, sets the tempo for Jones. And then, when everyone is ready, just over two minutes in, Garrison starts his riff. Those iconic four notes. The show is underway and you are immediately struck by the realisation that the overall sound is bigger, more urgent, more visceral. Rawer. In one way it’s thrilling, but I’ve always been in love with the sheer purity of the studio version which makes it hard for me to devote myself entirely and eternally to this.

At the top of this piece I spoke about ‘that moment’ as Resolution takes off. When I first got the tape for Live In Seattle it was the first place I went to and, just like Acknowledgement, it’s different. It is preceded by Interlude 1, which is primarily the basses of Garrison and Garrett sparring together, one higher up the neck. This sets the scene for that seminal Coltrane moment which, whilst still brilliant, somehow doesn’t match the impact of the studio version. To compensate, however, Coltrane and Sanders scorch a trail through the track. It is dizzyingly, dazzlingly electrifying.

An urgent performance of Pursuance follows. The tempo of this version seems to be double that of the studio version and you get a real sense that the band are now feeding off the energy of each other and the audience in this tiny club. Sanders, the young firebrand is given his head and solos with ferocity. Jones seems intent on pushing the tempo even further as McCoy pounds the keys dramatically. Psalm begins with that stirring and unmistakable horn of Coltrane. Of the four parts of this performance, it is Psalm that stays closest to its spiritual original. As it draws to its conclusion, one-by-one, the band members drop out until a bass wanders on. “Is that the end?” one of the musicians ask. “It better be”, laughs Coltrane. His words mark the completion of this remarkable concert.

Those familiar with the original studio version will, quite naturally, draw comparisons between the two versions. Inevitably, people will have their favourites. Personally, whilst I love Live In Seattle, I favour the studio version, simply because Coltrane saw A Love Supreme not just as another album, but as a gift to God. Coltrane described it as “a humble offering to Him”. Check the Elvin Jones quote again at the top of this piece. “A Love Supreme is always a spiritual experience.” There is something special about it, something that draws the listener unfailingly towards its spiritual centre. The space and crystal clarity of the studio version lend itself to that aspiration slightly more than the live recordings (both Live In Seattle and Juan-les-Pins). But we are comparing works of high art here. It’s like balancing Picasso’s Guernica with Liberty Leading The People by Delacroix. Because one is preferable to the eye doesn’t make the other substandard.

A Love Supreme: Live In Seattle would be a worthy addition to anyone’s collection. Firstly, it’s an iconic piece of music history captured, thankfully, for all time and it’s worth owning the album for that alone. Musically speaking, those who possess and love the original will revel in this extended live version. Notwithstanding that, there will be people exploring the works of John Coltrane for the first time. To them, I would wholeheartedly recommend hearing A Love Supreme for the first time as its creator intended, i.e. on the original studio version. It is quite a revelation.

Finally, a word for Impulse Records and American music historian, Ashley Kahn. The design and quality of the packaging of this album is nothing short of stunning. Kudos to London-based Intro for outstanding creative direction and design. The liner notes were composed by Kahn and they are also utterly magnificent. Such meticulous detail. Such love. It is worth investing in the album for Kahn’s liner notes alone and I’m not ashamed to say that I found them incredibly helpful in writing this piece. A great album deserves great packaging and this delivers.

All words by Gordon Rutherford. More writing by Gordon can be found in his archive.