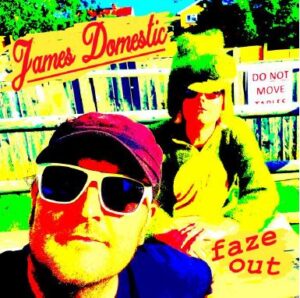 Faze Out, the first digital single by James Domestic hit Spotify and other platforms on 15th October and to accompany it there is an un-nerving seasick inducing video.

Drifting in with an echoey honk that is almost dub siren (check the Treasure Isle t-shirt and copy of Bass Culture on James’ desk in the vid), a fuzz guitar hammers in to announce the start of the song proper. With its cheezy keyboard, robotic beats, and fuzzbox driven guitar in the background the song has elements of early post-punkers like The Fall and a hint of Devo and The Screamers. The song simultaneously taps into the Angry British Bloke zeitgeist that brought us Sleaford Mods and Benefits. The key difference is that Faze Out is delivered in proper facking Essex speak (according to The Register, the sexiest of regional accents) rather than a Northern or Midlands drawl.  It’s not just grim up North.  Only a minority are sipping champagne on their yachts in the South East.

The sardonic spoken narrative gives way to James’ more familiar shouting on the chrous – recognisable from records by Domestics, Tokyo Lungs et al. The subtext of this nihilistic doom-laden ditty is that life is out to get you and you’re fucked.

James, also the head honcho at Kibou Records, told me he was experimenting with a digital single because “vinyl pressing times are RIDICULOUS right now”. The song is taken from the upcoming album ‘Carrion Repeating’ due in physical format in April on Kibou and TNS in the UK and Amok in Germany.

Faze Out is available on streaming platforms. people who sign up to the mailing list on the James Domestic website are eligible for freebies and first dibs on stuff. “Genuinely worth it!” said the man himself.

Words by Nathan Brown. Check out his Louder Than War Author Archive.

Miley Cyrus on just making the cut for Forbes’ 30 Under 30 List: “It was now or never”
Selena Gomez’s ‘Who Says’ Was First Recorded By Jordin Sparks
Halsey Wants To “Reinvent My Genre”
A Christmas Dance Reunion Review: Coleman & Bleu Bring the Nostalgia, Charm, & Sizzling Chemistry!
The Most Uplifting RnB Tracks of All Time