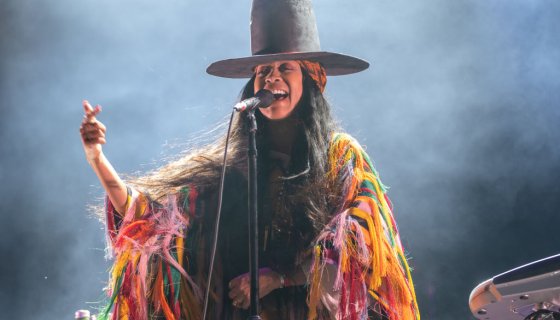 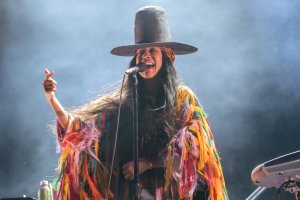 Erykah Badu has been one of the most compelling artists of her era and of all time for well over two decades, and she continues to find creative ways to bring her innovation and vision to the masses. Today (October 20), the talented singer, songwriter, producer, and DJ launched her new BADUBOTRON Radio station on Sonos, and she graciously spoke with during a media event earlier this week to share details of what to expect.

Badu, radiantly beautiful as always, took time out of her busy touring schedule to speak with media during a roundtable discussion moderated by Carmel Holt, host of SHEROES MIXTAPE MEMOIR as part of the Sonos original programming lineup.

Taking a break to speak via video from her bus during the Live From BADUBOTRON 2021 AD Tour, Badu took questions from Hip-Hop Wired and other esteemed media guests, answering them in her signature breezy fashion.

When Hip-Hop Wired asked if she’ll do some callbacks to the genre of music she helped revolutionize or to feature a wider array of influences both old and new, Badu clearly stated that she’ll be taking a varied approach to curating the sound of BADUBOTRON Radio.

“I just want to play a variety of things,” Badu stated. “I can relate to so many artists and [styles of] music, so many genres. I can do a little bit of everything that’s in the same sonic frequency to me. Whether it’s a song with two sticks and a paper bag or a full orchestra piece, if it’s in the same sonic space, I want to give that to you, especially if it makes me feel a certain way.”

Badu explained in the chat that while she hasn’t released a flurry of music since releasing her 2015 mixtape, But You Can’t Use My Phone, she is continuing to pen new music and travels with a mobile studio team while on tour and has several tracks in the vault. Hip-Hop Wired asked if any of those tunes will see the light of day on BADUBOTRON Radio.

“Yes, Badu P*ssy [Incense] has a commercial that we just composed that will air on the station in the rotation,” Badu shared. “And a lot of the intros are original compositions and the ideas and other spots were created specifically for BADUBOTRON Radio.”

Badu also said to us that her DJ Lo Down Loretta Brown persona will be making an appearance in a future episode of BADUBOTRON Radio, and said that it’ll be the first live set that Sonos will put on. In a humorous moment, Badu said that Sonos wasn’t aware of that plan until Hip-Hop Wired posed the question.

Speaking of incense and all other wares, fans can expect a new BADUBOTRON scent that’s forthcoming, and Badu also has a nice line of stylish merch and accessories via her Badu World Market page. Find that site by following this link.

Peep the flyness of BADUBOTRON Radio below