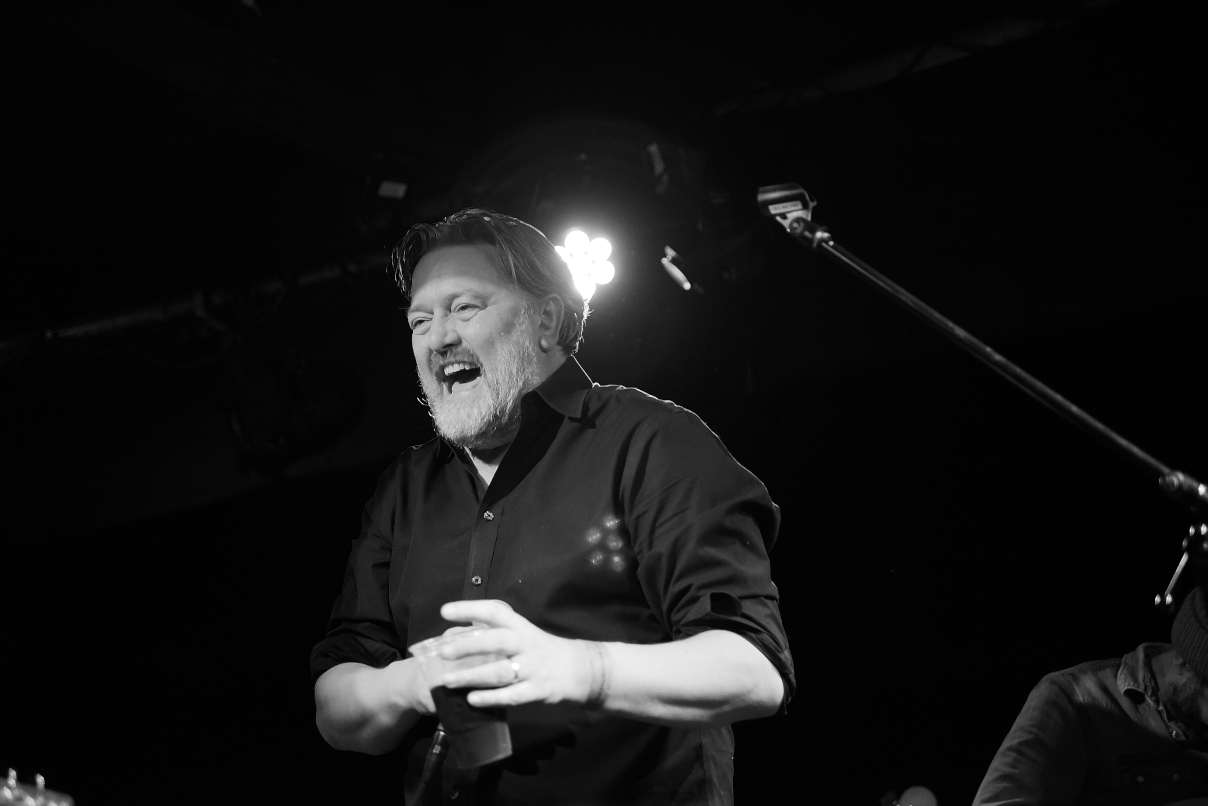 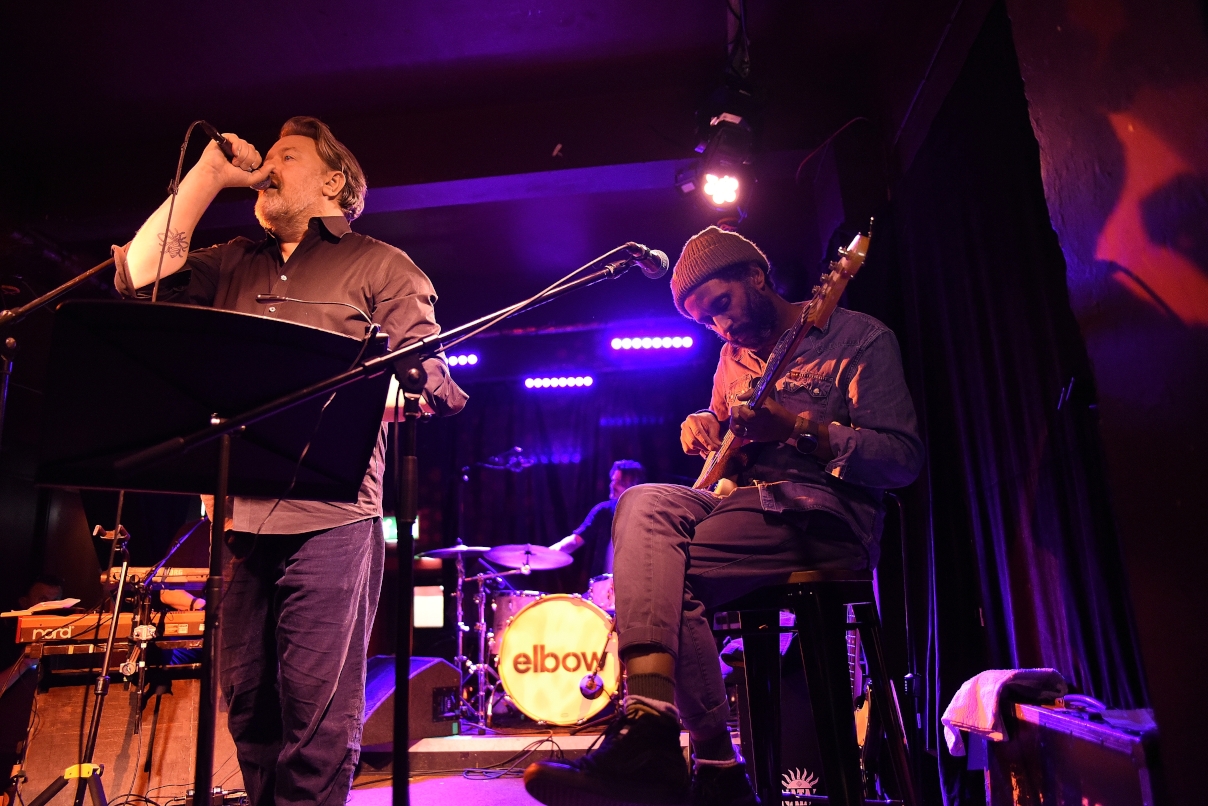 People always say “You couldn’t write this” when witnessing something like tonight. Well, guess what? I’m fucking writing this and can only say it’s a legendary night of Phoenix Nights theatrics and immense magic from one of the best live acts going. Elbow. Wayne AF Carey is privileged to be there and take it all in…

Fuckin’ ell I’m still recovering after a post-gig night out with a Mysterine and a Blinder then I get the news that some twat who’s decided to live next to a music venue has been on to the council for a noise abatement notice on one of the best-loved venues in town. I’ll tell you something for nothing. Fuck off back to where you lived in your privileged existence you miserable bastard. If you live in a city centre you should relish the fact that you are in the heart of a thriving scene. Where were you when we were all stumbling out of The Hacienda and Sankeys Soap into a lock-in before the sunrise? Exactly. Rant over.

Anyway, tonight is all about Elbow. Overblown big band with dull music anyone? That’s what some of our critics say. Don’t get carried away. Guy Garvey has never been the big headed twat who wanted to wear the same clothes as Bono or the bloke who’s got a daughter called Apple. He’s stayed true to the grassroots scene throughout his career, always staying close to the people that made him the person he is today. From the early days of getting pissed in Big Hands with a coconut, he couldn’t crack and having Christmas parties with his Skinny Dog Records mates. Genuine.

Tonight it’s all about the venue that looked after Elbow from the early days as they have with a lot of bands that needed an early platform. Jay Taylor the proprietor has kept things real in the Jan way by keeping it real with his support of grassroots. Elbow are back tonight after a Save Our Music Venues raffle during lockdown, which serves as a massive treat to people who have supported the cause. I arrive with my slap head gig buddy and there’s a queue going on to actually get in. There’s a bloke on a balcony above Piccadilly Records who’s wondering what’s going on, bemused people walking past with enquiring minds as to what’s unfolding tonight. It’s a scene I’ve not seen for a while.

There’s no support tonight as I’m informed which makes no difference as Elbow take a good hour and a bit to hit the stage. I can see a fuckin’ silver bucket being handed around before the gig starts which raises a question or two. Go no further! Guy Garvey and his merry men take to the stage and it’s announced that there’s a lucky dip going on for songs with the said bucket! I mention to a bloke in front of me that I’ve seen the set list and he enquires whether Jesus Is A Rochdale Girl is on it. If it is he says he will cry… The bucket does the rounds and said song is pulled out! He nearly fainted. A top start to a top notch set of Elbow favourites. Empire is the fuckin’ dog bollocks and is ended by a great speech about Guy’s great friend Brian Glancy (seldom seen kid) and how he’s missed greatly. Next tune up is an amazing Magnificent which sends shivers up the spine and sounds so powerful in this tiny venue.

Guy then gets funky with the bucket and Great Expectations is next up, a tale about the 135 bus route from Bury into town, which we all know was the bus Mark E Smith probably decked on once in a while. As I’m writing this Nils Van Linden is telling me about seeing Elbow at The Hammersmith Odeon on our very own Louder Than War radio show. How fuckin’ uncanny is that? Anyway, I’m banging on about bollocks here. The bucket goes out again and Kate who is the lucky bucket recipient shouts Leaders Of The Free World (it’s not on the set list) Guy Garvey: “You lying bastard!” It is a night of comedy and music that excels when they launch into the brilliant Lippy Kids, talk about the bucket of fate, do an excellent Puncture Repair and keep going with the funny as fuck banter.

I can’t go through every moment of the gig as it’s a staggering night I’ll never forget, however, Mirrorball is just stunning as is a majestic Sad Captain which resonates across the audience with it’s beauty. What makes me laugh about the whole night is that they don’t have to do the big hitters for the normals, no One Day Like This thank fuck, yet they do Grounds For Divorce which sounds fuckin’ mental and one of my favourite Elbow tunes Fugitive Motel. I will twat Guy Garvey and co for not doing Mexican Stand Off though! An absolute cracking night, a great audience and an appearance from my old mate Stan Chow which made the whole night special.

Words by Wayne Carey, Reviews Editor for Louder Than War. His author profile is here