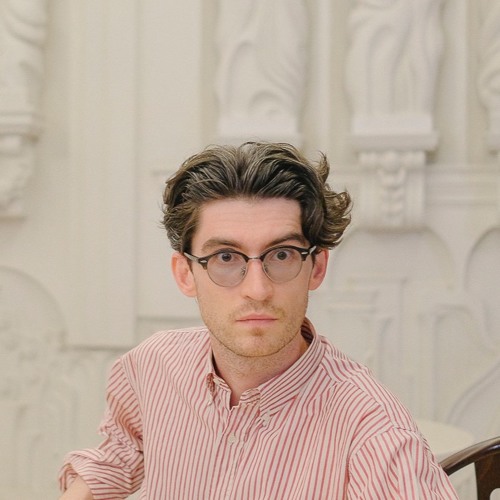 Dima Midborn has successfully cultivated a sound of his own, fully established and wholly unorthodox. Plying his trade primarily as a bassist for alternative pop acts such as On-The-Go and Inturist in his native Russia, Midborn’s solo work is a step away from the pop scene, more avant-garde in approach and less polished in finish. At the centre of it all is the bass guitar. Midborn’s virtuosic bass playing inhabits a world entirely of his own making. Harbouring a penchant for dashing outfits and deadpan eccentricity, he presents an alluring musical figure.

His last full-length project – 2020’s Middle Aged Man – thrived on rustic glamour, utilising ligneous percussion below searching melodies. One year, an EP and several singles later and the Russian bassist is taking a more ‘in your face’ approach, with danceable riffs and pop song structures galore on his new album, Quality Leisure. Gone are the organic clicks and clops – in their place a punchy, mechanical drum machine. Yet despite the changes in rhythm, Midborn’s sound is still instantly recognisable, given away by infectious, fluctuating basslines and the squawking bass clarinet of Andrey Bessonov (a combination that came to the fore on previous EP, Bazaru Zero).

On Quality Leisure, Midborn is best when he’s partying, going on full-on funk with all the oddball attitude and confidence of a rebellious prince. Lead single Event sets this tone early on, boasting one of the bassist’s finest riffs to date and building to a chaotic disco beat finale. Armed with a Roland TR-505, Midborn is able to craft inspired inhuman rhythms, particularly noticeable on Hard, where the full range of the machine is put to the test with synthesized bongos and samba-style polyrhythms.

Adding to the fray is Midborn’s baritone voice. It’s perhaps the least expressive sound on the album, an inscrutable presence amongst the instrumental idiosyncrasies. For the most part this works well, grounding the album and allowing the more uncommon noises to shine. The mostly monophonic instrumentation of Quality Leisure results in a sparse, minimal atmosphere, and means Midborn has to work extremely hard to maintain interest.

This is where Bessenov comes into play, unleashing forays of clarinet craziness on tracks like Sidewise and the wandering Feeling. It’s hard to imagine what this album might sound like without his ubiquitous presence. Midborn must take some of the credit here, for showing restraint on his own album to allow room for Bessenov’s masterful outbursts, and employing a theoretically absurd combination of bass guitar and bass clarinet in the first place.

It culminates in a wonderfully surprising album; a step forward that doesn’t lose what made the previous records so enticing. There may be a core musical idea here – the idea of bass on bass – but it is regularly pushed in the most interesting direction. Dima Midborn has set himself high standards, and though not every song on Quality Leisure reaches them, others mark some of his best work, making this