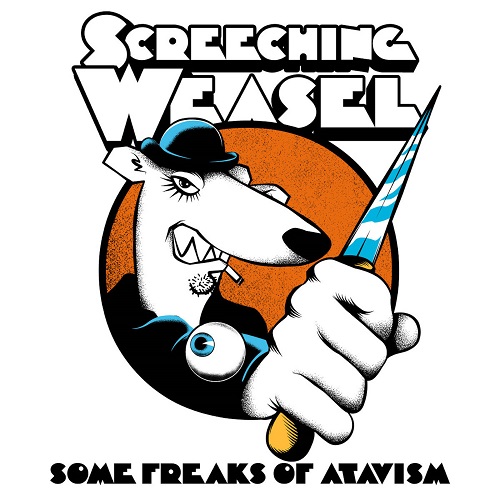 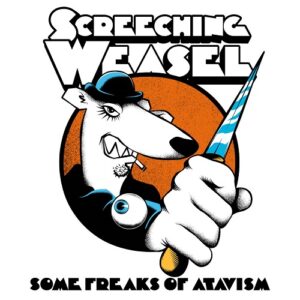 Screeching Weasel: Some Freaks Of Atavism

US pop-punk rockers Screeching Weasel get a physical re-release of their latest album Some Freaks Of Atavism.

It may have initially been released last year, but the latest album dropped in my inbox very recently by way of the top power punk-pop garage label Rum Bar Records and, after scouting around the web, their new CD issue of Screeching Weasel’s latest album, Some Freaks Of Atavism, might be the only way to grab yourself a physical version as the LP versions look to have been snapped up already. And seconds after hitting play, it’s easy to see why. The latest album from Ben Weasel and co. is a masterclass in pure and unadulterated punk-pop and their best album in some time. Any young upstarts who got their first beginner’s electric guitar and amp practice set from Saint Nick in search of learning how to play riotous snotty upstart bubblegum punk would be advised to stick the first two tracks from this album on constant repeat. Man, what a start to an album with the double-barreled unloading of She Ain’t Your Baby and Back Of Your Head. Hang on…let me just stick those two on again. They are classic Weasels’ tunes already, two of the greatest tracks they’ve written.

The whole album cuts smartly through the fog of adulthood and takes me right back to my own pop-punk puberty, blasting out Lookout Records samplers from my bedroom, plugging in and firing through the power chord blasts of albums like Kerplunk!, Punk In Drublic and, of course, the Weasels’ own Wiggle. On this latest album, songs like Settle In, Turn It Around, and Dead By Dawn take me back there in an instant. There are no pretensions, just the desire to get together with mates and blast through hi-octane rock ‘n’ roll. There are times, especially nowadays, when it’s all we need, the near-perfect antidote, pure distraction. But it’s not all 100 miles an hour chugging bubblegum punk. As the album nears the end, they pull out their secret weapon in the form of Problematic, a bouncy take on classic 50’s jiving dancehall rock ‘n’ roll. It calls back to the mid-album Losing My Mind which drops a similar groove.

Some Freaks Of Atavism is a welcome return from a band and songwriter that are hitting incredible form once again.