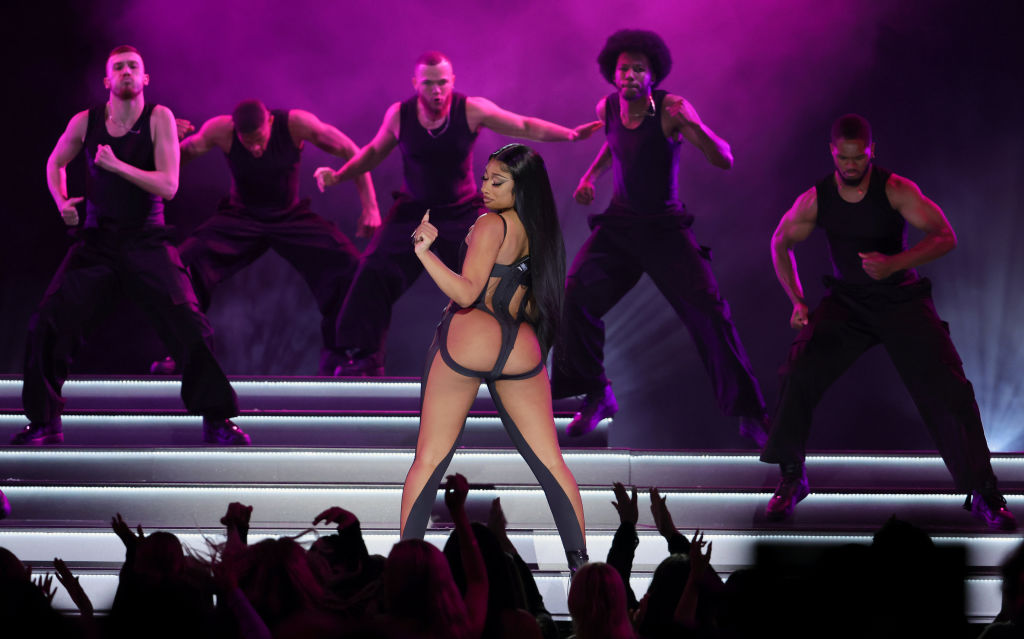 Megan Thee Stallion and her incredible cheeks were the perfect choices for Mugler’s Spring Summer 2022 campaign.

Mugler and Megan Thee Stallion Are Perfect Together

In the nearly 10-minute video, Thee Stallion can be seen rocking a denim corset and ass-less jeans that would make the late Prince incredibly proud. The denim is complimented with sheer mesh paneling that has become a staple with any of the late Thierry Mugler’s designs.

Speaking with Interview, creative director Casey Cadwallader broke down Megan Thee Stallion’s denim look. “The jeans have always had this strap that goes under the bum that’s like a body-shaping, lifting mechanism,” the designer said.

“We left the denim part under the bum because if you’re going to show off your butt, you have to lift it up. We made one pair, and when we saw them in the fitting and everyone was just like, ‘Oh my god, are we doing this?’ And I was like, ‘Yes, we are.”

The vibe throughout the torso. solutions directed is “ball inspired,” and that is evident based on the dance moves and movements.

The short film ends with a tribute to the late designer who passed away in January. Ballerina Maria Kochetkova and Vogueing star Barbie Swaee honor Thierry Mugler by rocking vintage designs. Cadwallader called the dance moves a “call-and-response” and described the performance as a “embodies the magnetic duality of the Mugler legacy.”

Megan Thee Stallion has been sporting a lot of Mugler lately. She rocked the late designer’s fits during a performance of her latest single, “Plan B,” during the Billboard Music Awards and in the visual for her latest anthem.

You can watch the entire Mugler Spring Summer 2022 Film below.