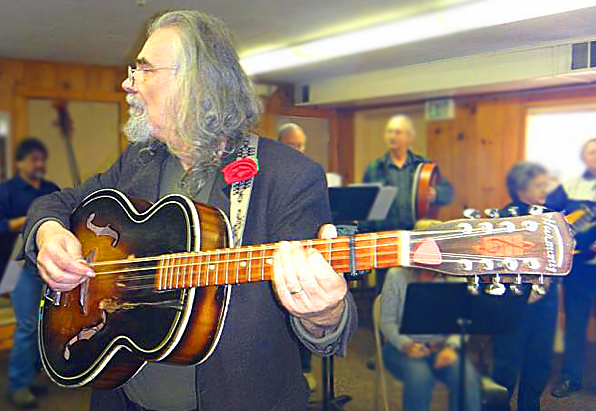 David Nigel Lloyd’s songwriting brings us the same overall storytelling value in ten songs as virtually any novelist working today. The scope of his lyrical reflections and narratives is often so blessed with a wealth of detail that it makes tidy summation in review form an unenviable chore. It is best to consider the collection’s foundations before moving forward.

Of Service in Rosemary Lane is one part original song collection with nods, overt and otherwise, to select artists scattered amongst the self-penned fare. Another facet of the release is creative exercise. Lloyd self-consciously adopts the same approach to recording, especially key tracks apparent as the review unfolds, that guitarist/songwriter Bert Jansch used during the performance and recording of his seminal tune “Rosemary Lane”.

This cornerstone of the Brit “acid folk” movement, the 1971 classic has clearly haunted Lloyd for decades. Jansch’s contemporary Robin Williamson is another major influence on the release, even more so on the general trajectory of Lloyd’s life, however. You can’t help but hear their presence in each of the new release’s ten tracks. “Sweet Nothingness Ask Not” is one of the best songs written for the album and an excellent selection for its opener. It’s difficult to overstate what Lloyd’s singing talents bring to this material and the first tracks make a clear case for why.

His commanding presence manages to never leave listeners feeling cowed. To pull this off while manifesting near-breathtaking immediacy testifies to several aspects of his vocal talent – pitch control, phrasing, and pure gravitas. The opener likewise illustrates his canny understanding of where to place his voice in an acoustic context.

The instrumentation during this song and its follow-up “And Keep Our Foe at Bay” set an early tone that the remainder of the collection lives up to. The latter track, the album’s second, sets the lyrical and storytelling bar for everything that follows as listeners sit spellbound by Lloyd’s engrossing lyrics brimming with fierce passions and dramatic turns. Another exemplary track cut from the same cloth as this is the third track “The Son of Old Rosin the Bow”. His talents with language and verse are apparent as he translates terms and context into lyrics modern listeners can understand and connect with.

His version of “Rosemary Lane” emphasizes Lloyd’s obvious debts to tradition but, more importantly, how he’s transcended those debts. He has his own voice and it comes through even in a cover. “The Streets Are Wet With Tears, Baby” is a wonderfully titled effort, but it’s worth every bit of possible ostentatiousness. Lyrics such as “The early summer sun rose/like a Bicentennial quarter/Her naked body hardly broke/the silence of the water” will leave listeners sensitive to such orchestrations of language likely smiling from ear to ear. Others might say he’s flexing too much poetic muscle when more finesse is required.

You can’t possibly make your mind up about this release after a single listen. Two or three may not even be sufficient. David Nigel Lloyd’s Of Service in Rosemary Lane is the sort of collection that stays with you for years after you’ve first encountered it and, for Lloyd, that may be the greatest compliment.