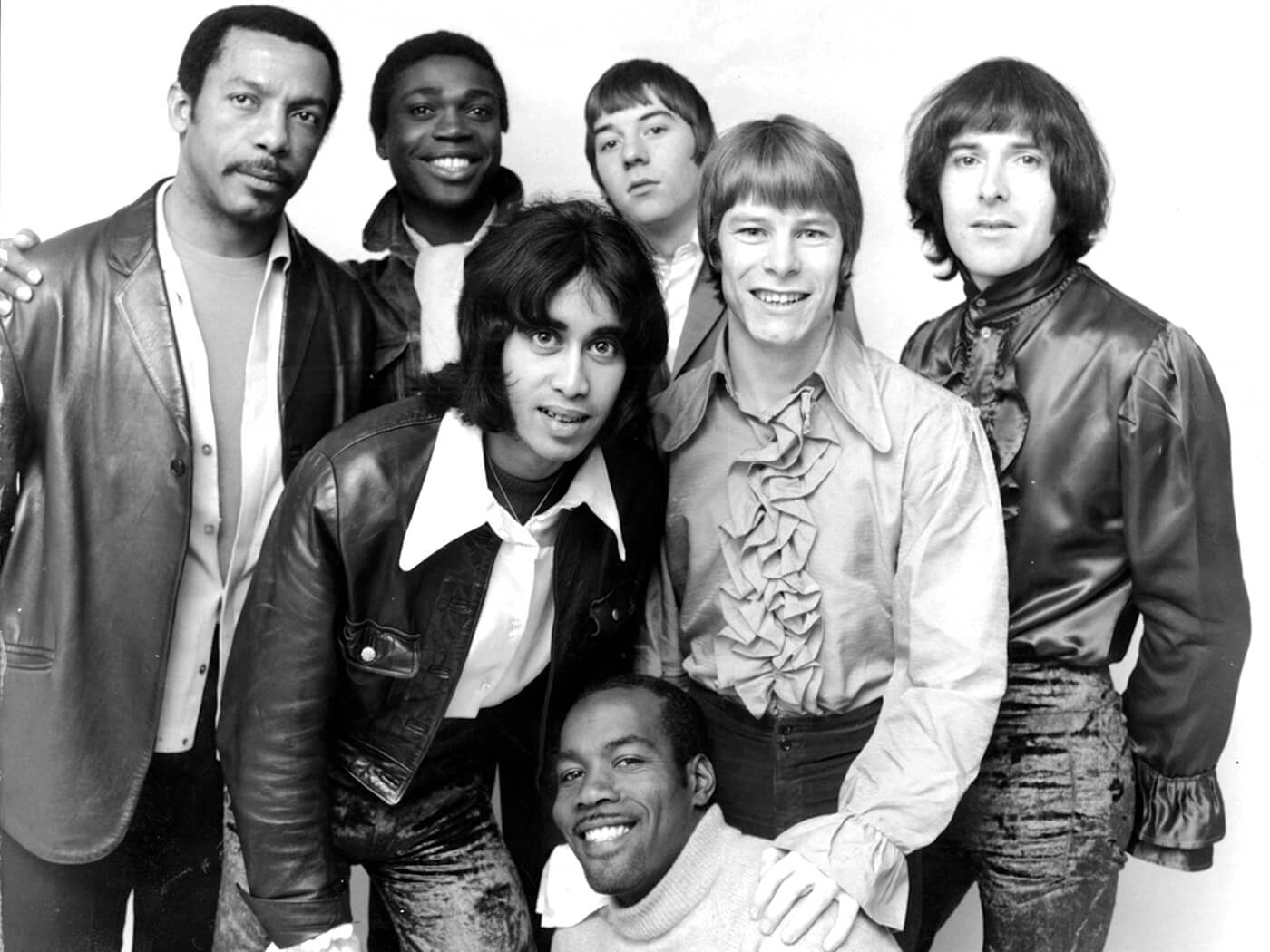 One of the earliest, most noteworthy chart battles in the UK was fought between Bayswater-based The Foundations and their north London contemporaries The Equals, with both bands striving to be the first mixed-ethnicity outfit to make it to number one. The former’s debut release, “Baby, Now That I’ve Found You”, triumphed when it reached the top spot in November 1967, eight months before their rivals’ “Baby, Come Back” followed suit.

The victors had been honing their craft in clubs and dancehalls for two years as The Ramongs and The Ramong Sound. A change of name brought success, but the template remained the same: upbeat soul with singalong, pop-minded aspirations, yet infused with the edgier, grittier elements of Booker T & The MG’s or the house band at Motown’s Hitsville power base.

While The Foundations only troubled the Top 20 on four occasions, the commercial bounciness of their chart-topper, plus “Back On My Feet Again”, “Build Me Up Buttercup” – more of which later – and “In The Bad, Bad Old Days” only tells part of the story outlined on this 3CD anthology. They’re particularly in their element on the frenzied “Jerkin’ The Dog” (previously a minor US hit for R&B showman The Mighty Hannibal), and the mod strut of “Mr Personality Man”. For the fullest, most vivid portrait of the band in their pomp, the inclusion on this set’s third disc of the ’68 live album Rocking The Foundations is hard to beat. From the Hammond-led funk of the Freddie Scott song that gives this compilation its title, to the horn-blasting howl of Edwin Starr’s “Stop Her On Sight”, it’s a masterclass in how to confidently throw soul-infused shapes across a dance floor.

All was not well in the ranks, however. Shortly before the album’s release, singer Clem Curtis announced he was quitting to try his luck as a solo artist in the US (where he was briefly mentored by Sammy Davis Jr, and played a Las Vegas residency opening for the Righteous Brothers). Diplomatically, he hung around to help run auditions for his replacement, the gig ultimately going to Colin Young. The new boy’s arrival saw the release of the group’s second-biggest hit; like its predecessors, “Build Me Up Buttercup” came from the pen of their longtime producer Tony Macaulay (writing in tandem with Manfred Mann’s own new singer, Mike D’Abo), its structure intentionally aping material Holland-Dozier-Holland were fashioning for The Four Tops – a ploy rewarded by a spell at No 1 in the American trade magazine Cash Box chart.

But the relationship with Macaulay was becoming increasingly strained, largely because of his reluctance to allow the group to contribute self-penned material. The recording of 1969’s Digging The Foundations displeased some members, unhappy with having to play, especially, a version of “Let The Heartaches Begin”, the Macaulay ballad that had been a UK No. 1 for Long John Baldry two years earlier (knocking “Baby, Now That I’ve Found You” off the top spot, in fact) and the producer’s lightweight “That Same Old Feeling”, which would later see chart action when covered by Pickettywitch.

To be fair, The Foundations’ overhaul of the Baldry track has a lot going for it; a quickening of tempo gives the song the air of an early Drifters hit with a smidgen of The Isley Brothers on the side, while the same album’s “Take Away The Emptiness” possesses the finger-clicking fizz of Chairmen Of The Board at their best. Ties with Macaulay were severed the following year (he would go on to write million-sellers for David Soul), and although singles like “Take A Girl Like You”, the theme song to the Hayley Mills movie of the same name, adhered closely to the Macaulay formula, the hits days were over.

The band finally got their wish when the Young-penned “I’m Gonna Be A Rich Man” was chosen as the A-side for what would turn out to be their last single, but while its bluesy psychedelia was representative of the harder direction they wanted to pursue, fans were in no hurry to go with them.

Curtis returned to the UK in the late ’70s to front a new band bearing The Foundations name, resulting in a legal wrangle with a similar ad hoc lineup put together by Young (compilers of this set include recordings by both). Young later toured in another permutation of the group with original guitarist Alan Warner (who still shepherds a lineup today), following renewed interest when “Build Me Up Buttercup” featured prominently in the 1999 comedy There’s Something About Mary. Yet their influence goes further than just their own trailblazing hits: their hybrid of white pop and black soul was a torch carried forward into the ’70s and ’80s by the likes of Hot Chocolate and The Beat, while Lynval Golding of The Specials has cited seeing The Foundations on the Midlands club circuit in the ’60s as a seismic inspiration.