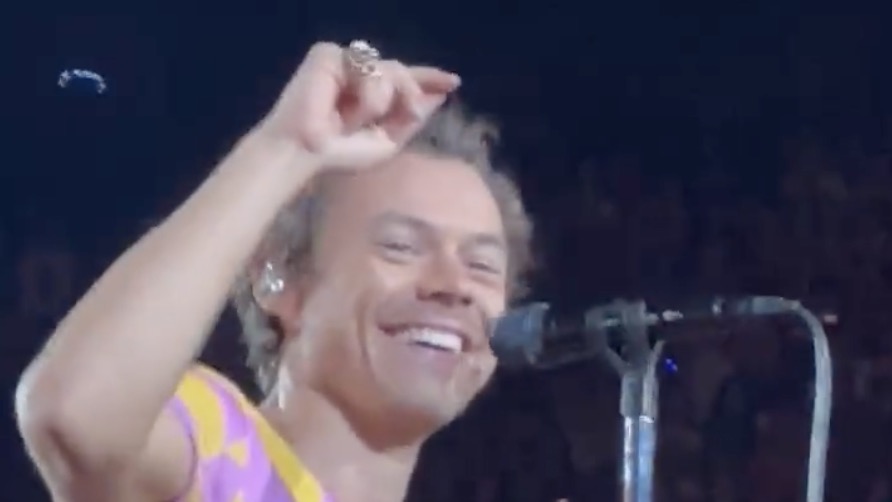 Update – September 7th: Harry Styles joked about the “incident” during his first night back at Madison Square Garden: “It’s wonderful, wonderful, wonderful to be back in New York. I just popped very quickly to Venice to spit on Chris Pine.”

The alleged beef between Florence Pugh and Olivia Wilde wasn’t the only drama surrounding the premiere of Don’t Worry Darling at the Venice Film Festival over the weekend. However, we’re here to set one thing straight: No, Harry Styles did not spit on Chris Pine.

A clip from the premiere went viral on Twitter Monday (September 5th), in which Styles looks like he might’ve discreetly hocked a loogie on Pine as the singer sits down in the theater. At the seat to his right, Pine briefly stops clapping and looks down at his lap in apparent shock: “#HarryStyles appears to spit on Chris Pine i won’t sleep until i know the truth,” one user wrote. It sounds unlikely coming from the UK’s sweetheart, but stranger things have certainly happened.

Harries can rest easy, however, because newly surfaced evidence concludes that Styles, in fact, did not subject anyone to the wrath of his saliva. “People are mental/love drama,” Irish drag queen/online personality Panti Bliss wrote in a quote tweet of the clip. “Nobody spits on anyone. Chris Pine is holding a pen (?) which he puts down on his seat to clap, then realises that the glasses he’s just been looking for have been there on the seat the whole time too. ‘Silly me!’ (then puts them on in longer clip)”

And just in the nick of time, a Styles fan account swooped in to their savior’s defense. In a super-slowed-down edit of the video, you can see that Styles’ mouth was not open at the appropriate angle for launching drool into Pine’s lap, should he have had the audacity to commit such an atrocity. In a longer video, you can also see the moment Pine finds his glasses and chuckles at himself. Which raises another follow-up question: Is Chris Pine OK? See the videos of Styles definitely not spitting on Pine for yourself below.

Pine’s representative has confirmed that Styles did not spit on his fellow actor. “This is a ridiculous story — a complete fabrication and the result of an odd online illusion that is clearly deceiving and allows for foolish speculation,” the rep told PEOPLE. “Just to be clear, Harry Styles did not spit on Chris Pine. There is nothing but respect between these two men and any suggestion otherwise is a blatant attempt to create drama that simply does not exist.”

Styles will resume his newly-expanded “Love On Tour” this week with a clear conscience; check ticket availability over at Ticketmaster, and read our recap of his opening night at Madison Square Garden here. Don’t Worry Darling hits theaters September 23rd.

#HarryStyles appears to spit on Chris Pine i won’t sleep until i know the truth pic.twitter.com/wLXjIHTYgU

People are mental/love drama. Nobody spits on anyone. Chris Pine is holding a pen (?) which he puts down on his seat to clap, then realises that the glasses he’s just been looking for have been there on the seat the whole time too. “Silly me!”
(then puts them on in longer clip) https://t.co/vTEj6o1kJm

Chris pine just wondered where his sunglasses were after the applause. And he zoned out (likes he’s been doing all day) and realised it’s in his lap. So I am sorry to say harry styles did not spit on him. pic.twitter.com/7b4GoCvnHJ