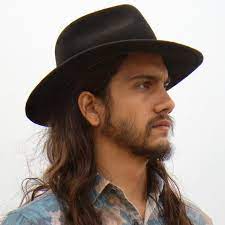 A true artist wears it all on their sleeve not because they want to but because there’s no other way to present what they’ve got to communicate in their medium, and in the new single “Growing Pains,” which was officially released on September 23rd.. we find a stone-cold brilliance in singer/songwriter Andrew Z that definitely has a lot of potential moving forward. Although there’s a lot of interest in indie pop, crossover folk, and experimental singer/songwriter types at the moment, Andrew Z exhibits Howard James Kenny-esque influences in this piece that beg a little more attention than his peers, particularly for those who are keen on surreal poetic depth.

I love that this player isn’t hiding from us in the master mix, as has been the case with a lot of the songs I’ve been reviewing out of his scene in the last few years. He doesn’t want to obscure his melodies with a lot of synthetic nonsense, nor the implication that he doesn’t adhere to an organic compositional framework. I honestly get the feeling he has a lot of respect for the traditional concepts in folk music, but he’s a lot less restrictive with his own creativity than a lot of the creators of such concepts ever were.

Andrew Z’s charisma in the music video for “Growing Pains” is unstoppable, and it certainly made me like both the song as well as the notion of seeing him perform in the future all the more. He’s got a likable personality that can be felt in his connection with the guitar here, and it really adds a feeling of vibrancy to a rather stoic performance I wouldn’t ever expect as much from. Duality and contrast are often cited as important components of smart pop music, and this is a piece that’s able to straddle juxtaposition with much more clarity than anyone has been giving it credit for thus far.

Tremendous emotion can be found in nearly every part of this song, and I appreciate the lengths Andrew Z went to just to ensure that nothing came across as over-rehearsed in the big picture of “Growing Pains.” He sounds as I imagine he would in an impromptu setting, but without the trademark amateurishness that usually befalls a singer/songwriter still trying to break into mainstream credibility. To me, there’s nothing more for this man to prove to us – he’s putting all his cards on the table in this single, and I love what I’m seeing and hearing so far.

If there was any debate over whether or not Andrew Z cared for the populist elements of his scene or even the pop genre as we know it today before the release of “Growing Pains,” I have a good feeling it’s going to be silenced as this song finds a home for itself on college radio. Somebody like Andrew Z was destined for this provocative, hybrid era in singer/songwriter history, and he’s not running away from what feels right and natural in this performance – from where I sit, he’s setting a great standard.