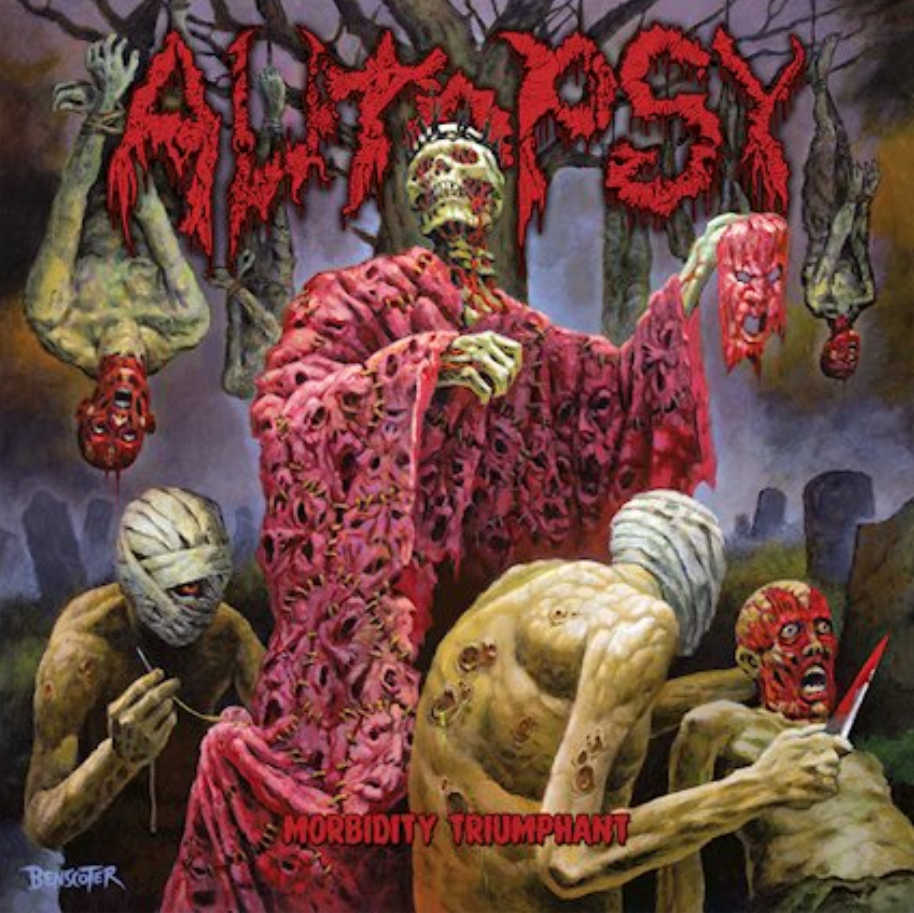 Are you feeling lost in a sea of death metal that feels like “life metal”?! Leave it to the subgenre’s pioneers to reorient you. Autopsy‘s Morbidity Triumphant will take you on a sick journey filled with guts galore, old-school brutality, and maggots! This kickass album not only delivers everything nasty that could possibly be on your wish list, but it will also help you fill a bucket.

Autopsy was formed in 1987 by Chris Reifert, formerly of Chuck Schuldiner’s Death, and Eric Cutler. These California boys made it their mission to lead you into the dark mental alley where the sun never shines. The band signed with Peaceville Records for the release of their first album, Severed Survival (1989), and has been with the respected English label ever since. Although Autopsy broke up in 1995, they recorded a couple of songs together in 2008. The outfit officially reunited the following year.

Morbidity Triumphant is Autopsy’s eighth original studio album and their first since Tourniquets, Hacksaws and Graves (2014). Morbidity Triumphant’s lineup consists of Reifert (vocals, drums), Cutler (vocals, guitars), Danny Coralles (guitars), and Greg Wilkinson (bass). What’s remarkable is that all four current members, except Wilkinson, have been with the group since the ’80s.

Morbidity Triumphant reeks of decomposed remains and damp graveyard soil. Yet, nothing about this mind-blowingly energetic offering betrays the fact that the band has aged.

This quartet of sadistic, blood-hungry predators delivers big time on all fronts. Get ready for some solos from hell; savage, low vocals from the gutter; crushing drums; and bass parts that you just have to dig. The four members form a perfect union within the chaos they spawn.

Morbidity Triumphant is actually quite catchy at times. It will satisfy your cravings for raw aggression, groove, and doom. It will make your eyes burn as if you’ve been pepper-sprayed. You will beg to unsee the gruesome images that Autopsy conjures. After all, the final song promises “Your Eyes Will Turn to Dust.”

Morbidity Triumphant will leave you with a “Tapestry of Scars.” This effort hits you like an ice pick to the head with its fatal opener, “Stab the Brain.” In your paralyzed state, you will have no choice but to intently listen to what follows. The lightning speed and dexterity with which Autopsy changes their tune will shake you like a janky carnival ride. No other album will induce such vertigo and nausea. This sinister record shifts between frenetic assaults and slower moments that envelop you like quicksand.

“Skin by Skin” makes the threat: “This room is now your resting place.” The truth is that anywhere you listen to Morbidity Triumphant is going to turn into your deathbed. It’s enough to make you pass out and hit your head on the way down. There is no track on this album that is not a winner. Morbidity Triumphant proves that Autopsy still reigns supreme. Listen to this gem at full volume. Your neighbors are sure to love it.

Autopsy’s Morbidity Triumphant comes out on September 30 and is available for preorder via Peaceville Records. Listen to the single “Skin by Skin” and a live version of “Maggots in the Mirror” below.