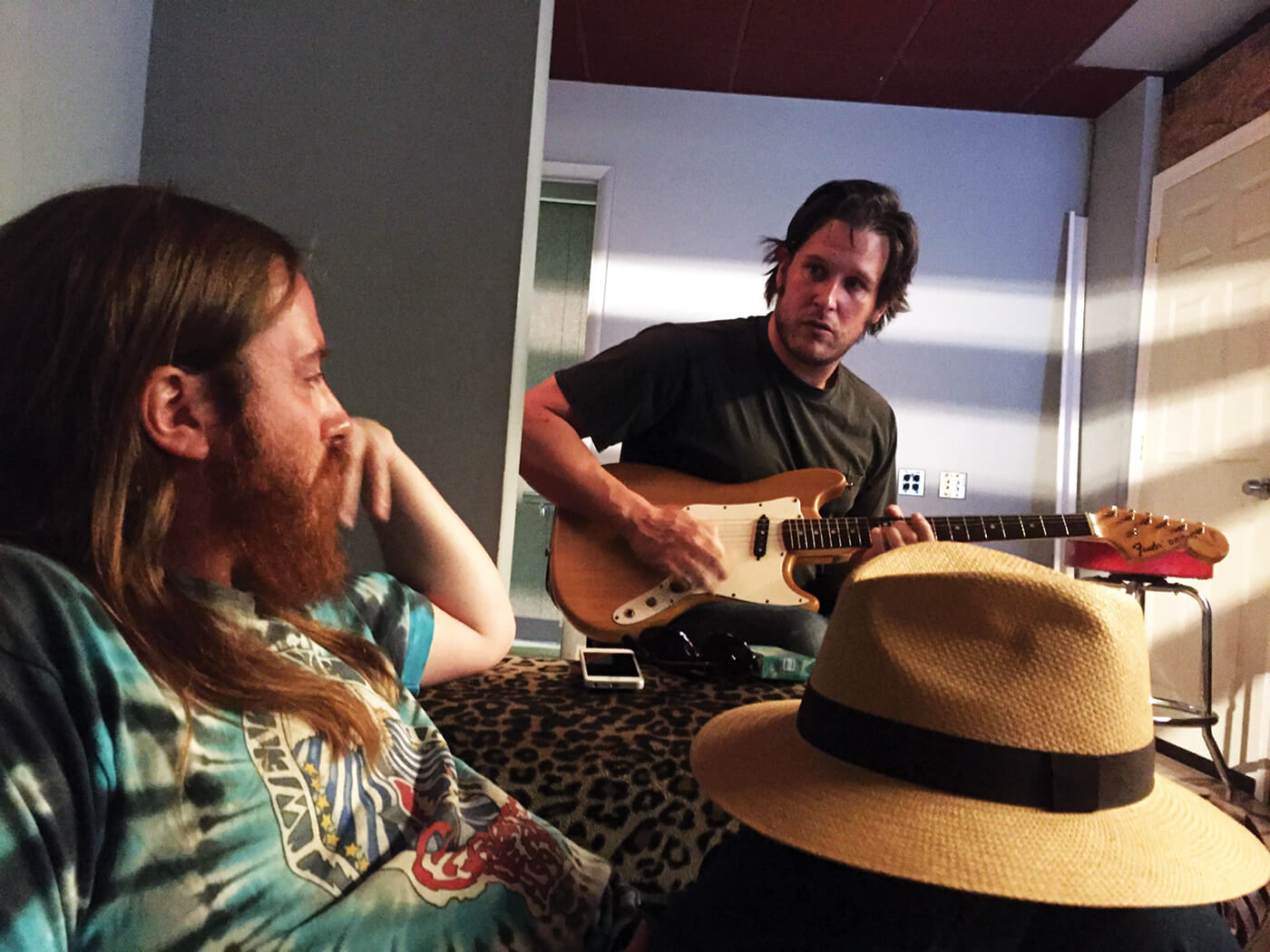 One Eleven Heavy were something of a transatlantic supergroup when they formed a few years ago. James Jackson Toth – aka Wooden Wand, the singer-songwriter behind numerous “New Weird America” outfits like Dunza, Grim Jim, Hassara and James And The Giants – met Bradford-born musician Nick Mitchell Maiato at a Manchester gig in 2010 and instantly bonded over a shared love of Neil Young, Little Feat and the Grateful Dead. After forming a band with assorted members of Royal Trux, Hiss Golden Messenger and Solar Motel Band, they started wearing these influences on their sleeve; the kind of connoisseurs who sonically curate half a century of leftfield Americana.

On Poolside, you can hear shades of everything from Gram Parsons to Willie Nelson, from Michael Hurley to David Crosby, from the Allman Brothers to Santana, with nods to Led Zeppelin, Mike Cooper and the Incredible String Band for good measure. But this is also an album that buzzes with cultural references, both high and low. “You mixed up Lee Majors with Mark E Smith when I said that I liked the Fall guy” is a typically bathetic line, and there are dozens of similar lyrics that namecheck everything from Twin Peaks to Grease, from “Chatanooga Choo Choo” to Little House On The Prairie, from trashy cowboy flicks to dark literary fiction.

The opening track, “Tyrant King”, is apparently inspired by Richard Brautigan’s 1974 novel The Hawkline Monster – a gothic western about two itinerant contract killers hired by a Native American prostitute to murder a supernatural monster. The song manages to turn this dark source material into a piece of joyous, freewheeling Southern rock: one where machismo is a front for terrified, evasive men who are perpetually on the run. It’s followed by a very different kind of American gothic called “Bama Yeti”, a cheery, upbeat, Creedence-style boogie inspired by a news story about a sighting of a sasquatch crossing the Florida/Alabama border.

The band’s sound has changed considerably in recent years. Their first two LPs – 2018’s Everything’s Better and 2019’s Desire Path – sounded like jam-band sessions, recorded quickly in the brief windows of time that all five band members could assemble in a single studio (Mitchell Maiato lives in Spain, Toth and the other band members lived in completely different parts of the US). But, under lockdown, they had to find new ways of working. Poolside was recorded remotely: Toth and Mitchell Maiato swapped audio recordings, sang harmonies on each other’s songs and enlisted Stephen Malkmus’ drummer Jake Morris.

These are more structurally detailed and carefully considered arrangements, often epic in scale. One highlight is “Fruit Loops”, an episodic suite which starts as a swaggering 12/8 Southern rock shuffle, goes into an introspective Pink Floyd-ish breakdown and features a Tropicalia-style interlude. Even the straight-up 12-bar blues workouts, like “Cici”, transform into a hypnotic jabber of musique concrète. Throughout, Mitchell Maiato plays some wonderfully untutored piano parts, often sounding like a demented cat creeping along the keyboard.

Not all the lyrics move into magical realist territory. “Billy” is a wonky piece of tribal glam rock where Mitchell Maiato pays tribute to a faded local rock star whose career has been a failure (“third on the bill and over the hill”) but who remains a hero (“I had to bend my knees to look you in the eye but I still looked up to you”). Two compositions are about recovering from horrific hangovers: “Rizzo In The Wig” appears to narrate a drug-fuelled comedown in a suitably disjointed and funky 6/4 time signature (“I looked at the clock it was 4:89/It was out of the bag, I was legally blind”); while “Plinth” is a chaotic piece of Southern soul about a couple who spend an entire relationship wallowing in endless hangovers (“I remember one time I suggested we fly to somewhere hot in December/You said ‘I’m not a goose’ and walked out of the house/And went off on a three-day bender”).

“Michael Landon” is a piece of storytelling Dylanesque prose set to a tempo-defying piece of Dylanesque vocalese, featuring a violin solo from Sandy Lane, about a journey along a coastal mountain road. It was, apparently, inspired by a drive from Valencia to Benidorm, where Mitchell Maiato witnessed the surreal sight of a bar full of British expats watching an episode of the old western series Bonanza on a big screen (“the projection of Michael Landon, who had no idea where he was”). This is cosmic American music, but one with a sense of distance and an international perspective.