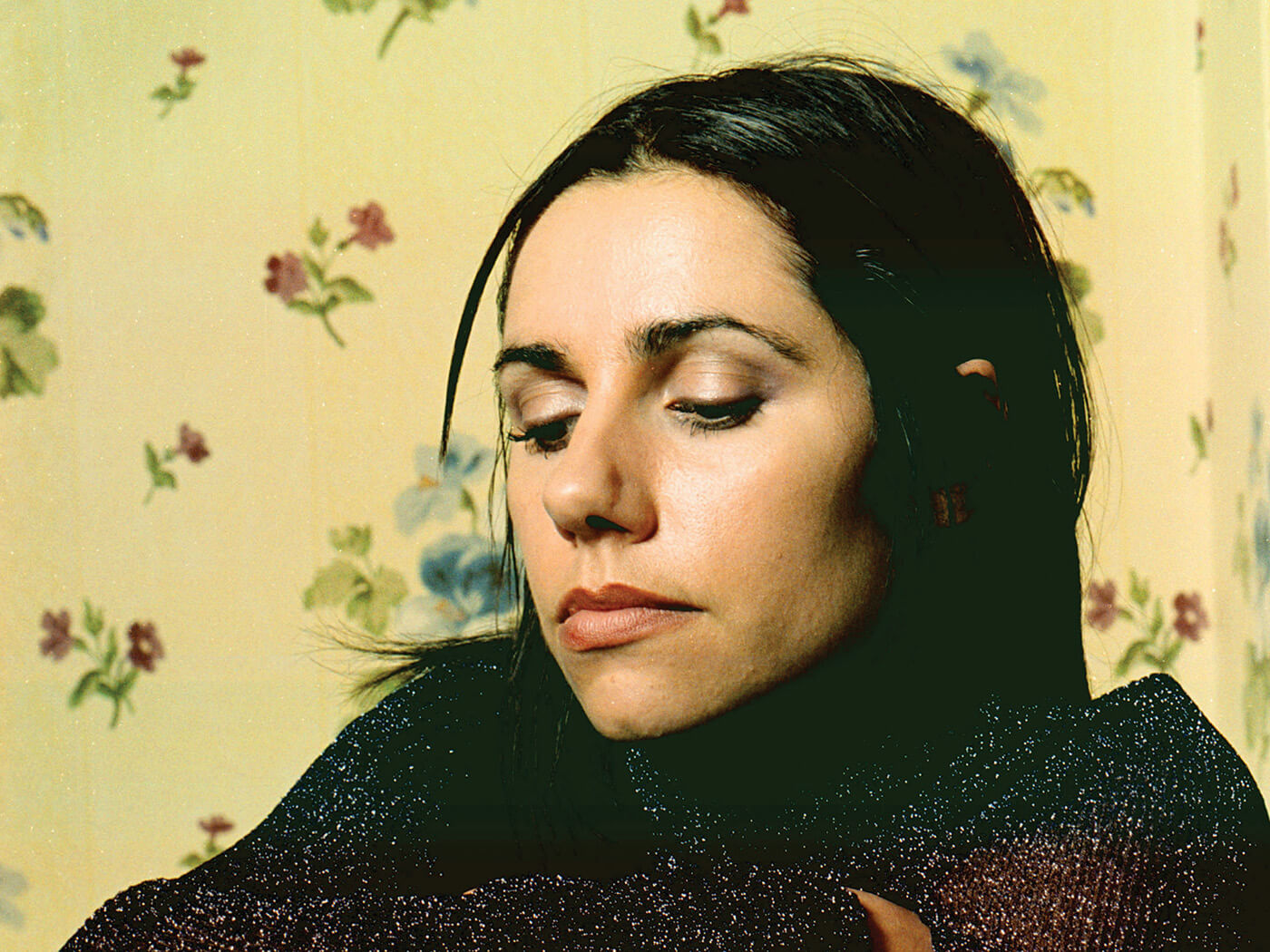 Let’s start at the end. The final track on this exhaustive trawl of the ditches and crossroads
of PJ Harvey’s oeuvre is “Red Right Hand”, the signature song of Harvey’s one-time collaborator Nick Cave. It is a song about devilry, written in blood; subsequently reshaped as the theme of the haircut gangster drama Peaky Blinders.

For Cave, “Red Right Hand” is a chance to embrace rock’n’roll at its most blood-raw. It is a tent-revival song in which fear and belief are locked in hideous quickstep. Since its subject is Hell and its declining suburbs, no performance of it can be too extreme. PJ Harvey, of course, is no stranger to shock and awe. Her early career was constructed from fragments of spit, feather and bone. But in Harvey’s “Red Right Hand” the horror comes wreathed in understatement. There is a tolling piano, a wailing harmony and abominable news delivered in a whisper. It is a lullaby performed by a siren, sung quietly because the children are already asleep.

It’s possible that Harvey would have taken “Red Right Hand” in a different direction if she had performed it a few years earlier. This 3CD or 6LP set shows how her career has been a matter of calibration. It caps a programme of reissues in which the demo versions of Harvey’s albums have been compared, often favourably, to the more polished official releases.

Steve Albini’s recording of Harvey’s second album, 1993’s Rid Of Me, has been the subject of much critical circumspection. Like (another controversial Albini production) Nirvana’s In Utero, it favours pain over relief, volume over restraint. And since Albini is a master of the choreography of headbanging, there is a kind of poetic power in his rhythm of drills. But it’s a tough workout.

How else could it have been? The first five tracks (four previously unreleased) present Harvey’s demos from Rid Of Me, recorded in Dorset in 1991–92. First, “Dry – Demo”. There is nothing wrong with the finished version, except perhaps that it allows Harvey to hide behind the electric fury of the guitar. It sounds like a dry run for Nirvana. The demo has a different flavour: the guitar still grindslike an argument conducted inside
a cement mixer, but the vocal is brighter. Albini focuses on the pain, while on the demo Harvey licks the bruise. Likewise, “Man-Size – Demo”. Harvey’s home recording is more primal, less concerned with sonic architecture. Albini does a thing with a drum and an off-kilter rhythm. The demo just burns. Albini’s “Missed” wears grunge fatigues and sounds like a steamroller landscaping a peace garden. The demo moans and weeps. Instead of submitting to rhythmic pugilism, the song’s sense of hurt emerges through the clatter. The voice remains similarly upfront on “Me-Jane – Demo”, which has the urgency of a busk in a warzone, delivering the song with heightened theatrics and breathless despair. It offers a prototype for The White Stripes, with Meg in charge. Only the demo of “Highway 61 Revisited” sounds weaker than the original album version, though that in itself was an experiment in playful irrelevance.

There are nine other unreleased tracks, of which “Why D’Ya Go To Cleveland” is the only entirely unheard thing. An offcut from the Dance Hall At Louse Point sessions with John Parish, it offers a clattering rearrangement of rock’n’roll cliche (a motor car, an American dreamboat, a dead-end love affair) and is more fun than it should be. The other unreleased demos bring the story up to date, but the differences in shading reflect Harvey’s evolving understanding of how her music should sound. On the sleeve of Uh Huh Her (2004), Harvey’s handwritten notes are instructive: turned up loud but playing gently; keep all noises, crashes, hiss and bangs; all that matters is my voice. Consequently, the demos from this period offer less contrast. “Cat On The Wall – Demo” is murkier, with a dash of melodica, “You Come Through – Demo ” has more restraint, “Uh Huh Her – Demo” is another memo for the attention of Jack White. “Evol – Demo” is not the most interesting song, but offers a brief primer in the sexual power of the electric guitar.

Not everything is unsalted. The B-sides and rarities – many from film soundtracks – allow Harvey to stretch herself into Brechtian oompah, Beefheartian discord, neo-folk. Some of these waifs and strays are excellent. “Losing Ground” from a Rainer Ptacek tribute (with Parish and Eric Drew Feldman) is a vital cacophony, and Harvey’s song for Jeff Buckley, “Memphis”, carries much emotional weight. “Guilty”, on which she invents Fontaines D.C., is more restrained in demo format; the demo of “I’ll Be Waiting” is grimier than the original. “Homo Sappy Blues” is a slight thing, playful, lyrically bleak. “The Age Of The Dollar” was recorded for the film A Dog Called Money but was shunted to the closing titles after John Parish told Harvey it sounded “like a jam in a pub”.

It’s quite a journey. By the end it’s clear that Harvey has learned how to turn the volume up by making less noise. Perhaps she always knew. One of the highlights is “Nina In Ecstasy 2”, a 1996 recording, released as a B-side in 1999. It’s a funereal fairytale, a hymn of innocence which segues into a chorus of “Where’s your mama gone?” from the multi-million-selling anthem of child abandonment, “Chirpy Chirpy Cheep Cheep”. It sounds both serene and alarming, because sometimes the most dangerous place in
the world is the Middle Of The Road.