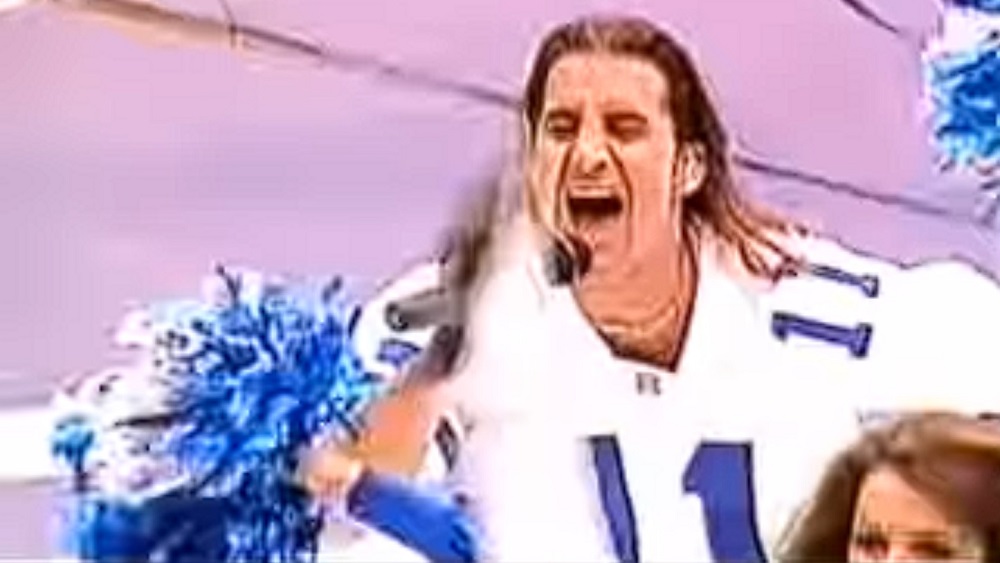 The early 2000s were a pretty fucked up time, when you think about it. Metal was in a crazy weird spot, terrorism hit U.S. soil, and everyone was on edge. So naturally, we were given the likes of Creed and Nickelback to become cultural anchors for a bit there. And while Nickelback is saving some face by admitting they were in on the joke the whole time, releasing new music, and saying weed is totally cool at their shows, Scott Stapp and Creed are nowhere to be found. In fact, they’ve kind of become a relic of a forgotten time.

Well, it’s time to go back in time and see what Creed was at the height of their success. Having blown up with songs like “Higher” and “One” and “My Sacrifice,” the ever-risk averse National Football League tasked the band with performing at that year’s Thanksgiving game with a medley of songs. What we got was what you’re about to witness down below: a lip-synced cringe-fest that’s not entirely their fault but is still absolutely hilarious to watch today.

I say it’s not entirely Creed’s fault because of how football games are produced. Typically, performers have to be on the field, do their thing, and get off in a matter of minutes. There’s no time for soundcheck and making sure everything’s plugged in for a live performance, so most times they just say screw it and run it with a pre-recorded track. This sort of thing feels less egregious for pop acts, but throw in the actually talented dudes of Creed and it’s just… oof.

Oh and what the fuck were those shirtless guys flying around on ribbons? What was the point and more importantly, what are they doing now?

Dark Below is Back With new Single
‘The Beatles Anthology’ Director Geoff Wonfor Dead at 73
Irene Cara, ‘Fame’ and ‘Flashdance… What a Feeling’ Singer, Dead at 63
Why Babymetal Will Have a ‘Silent Mosh Pit’ at Their Shows
Chinx Ft. Sizzla “On Purpose”