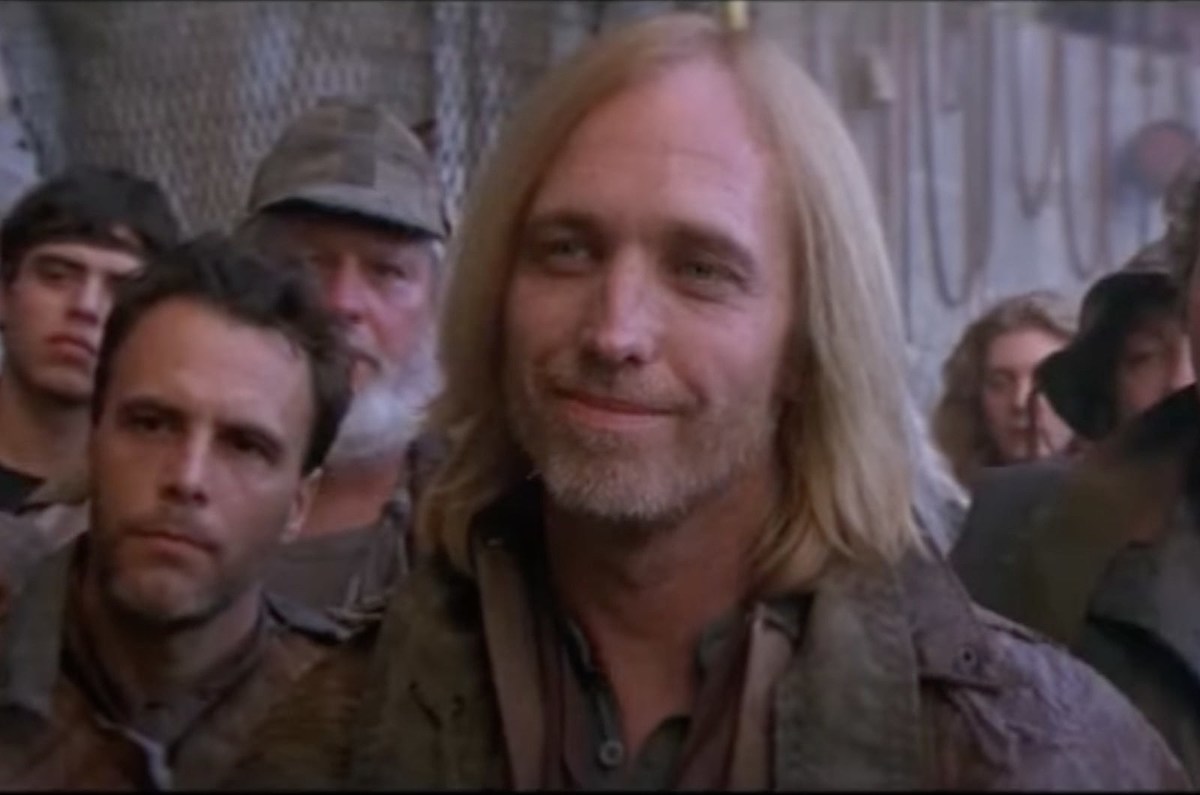 Tom Petty appeared on-screen for only a few moments in 1997’s The Postman, but it may have been just the experience he needed at the time.

Generally speaking, the ’90s found Petty navigating uncharted waters. His second solo album, 1994’s Wildflowers, was an instant classic yet life was not all it appeared to be. Heartbreakers drummer Stan Lynch, who’d been with the band for close to 20 years, quit the same year. Meanwhile, Petty’s marriage to his first wife ended in divorce in 1996, and he struggled with a heroin addiction.

Petty had worked on another film, 1996’s She’s the One, where he quickly composed the accompanying soundtrack and score. He then released an entire Heartbreakers album titled Songs and Music From ‘She’s the One.’ The film starring Jennifer Aniston and Cameron Diaz was poorly received. Petty’s album, which also included covers of songs by Lucinda Williams and Beck, was not: It reached No. 15 on the Billboard 200.

“I think people were drastically confused by the idea of a soundtrack album that wasn’t,” Petty told BAM in 1997. “I know the record company was. The film didn’t do well, but I liked it. It was funny and it had something to say.”

Petty then embarked on a 20-night residency in January 1997 at the Fillmore Ballroom in San Francisco, another adventurous project where the Heartbreakers let loose in a way they’d never quite done before. In addition to the hits, they played dozens upon dozens of cover songs and invited guests onstage to perform. “I wanted to play where there were no obligations at all,” Petty explained.

Obligations were, as Petty had learned over the years, part of the price one had to pay for being famous. Still, it would be inaccurate to describe Petty as disillusioned by fame in the ’90s. He hadn’t been all that keen on it in the first place.

“It’s never been in my nature to want to be like a personality or a big celebrity,” he said. “It’s fine if you do; I have nothing against it. It’s just not in my nature. I would be put off by that. I don’t attend premieres — I actually shy away from things that are gonna put you in that limelight. … We don’t do photo shoots at all. I just don’t do them. I don’t want to do them. It’s fine when you’re a boy, but now I feel ridiculous sitting in front of a backdrop and getting all painted up. So, if they wanna get a picture of me, get me at work or get me on the go, but I’m not gonna do that. The last one I did made me sick; I think I actually got the flu.”

Watch the Trailer for ‘The Postman’

By the latter half of the ’90s, Petty and the Heartbreakers had conquered just about all there was in the world of rock ‘n’ roll music, garnering both commercial success and critical acclaim. But that didn’t exactly equate to total satisfaction in Petty’s mind.

That’s when he got a call from Kevin Costner, then at work on a film he would produce and direct himself titled The Postman. Based on the mid-’80s novel of the same name, his movie takes place in a post-apocalyptic neo-Western world during the then near-future year of 2013. Costner was to portray a title character who travels the U.S. delivering old mail to citizens, unwittingly inspiring hope.

Costner’s call also happened to inspire some hope in Petty, who took on a small but memorable role as a local politician. “Kevin called me up and asked me to play the mayor of a post-apocalyptic city, and it was at a time when I really needed to do something,” Petty told Rolling Stone in 1999. ”I was, like, lost. The band had stopped touring. I lived alone.

“I needed to do something with my time,” Petty added, “and this sounded perfect, so I took off and went up to Washington, in the middle of the woods somewhere, bald eagles going over and freezing cold in July.”

He was familiar with being on set in front of a camera. Petty had been doing it for years with his own music videos, a task he simultaneously enjoyed and found to be another drawback to fame. ”We were around in the days before videos and it was much nicer, because people made their own films to songs in their head,” he told BAM. “They discovered you in a different way: on the stage. I’m not trying to be a purist. I’ve enjoyed making videos and I love film and I love the whole process, but it’s just a pain in the ass to have to [have] one for every release.”

Petty’s Postman character even bore an eerie resemblance to the post-apocalyptic drifter he’d portrayed in his music video for 1982’s “You Got Lucky,” but working on a feature-length Hollywood film was still new. “Kevin was the director, and he really got on my case about how to do it — ‘We do this different than you do music,'” Petty told Rolling Stone. “I’m grateful to Kevin. He taught me, or tried to, a lot of things about how to get this or that across on camera.”

Watch Tom Petty in ‘The Postman’

In Petty’s cameo, the Postman encounters the mayor while seeking sustenance. ”I know you,” Costner’s character says to Petty. “You’re famous.” The mayor casually replies: “I was once, sort of – kind of, not anymore.” Later, he insists that the Postman is actually the famous one.

Released on Christmas Day in 1997, The Postman was an epic failure at the box office, returning only a fraction of its $80 million budget. Critics harshly condemned the film, and it won five Razzie Awards for Worst Actor, Picture, Song (for the film’s entire musical selection), Director and Screenplay.

Costner would go on to defend the film in subsequent years, while expressing gratitude for having made it. Petty’s lines in particular, he later said, were meant to serve as a broader metaphor.

“It deals with the nature of fame, you know what I mean? It’s a very subtle thing,” Costner told The Daily Beast in 2020. “I think The Postman actually is kind of a very funny movie, when you watch it. There’s humor wrapped all the way through it. Just dealing a little bit with the nature of fame, and dealing with somebody who’s famous, and him saying, ‘No, you’re famous.’ That’s all the movie was trying to do.”

Not long after the movie was released, Petty received treatment for his addiction struggles, achieving sobriety in time for a tour supporting his 1999 album, Echo, and then married again in 2001. He went on to land a few more roles in film and television, most notably voicing Elroy “Lucky” Kleinschmidt in King of the Hill from 2004 until the show’s end in 2009.

Fame, then, didn’t seem so daunting. Petty and his second wife, Dana “can have peaceful times when it is not a factor in our lives,” he said in the 2005 book Conversations With Tom Petty. “Really, most of the time it’s like a normal family. I’m working, and we’re raising a 12-year-old kid. It’s not unusual spending a large part of the evening trying to help [Petty’s stepson] Dylan finish his homework. I’ve just got an unusual job.”

Odds-and-ends projects are often overlooked but in time some of them have come to be valued – and in some cases, essential – parts of these artists’ catalogs.