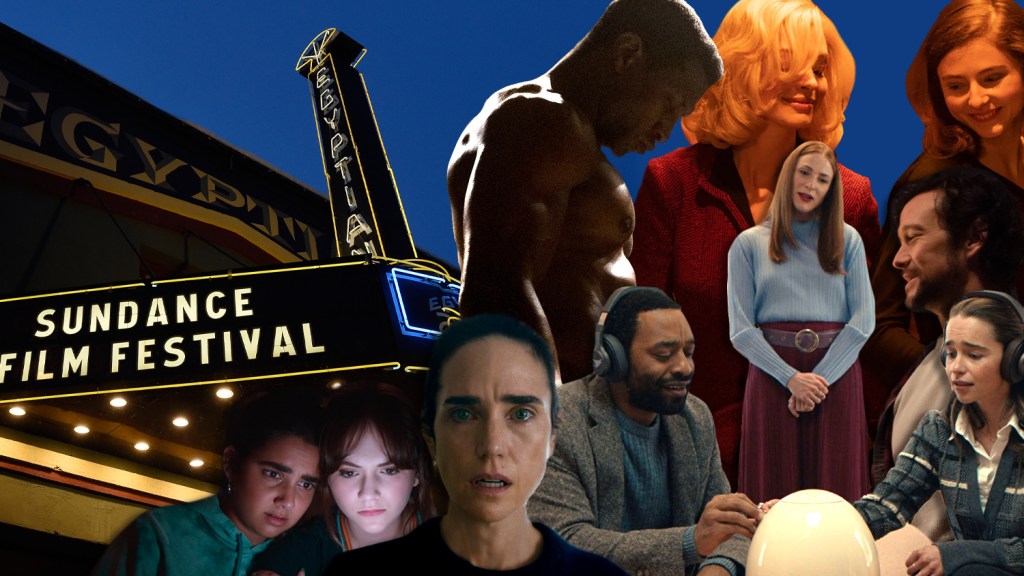 The Sundance Film Festival returns in-person beginning Thursday after being sidelined by Covid for two editions, and three years of struggle to climb out of an abyss. The indies have emerged from a time warp into a strange new place, one that’s still evolving.

Deals are expected to bubble slowly this edition with a few potential eruptions; don’t be surprised if a number of deals get announced after the festival. Overall, buyers are circumspect, with spending constraints and product in the pipeline already. And much of the Sundance mystique lies in the search for hidden gems layered around marquee titles.

Among the Park City Main Street community on opening day, it felt like a tamer environment than previous Sundances. By this point in time, the street is typically decked out with festival banners galore, movie posters splashed near crosswalks and storefronts tricked out as sponsored lounges. Only the Chase Sapphire lounge and Deadline sister brands Variety and Indiewire were so emblazoned.

“Back-in-person Sundance — it’s the most important domestic festival and it’s the first of the year,” said IFC Films president Arianna Bocco, who like many industry execs is stoked to be returning to the vibrant Park City moviegoing environment. The festival “will be an interesting barometer of where we are in the marketplace whether positive or negative.”

Themes this year: Streamers, which emerged as dominant buyers of niche movies pre-pandemic, may buy less, and are also strong purveyors of indie titles as Covid eases. The uncertain state of the indie box office has everyone questioning the types of movies that can leg out on the big screen (hint: make sure the theme isn’t too dark). Will cost cuts making headlines across media and entertainment depress dealmaking? Could a possible writers strike rev it up?

“It should be an interesting year at Sundance. I think a lot of distributors are very curious to see what the appetite will be from streamers, and how that translates into the traditionally buzzy deals,” said Kyle Greenberg, head of marketing and distribution at Utopia.

“You’ve got great films in the marketplace,” he said. But “the streaming landscape continues to evolve very quickly, and I think that means that there can be some difficulty finding a path to profitability on projects that may have been obvious pickups as recently as Sundance two or three years ago.”

That said, “hopefully it levels the playing field and lets indie distributors come in on projects they might not have had access to.”

Industry emotion at this in-person Sundance ranges from exuberance to cautious optimism from buyers, particularly after a Toronto Film Festival that saw one big, major deal: Focus Features scooping up Alexander Payne’s The Holdovers for $30 million, sold in a private screening outside the fest’s lineup.

One seller predicts “an overall slower market” with “overnight sales situations fewer and farther in between.”

One streamer insider tells us that this year’s lineup of largely arthouse titles has them prioritizing about half of the 10 they’d typically make time for at previous Sundances. Others sources tell us distributors such as A24 and Focus Features have enough product in their annual slates and aren’t necessarily eager to buy given the wonkiness of the specialty box office — despite sending their buying corps into the snow.

Not to mention, it’s been a year of retrenchment with cost cuts, layoffs and stock woes among big media that’s bound to pressure all buyers at the festival. No one ever wants to make a bad buy, but particularly not now.

However: once buyers settle in at Park City’s high school Eccles Theatre and hear that audience roar, cynicism can melt away as buyers encounter a surprise, the unexpected, a potential Oscar contender, a fresh voice in cinema, all triggering mad bidding wars.

Priming the pump for an auction this year is the fact that many sellers have insisted their movies not screen in advance to the press, and that both buyers and critics relish a pic’s aura in the room.

One attractive quality among several Sundance titles up for grabs this year: many of them clock at under two hours, including Thursday’s star-studded opening-night titles, Rachel Lambert’s Sometimes I Think About Dying starring Daisy Ridley (91 minutes) and Sophie Barthes’ The Pod Generation starring Emilia Clarke and Chiwetel Ejiofor (109 minutes). One factor that’s hindered business for arthouse movies this past year has been lengthy running times, with awards contender Tàr (2 hours, 38 minutes) and Cannes Palme d’Or winner Triangle of Sadness (2 hours, 27 minutes) among the examples.

With that said, all that’s needed for an auction is two motivated buyers, notes one indie distribution exec. “If there’s something they want, they will go for it,” he said of the big streamers. “But it’s not a feeding frenzy.”

Still, at Sundance, frosh directors are a screening room away from career liftoff. While the fest is known for launching Steven Soderbergh and David O. Russell, alums in recent years abound including Ryan Coogler (Fruitvale Station), Damien Chazelle (Whiplash), Taylor Sheridan (Wind River), Dee Rees (Pariah) and Sian Heder, whose CODA sold to Apple for $25 million in 2021 when the fest was virtual; that pic ultimately won Best Picture at the Oscars last year.

“It’s a festival of discovery. It’s a great festival to see movies with other people. To discover movies that you didn’t know anything about before seeing them,” said Erik Feig of Picturestart. He scored the biggest deal of last year’s festival, selling Cha Cha Real Smooth to Apple for $15M. This year, he’s bringing Molly Gordon and Nick Lieberman’s Theater Camp in competition along with its worldwide distribution rights.

This year, also look for frosh distributors such as Robert Schwartzman’s Utopia and Mubi (where former Amazon Studios vet Jason Ropell is chief content officer) to step up. The latter acquired North America, UK/Ireland, India and Turkey on Park Chan-wook’s Decision to Leave ahead of Cannes last year. The title is South Korea’s entry for this year’s Oscars.

Among streamers, Apple remains the alpha, able to snatch any title off the table. The question is whether or not filmmakers want a full-windowed theatrical release. Streamers are able to plunk down a ton of cash as their fare doesn’t carry the big P&A costs of theatrical releases.

As for Amazon, after a $41M buying spree in 2019 soon after Jen Salke arrived as head of the studio, the e-commerce behemoth largely pulled back on subsequent fest pickups after getting burned at the box office by such titles as Mindy Kaling’s Late Night ($15.5M) and Brittany Runs a Marathon ($7.1M domestic).

The question this year is, with MGM in the fold, how much does Amazon need? Between the streamer and the lion theatrical label, it currently counts at least 13 titles slated for 2023. Amazon’s revived superpower as it returns to Park City? It can buy for Prime Video or for MGM theatrical. Last year, Amazon and Blumhouse picked up genre title The Nanny for $7M from first-time feature writer-director Nikyatu Jusu. In the Premieres section alone, Amazon arrives to the festival with Cassandro, about gay wrestler Saúl Armendáriz, aka the “Liberace of Lucha Libre”; MGM’s Tiffany Haddish movie Landscape with Invisible Hand; and the documentary Judy Blume Forever.

With Netflix, sources, including company insiders, have said the streamer of late mostly debuts titles at Sundance, versus making opulent acquisitions — read, its big-time $12.5M acquisition Mudbound in 2017. This year, the service run by Reed Hastings and Ted Sarandos is premiering the documentary Victim/Suspect, which follows investigative journalist Rae de Leon who uncovers a shocking pattern of young women who’ve reported their sexual assault to the cops, only to be charged with making a false report.

Festgoers, just getting their arms around the 100-plus Sundance slate (20% of these titles already having distribution), say there’s mainly a sense that after years of experimentation and gulping up product to stock their services, streamers have matured.

“It’s not like they are brand new, on the market for the first time. They are educated as buyers. They have been at it for a while. They know who their audiences are, they know their subscribers. They have a better handle of what works on their platform and what doesn’t,” said one industry executive. “Also, they’ve beefed up their own internal production divisions so there isn’t that desperate need to fill the shelves. They can be much more targeted, shopping for what they need, what they want.”

Among theatrical distributors potentially returning to form is Searchlight. Last year it acquired the Emma Thompson movie Good Luck to You, Leo Grande for $7.5M, which made an immediate beeline for Hulu. Part of that had to do with Searchlight still having an HBO pay-1 deal, hence it couldn’t offer theatrical on the movie, according to industry sources. The notion is that if Searchlight buys this year, they’ll pick up for a theatrical window plus PVOD and Hulu ancillaries. Searchlight is coming to Sundance with the romantic drama Rye Lane from Raine Allen Miller in the Premieres section.

Theatrical is better but still shaky after cycles of disruption. It’s just hard to pry some audiences off the couch. The theatrical business showed a pulse beyond franchise IP this past MLK weekend as older audiences found their way to the Tom Hanks drama A Man Called Otto, which overperformed with $15.4M in its wide expansion. However, that’s a $50M movie with a major studio marketing spend. When it comes to movies from smaller distributors, success will continue to be redefined even as the marketplace rebounds.

At the very least, producers and traditional distributors have “more tools in their toolkit — different windows, different rights, different terms offered to a financier they wouldn’t have been able to offer a few years ago,” said one exec. It’s not equal footing exactly – streamers can’t be matched in terms of upfront fees. But there’s a lot more optionality on approaching deals.

The phenomenal success of A24’s Everything Everywhere All at Once as that distributor’s highest-grossing movie ever at $70M domestic, $104M global provided a lot of optimism for the specialty sector. However, not many imitators of edgy, fun arthouse fare have followed. A takeaway lesson as to what may work indie-wise at the box office? Stoke the 18-34 crowd, who showed up at close to 70% during that pic’s wide expansio).

“Younger audiences are engaged, and they want to see new and fresh and different and are willing to come out for it,” says Bocco. Kyle Edward Ball’s debut horror Skinamarink — with a budget of $15,000 — grossed $895,000 over the four-day holiday last weekend for IFC at 692 theaters.

Bocco is optimistic on theatrical but thinks it needs to be “re-calibrated.”

“As generations get older and culture changes, what people want to see changes. We can’t expect that it will remain the same,” she said. “It’s kind of exciting to figure that out. It’s clearly a transitional market.”