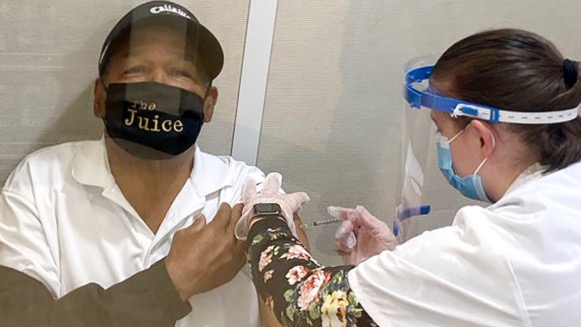 O.J. Simpson is many things, but he is not an anti-vaxxer. The former NFL star-turned-accused murderer received his coronavirus vaccine on Friday.

Simpson, who was previously seen partying without a mask, got his shot in Las Vegas on Friday. He was photographed wearing a mask that said, “The Juice” (of course), which he subsequently posted to Twitter. In an accompanying caption, Simpson wrote, “Get your shot. I got mine!!!”

Simpson’s lawyer told the New York Post that his client was eligible to receive the vaccine due to his advanced age (he’s 73). “If you’re 70-plus, you’re eligible for the shot — you can schedule your shot and they’ll do it,” Malcolm P. LaVergne said. “There’s no favoritism with him being a celebrity — that has nothing to do with his getting the shot.”

As for why Simpson felt the need to tweet about his vaccination, LaVergne explained, “He has a pretty substantial Twitter following — this is him telling everyone, trying to motivate people, to get their shot. He’s getting his shot at the earliest possible opportunity and he’s urging everyone as a matter of public service to please get yours, too.”

In other news, Nicole Brown Simpson and Ron Goldman did not receive their coronavirus vaccines, because they are dead.

Get your shot. I got mine!!! pic.twitter.com/hP1rDq5L7c