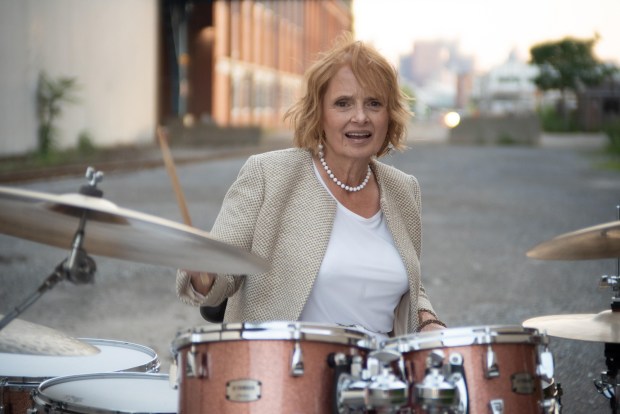 The art of rock ’n’ roll is more than alive and well and that’s thanks to Tedi Brunetti, also appropriately known as the Queen of Pittsburgh. I hadn’t heard much from her before this album, but upon researching her seasoned past tied to the New York City music scene, I came to realize she did some quality work in the city, even opening for the iconic rock band The Clash! Her well-deserved and much-needed time spent in the rock scene was dually tied to the fact that she had a great voice to offer as well as primo drumming chops.

After starting a family and cutting ties with the rockstar lifestyle )partially due to her sobriety), Brunetti took a decades-long gap between rock projects, focusing on her personal life and professional career. Lucky for us, she has finally decided to return with the help of star producer Dean Sargent (known for his production work with Blue Oyster Cult) and Michael Henegan, releasing the aptly-titled The Queen of Pittsburgh to stake her claim in the modern music industry. Long story short, it’s obvious she’s back with a music-making vengeance from the high bar she sets with the record, but more than anything Tedi Brunetti is back to remind folks how much heart has been lacking from modern popular rock music.

With every song released under Tedi Brunetti for The Queen of Pittsburgh, it’s evident she has more passion and joy in regards to crafting original songs than most groups you will come across working today. For a fun and sexy love track, look no further than the bluntly titled “Seduce You.” It marks the halfway point on the album and helps listeners settle into the exact mood needed for the back half of the project, but even the preceding tracks do a great deal at setting the stage for the number of clever lyrics and lush production the rock album contains.

Other remarkable songs worth pointing out include the title track, which will almost certainly see release as a single in the future as it hones in on everything about Brunetti’s sound that feels simultaneously familiar and new, and the first single of the album “Evil Woman.” Listeners will probably gravitate to “Evil Woman” in particular due to its earworm sensibilities, with its catchy chorus and slower tempo coming to a head so early in the album’s tracklist it’ll certainly take listeners by surprise. The Queen of Pittsburgh never peaks early, though, as each song feels like its own crucially whole piece of a larger puzzle; Brunetti has paid attention to what makes an album great, and she’s taken the lessons learned in her long-lasting career in music to heart.

There’s no certainty that the throne for Queen of Pittsburgh will ever be rivaled, and we should all rest assured that if an opponent arrives, the fight will certainly be one hell of a show; until then, however, it’s clear as day that Tedi Brunetti is the one, true Queen of Pittsburgh and we’re all extremely lucky to live within her rocking, melodic kingdom.