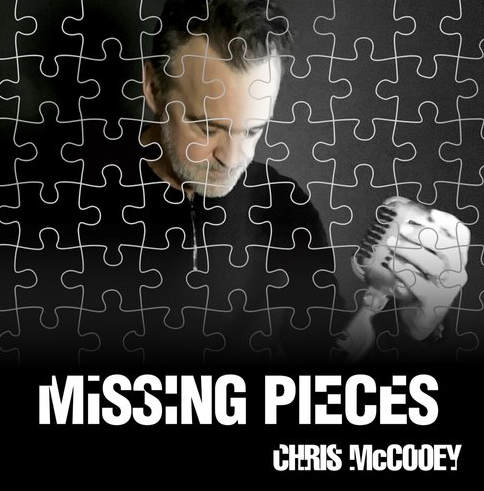 With lyrics frequently as stormy as the tone of the music behind them, it should be obvious from the jump that eccentricities are a big part of the new album from the mind of Chris McCooey, Missing Pieces. What isn’t initially made clear to us in the record’s instrumental construct and foundational verses is just how endearing a substance these eclectic compositional whims will yield, from this juggernaut of an indie pop/rock single to the more hesitant stomp of “Just Like You” and swinging “Raise the Roof.”

The refined musicianship of a mid-career Beatles record is all over the material in Missing Pieces, but it’s coupled with such a rejectionist point of view when it comes to the flagrant simplicities of modern pop that one can’t help but wonder what strange – and wholly melodic – treasure waits around the next corner. My gut told me I was in for something off-center in this highly-anticipated new album, but to say I was taken aback by the abstract charisma in this piece wouldn’t be doing my experience justice.

A freeform “So Complicated” trips into the synthetic orchestral intermission in “Well Well” seamlessly on shuffle, while the crunch of “Home to Me” ascends from the silence much in the same style the title cut did at the start of the tracklist. To be quite truthful, I don’t think it matters how McCooey starts up these songs; quiet or loud the same, they would all evolve into a beastly shape of some sort by the time we hit the thirty-second mark in any given track.

“Well Well” is the more multilayered of the single-worthy tunes in Missing Pieces, and its signature harmony could find a most comfortable place anywhere on college radio this winter. The same could probably be said for the surprisingly agile “Bigger Than the Both of Us” were it not molded as the perfect deep cut in this LP, which from one end to the other has the feel of an antique alternative rock effort and not that of a scattered indie experiment.

“Bigger Than the Both of Us” gets bluesy and blunt inside two minutes, and despite “Home to Me” running a modest running time for the kind of composition it is, the latter track sounds almost twice as big and brawny as the former does. Missing Pieces concludes with an almost ghostly piece in “On My Way Back Home” that fades ever so softly into the darkness through which McCooey came bursting out six tracks prior, but when it’s over the ache of the musicality is topped-off sets in like a fast-acting pot brownie.

Chris McCooey doesn’t simply give us the unfiltered look at his artistry we’ve been craving here but unfolds layer after layer of himself all in the name of better understanding his aesthetics as they stand without any kind of fanciful synthetics behind him. I found Missing Pieces to be a record worthy of lusting after, and if you’re an American indie rock buff you’ll probably feel the same.