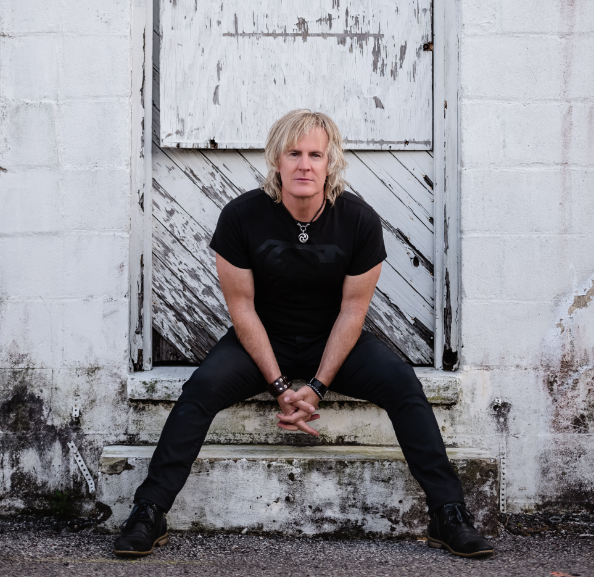 The amazing thing about Jeff Coffey is that with his voice he can sculpt any song into a momentous, hit-making experience. Be it ballad or a full-court press pop rock song, Coffey brings a distinct harmony to every note. In the triumphant album This Time Around Coffey once again proves time and time again his voice is electric and something special. He’s also a generous storyteller – a natural front man.

In other words, these songs go over the top because of the Coffey factor. The story of me and you, Coffey sings in the opening track, “Black and Blue”. It’s the perfect out-of-the-gate song to get the listener ready for what’s to come. Coffey’s core sound is a mixture of Journey (lots of parallels to Steve Perry honestly), Dennis DeYoung (formerly of Styx), The Storm, even the early nineties rockers, Matthew and Gunnar Nelson (NELSON). If you’re a fan of Jim Peterik (The Ides of March, Survivor, and songwriter for .38 Special and more) and Brian Howe (Bad Company) then this is also right up your alley. It’s already a perfect blend of folk-pop (think the Hollies versus the blues rock we grew accustomed to in the early 90s).

Feels so good to call you mine, he sings in the Americana/pop country flavored “All I Need Is Love”. I don’t need a bottle to chase the clouds away, I’m not asking for much, all I need is love, he sings. Already into the second track and his crooner skills are highlighted by romanticism in his lyrics. He’s not a one story guy, though. In the next track, “Someday” he bites into, what I think, is the general unrest of the world that we’ve experienced so much of in 2020 and now into 2021. Someday we’ll find we’re all the same, he sings. He has a strong mix of bravado, and modesty in his voice. He’s not singing from a place of arrogance in this song.

This record is full of displays of Coffey’s vocal prowess. It’s no wonder he at one time was the lead singer of the legendary band Chicago. He’s also currently touring with former Eagles’ guitarist Don Felder. Coffey’s innate sense of rock and roll and timing is incredible. He proves it again in the excellent “Careful What You Wish For” and Far Away”. In both instances, he gives the listener so much, with grace and complete control of the song. He sets you at ease all the while he’s entertaining you and constantly connecting on a higher emotional level. Songs like the ones on This Time Around remind listeners that music is organic and from that live band and full band experience, a beautiful, magical thing happens. That not only never gets old, but it also can’t be replicated with a computer or ProTools. This is real talent. Coffey is as vibrant of a rock/pop singer as you can listen to. He’s just what the world needs for a soundtrack to take us into the next year.