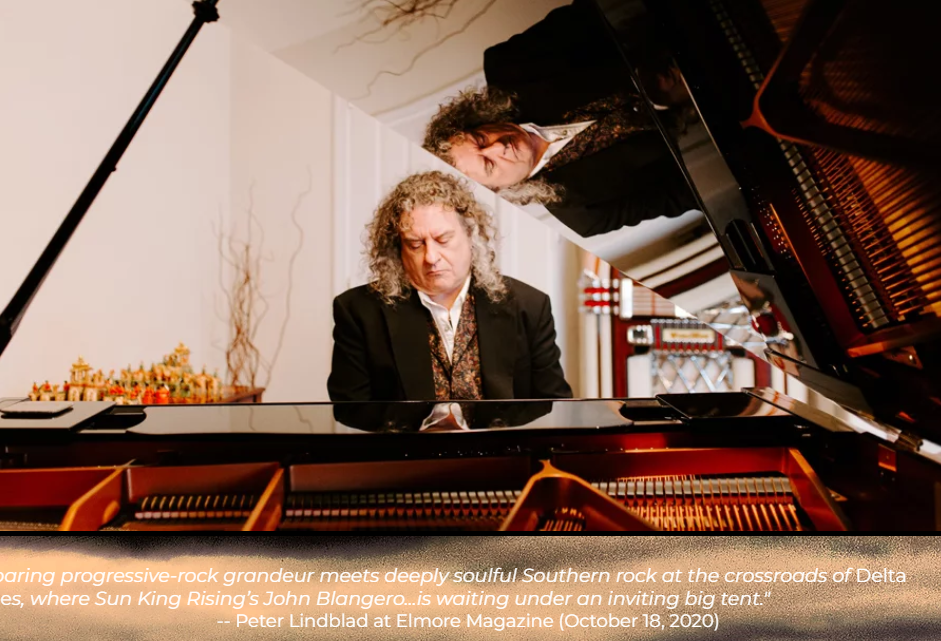 Delta Tales is a ten song studio release from Sun King Rising, the one-man project helmed by singer/songwriter and multi-instrumentalist John Blangero. The collection falls within several stylistic wheelhouses but the predominant style heard throughout the release is reminiscent of big screen substantive pop songs with assertive drumming and a rock guitar edge. Music has evolved into hundreds of myriad styles/forms and our listening choices are more diverse than ever before but the six string electric guitar remains a first-rate vehicle for conveying both melody and emotion.

It is far from reliant on its capabilities. Piano and keyboards, if anything, are Delta Tales’ lead instruments and you can sense Blangero’s hand steering the song through his work on the keys. He ably captains the musical ship through album opener “The Snake”, adding delicious vamps along the way, weaving in and out of the other instrumentation. It’s a cover of an obscure R&B track from the 1960’s but Blangero and the other musicians bring it to vivid modern life. The lyrics neatly dovetail into the themes he’s taking on during this release.

Sin and redemption are eternal themes, set them in the American South or Main Street anywhere and they still resonate, but Blangero understands the steamy allure the region exudes for many listeners. Sun King Rising refer to the album’s second track “Milkweed and Thistle” as a soulful Southern rocker and, while it does have much more of pronounced push than earlier songs, the comparison falls short. The song is much more in the mold of a sleek and punchy rock track for the AOR crowd that, nonetheless, contains genuine substance and depth. Blangero incorporates the backing vocals into the song with excellent results, once again, and the cut takes particular flight during its second half.

“Free Will in China Blue” has vibrant horns and slinking rhythms capable of ensnaring listeners but the vocals is its crowning touch. Blangero skillfully doubles the song’s rhythms with his own well-timed phrasing further layering the lyrics. The slightly churning tempo adopted for this track gives it just the right amount of pacing; he’s right to highlight this song, pairing it in a single release with “Milkweed and Thistle” initially before opting to include it on the album.

“Evangeline in the Morning” is another high point during the album. It’s a pure ballad but rather taking the naked, unvarnished route some might expect, Sun King Rising opts for dressing the cut up in resplendent supporting vocals and hypnotic, swaying piano lines. The lyrics, as well, are among the finest on Delta Tales and underline the storytelling attributes key to his songwriting success. He invests every ounce of his available attention and passion into conveying the song’s contents.

Another of the cinematic jewels making Delta Tunes shine is “Drive Me to Nashville”. It’s a song ripped from the realities of a musician’s life but goes further. The music and Blangero’s voice alike inhabit a specific landscape quite like any other though references to Texas locales obviously ground listeners in some sort of temporal reality. He delivers, likewise, one of the album’s more soulful vocals and the backing singers give the performance additional weight.

Sun King Rising scores in a big way with this album and admirers of Delta Tales will look forward to a future burning with promise.