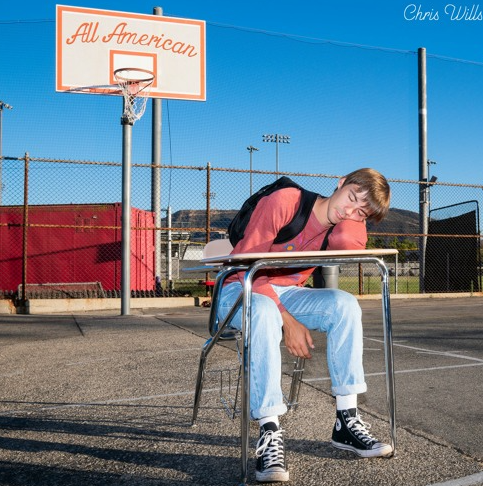 Los Angeles’ Chris Wills proves he’s prime time ready with the sparkplug “All American”. Bursting with energy and a catchy chorus that doesn’t lose its grip, “All American” is the pop rock track we’ve been patiently awaiting for all of 2021. Inspired by a dream that will never die, “All American” roots itself even further with tight guitar work and the bounce of the drum. Getting into this rhythm is just as easy – “All American” is further proof that real artistry never dies and it’s always worth fighting for. This song signals freedom and letting go – it’s the soundtrack to living in the moment.

When Wills sings I’m down forever with you, it made me want to thrust my fist in the air. This song has such a rock club vibe, a gathering storm of sorts happening. It ignores the pitfalls and tragedies of young love or high school and throws caution to the wind. It’s forgetting that there’s homework and the only thing that is stressing you out more than getting a date to the dance, is asking your parents to borrow the car. Rock and roll is about freedom and you can hear that between the guitar riffs, and the pesky percussion this song conveys. This is also the perfect song to play with your windows down and cruising down the highway to make something of your Friday night.

“All American” brings to the crowded music scene a newness. It’s invigorating to hear a, dare I say it, up-and-comer have such a great first outing. Wills, who mentions in his press materials, wrote the song during the pandemic after sitting in his car outside a subway station in North Hollywood. He said it’s about a late friend, and the dreams they shared. It came to him within minutes. Great songs can do that – it just comes to the artist and flows. As a listener, besides the feeling that you’ve said lines like I guess I’ll never be free of you in your own mind a million time, be it a romantic love or some sort of addiction, you get glued to Wills’ voice because he’s got that it factor. He’s beguiling. We all dream – some of us just do a better job of converting that dream to reality. I think “All American” is universal because we’re all looking at life from the outside and never really on the inside. No one is. When he pulls in some backing vocals – ever so faintly – it’s like that voice in your head that tells you to keep going, keep striving. We all need a cheering section, right? I think it also sounds youthful and hopeful.