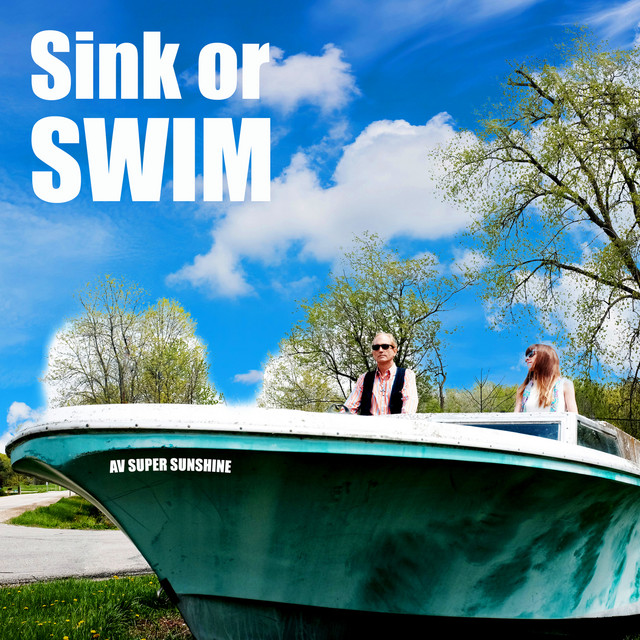 If diversity of discography is one of the great points of judgment in all of indie music, AV Super Sunshine is far ahead of his peers. He’s recorded a bevy of different genres and compositional concepts through the years, and in his new single “Sink or Swim,” he’s giving us some of the most straightforward pop/rock he’s ever stamped his name on. While there’s something rather plaintive about the style he’s utilizing in this performance that could be its greatest charm – this is frills-free, to-the-point pop/rock that doesn’t need an epic explanation ahead of listening to its beat.

The drums here are not the main element driving the dance mix of “Sink or Swim,” but instead a collective force from the music that isn’t centered in the percussion at all. If anything, I think there’s a lot more movement coming out of the melodic intricacies in this mix than there is the drums, which isn’t to say that the percussive entity in the background doesn’t hold up its own weight. AV doesn’t want this to sound like just another club remix, and if he did, he wouldn’t be putting the kind of detail that he is into the final product.

There’s a heady poetic feel to these lyrics that debatably runs a little deeper than the standard AV Super Sunshine has set for his music in the past, and I think part of this is because of how much he has matured as a songwriter just in the last couple of years alone. He’s got a better sense of what he wants to say in a song and the sort of mood he has to cultivate for us to get there, and if this is a fair depiction of where he’s at right now, it’s undeniably his most mainstream-ready thus far.

Per the norm for AV, “Sink or Swim” has a very sophisticated production quality, but it doesn’t feature a performer intent on overreaching in the name of creative ambitiousness at all. There’s polish on the instrumentation, but the standard version of this single is a lot more hands-off in terms of construction than what some of this player’s peers would have gone with, especially given all of the interest in surreal and atmospheric harmonies in the past few years. You don’t need to fix what isn’t broken, and that’s one of the technical themes of this piece for sure.

I’m never quite sure what kind of magic AV Super Sunshine is going to submit next, but you can rest assured that “Sink or Swim” isn’t lacking in any of the panache that has made his moniker famous in all the right circles in recent times. He’s eclectic, eccentric, and in love with the notion of making music that no one else is conceptualizing at the moment, which is a lot more than I can say for the bulk of creatives trying to make a name for themselves around the underground right now. As it stands, “Sink or Swim” is another highlight in a series of great moments for this artist’s exciting and constantly growing career.