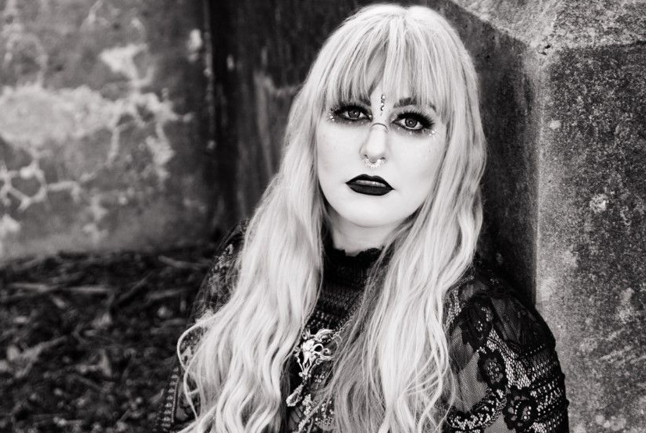 Iva Toric’s new single “Trust Fall” is the third single release from her second album Dead Reckoning. The San Francisco based singer/songwriter made her first big splash on the scene with 2020’s dark gem The Devil’s Mark, a collection serving notice that a new female singer in the metal world had emerged. She doesn’t follow in the footsteps and template of her contemporaries, however, as Toric generally eschews the genre’s imaginative trappings in favor of much more confessional-oriented fare.

Little else reflects that as much as writing about exit strategies and emotions leaving a relationship turned dark. Toric writes about this cruel and all too common twist of romantic fate from the point of view of an insider, someone who has lived this rather than imagining it for listeners, and it gives the cut intimacy and immediacy in spades. Her credibility and the song’s is beyond question. You hear her throwing every ounce of herself into the track and never doubt her from the first line onward.

She is also negotiating and orchestrating her presence as well. Toric commits herself to all the right lines and syllables, but she never presses too hard and pulls this song from raw emotion into melodramatic overkill. Straddling the line between a studied and over the top performance is a much more difficult tightrope than you may even think, but Toric makes it sound easy. It is what the great ones do and the offhanded skill they exhibit keeps us coming back for more.

Gregg Cash handles the song’s guitar and bass playing as well as the arranging. It is quite a load, but it pays off with a performance that never seems like it is at a loss for invoking a compelling instrumental texture or reinforcing the vocal in some significant way. Dylan Howard supplies the final piece of the musical puzzle with a powerful array of beats and rhythmic shifts that fuel the song with energy. There is plenty here to engage listeners both emotionally and physically.

I believe translating the song to live performance wouldn’t be difficult. The dynamics of the track are designed in such a way that it holds seemingly boundless promise as a live song and the chorus, in particular, presents a particular memorable opportunity for Toric to blow live audiences away. She is only on her second album with Dead Reckoning, but it is impressive how she has marshaled her strengths with such seeming effortlessness.

What a trajectory in just two years. Three singles in and you can mark Dead Reckoning, in my book, as a success already and scarcely shot out from the starting blocks. It’s only going to get bigger from this point onward. This is a moment when Toric’s career likely ascends to a higher level than before and listeners present for this moment are likely to be fans for life of this talented performer and songwriter. She’s well on her way to something special and continues blazing an uncompromising trail to get there.