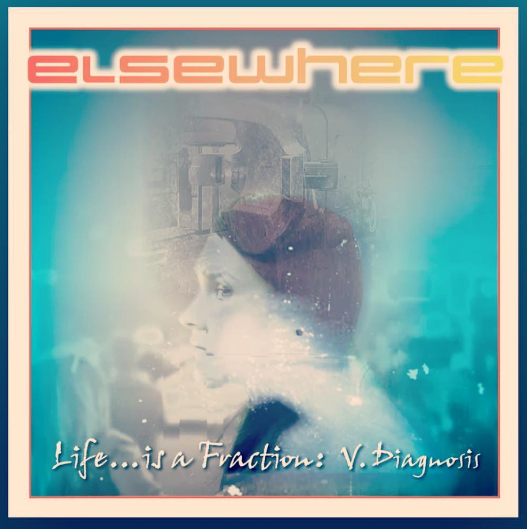 Michael Aroian, Adam Soucy, and Kevin Swaluk have been writing and playing music for some time now under the banner Elsewhere with great success. It’s obvious, however, they wanted more. The band’s latest album “Life… is a Fraction”  is nothing less than a massive swing for the artistic fences, the long bomb for the end zone that Aroian and his cohorts intend to stand as a lasting monument to their abilities.

It’s a concept album. This alone sets it apart. Elsewhere don’t really approach their storytelling obligations in a linear fashion, however, and the band’s lyrical content never takes precedence over the musical. Life… is a Fraction is many things and one of this a cavalcade of sound. It isn’t a load of sound and fury ultimately signifying nothing as Aroian and his collaborators weave a handful of textures, without fail, into a startling synthesis of modern rock spliced with electronic music.

The presence of sequencers and synthesizers during Life… is a Fraction has an enormous impact on the work’s sound. “Restless” opens the album with a thundering salvo of power trio rock, ala Rush, but the presence of electronic instrumentation helps fill out the sound in ways simple guitar overdubs could not. “In Search of the Unknown” is, in some ways, the true album opener, however, as the opening duo constitute a bit of important exposition before the album’s “story” sets off in earnest with the third cut.

The progressive inclinations of the material are impossible to ignore. “In Search of the Unknown”, however, shares with other Elsewhere songs the same unerring instinct for finding “new” arrangements – riffs and emerging melodies with a clear frame of reference that still avoid outright aping the work of others. The album’s fifth track “Diagnosis” carries this idea to its limits. A dramatic synthesized opening transitions into inevitable guitar muscle but it stays light on its feet throughout, never ponderous, and always alight with a slight electronic charge in virtually every song.

“Realization”, however, dispenses with any prior niceties and buzzsaws listeners instead with Aroian’s guitar.  He throws brief dive-bombing lead guitar breaks into the mix, as well, and it helps give listeners a stronger claustrophobic atmosphere befitting its title. It’s an inescapable song. “Reflection” achieves a graceful and dream-like waft from the outset and the thumping heart in the center of the song, the bass, tethers the song to earth.

The closing track “Finale: The End of Everything” is a summation, naturally, distinguished by exceptional drumming. It features a solid guitar workout, as well, and some of the big-screen vocals that have played such a key role. Life… is a Fraction aims high, without a doubt, but the attempt sometimes sounds a little self-conscious and obvious. They are looking for the big statement somehow illuminating our common human condition, but it never quite comes together with the impact they crave.

The singles included at the album’s close are unrelated to the aforementioned concept. Handling the release like this is clumsy; lumped in with the Life… is a Fraction set makes it impossible to judge “Call You Out” and “The Pledge” on their merits. The former spits with a lot of rock attitude and has some attention-grabbing tempo shifts. “The Pledge” mixes acoustic guitar with their predictable crunch and it’s interesting to hear them attack a traditional rock ballad with such confidence. It doesn’t torpedo the album as a whole and some listeners won’t be bothered by it. Elsewhere’s Life… is a Fraction has a lot to offer modern rock fans, without a doubt, and never settles for half-measures.