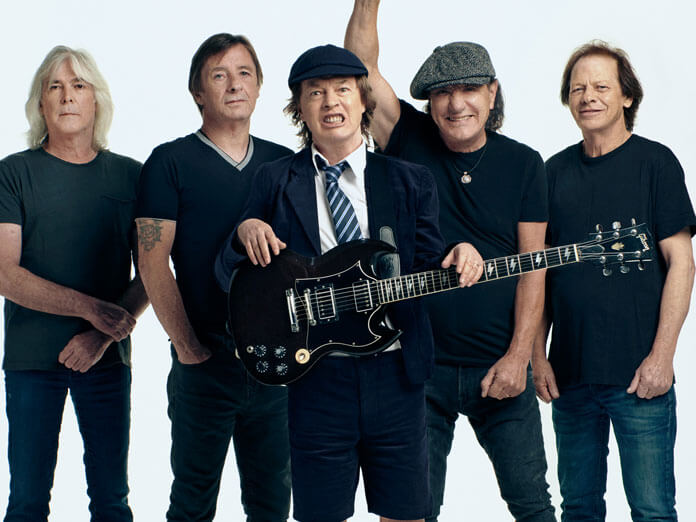 It is a line AC/DC are obviously pleased with: they’ve wheeled it out more than once. The gag runs that, during some or other promotional campaign, some upstart critic accused them of having made the same album 11 times. AC/DC retort to the effect that this is an outrageous, ignorant and insupportable calumny: they have, in fact, made the same album 12 times. The numbers vary with the telling, but AC/DC’s repeated deployment of this quip is itself almost a meta-commentary on the joke they’re telling against themselves. It’s also an assertion of the – correct – belief that they got everything absolutely and unimprovably right the first time, back on 1975’s High Voltage, and have therefore perceived no subsequent reason to tinker with the formula.

Power Up does kind of, inevitably, amount to AC/DC having now made the same album 17 times, but its very appearance is some measure more remarkable than that of any of its predecessors. It would have been little surprise to anyone had AC/DC – or what remained of AC/DC – hung it up at the end of 2016’s Rock Or Bust Tour, itself a miracle of defiance. Guitarist Malcolm Young, plausibly the greatest pure rhythm player of all time, the malevolent metronome who underpinned AC/DC’s fundamentalist rock’n’roll, was dying in hospital in Sydney. Long-serving drummer Phil Rudd was serving home detention in New Zealand after being convicted of charges including drug possession and making threats to kill. Towards the end of the tour, singer Brian Johnson was forced out by encroaching deafness; AC/DC’s decision to swap in Guns N’ Roses’ Axl Rose prompted an uncharacteristically public outbreak of internecine sniping.

Malcolm Young died in November 2017 – just a few weeks after the death of his and Angus Young’s brother George Young, the Easybeats and Flash & The Pan founder who’d also co-produced AC/DC’s first few albums. Those losses – and the attendant funerals – seem to have been a significant catalyst in bringing the band back together. The AC/DC of Power Up are Brian Johnson, whose hearing has been sufficiently restored by experimental technology, Angus Young, Phil Rudd, Stevie Young – Malcolm and Angus’s nephew, who first picked up rhythm guitar when Malcolm became too ill to play in 2014 – and Cliff Williams, who did announce his retirement post-Rock Or Bust, but has had a change of heart.

This is all entirely in keeping with AC/DC’s ruggedly utilitarian ‘man down, drive on’ ethos. Famously, they were not knocked noticeably off their stride by the death of a lead singer: just five months elapsed between the passing of Bon Scott in 1980 and the release of Back In Black, not merely the biggest-selling album by AC/DC, but by some estimations the biggest-selling album by anybody other than Michael Jackson. While one obviously wishes Angus Young nothing but a long and healthy life, it would be strangely reassuring to believe that there’s an up-and-coming Young cousin spending spare hours learning to duck-walk in a school uniform while tearing furious solos from the sweat-slathered neck of a Gibson SG as a battery of cannons erupts on the downbeat and a vast womanly dirigible writhes atop an immense blazing locomotive.

Angus Young has spoken of Power Up being a tribute to his late brother in much the way that Back In Black was a memorial to Bon Scott (not that Back In Black was overladen with sombre reflections on mortality, unless there was elegiac subtext buried deep in “Given The Dog A Bone” and “Let Me Put My Love Into You”). On Power Up, they get perhaps as morose as AC/DC are ever likely to on “Through The Mists Of Time”, but this is nevertheless a pounding metal anthem with a soaring chorus, screeching solos and drums that pound like a diplodocus’s heartbeat.

The songs on Power Up are substantially posthumously credited to Malcolm Young, wrung from riffs he’d conjured around the writing of 2008’s Black Ice. There being no imaginable mileage in comparing any of Power Up to anything but previous AC/DC albums, it’s a solid second-tier AC/DC record: it’s no Highway To Hell or Dirty Deeds Done Dirt Cheap, but it wouldn’t be at all embarrassed by the company of, say, Ballbreaker or The Razor’s Edge. And the best individual songs are well worthy of the AC/DC marque: “Realize”, impossible to hear without imagining Angus Young in ecstatic soak atop a speaker stack; “Demon Fire”, a monumental boogie recognisable as a descendant of “Whole Lotta Rosie”; “Wild Reputation”, a swaggering retread of “Rock And Roll Ain’t Noise Pollution”; “Shot In The Dark”, a rolling rocker illuminated by one of those Angus Young solos that emphasises the sheer mellifluous prettiness of his playing as well as its pyrotechnic flashiness.

It is perhaps regrettable that it now looks like there will not be an Axl Rose-fronted AC/DC album – those shows were fantastic, Rose endowing AC/DC’s familiar cheerful live pantomime with genuine feral menace – but it may be that AC/DC reflected, reasonably, that they don’t have that kind of time. At any rate, Power Up deserves acclaim for more than merely existing, and it deserves plenty for that. If AC/DC’s – and the world’s – circumstances permit a tour, Rosie’s re-inflation will be abundantly justified.