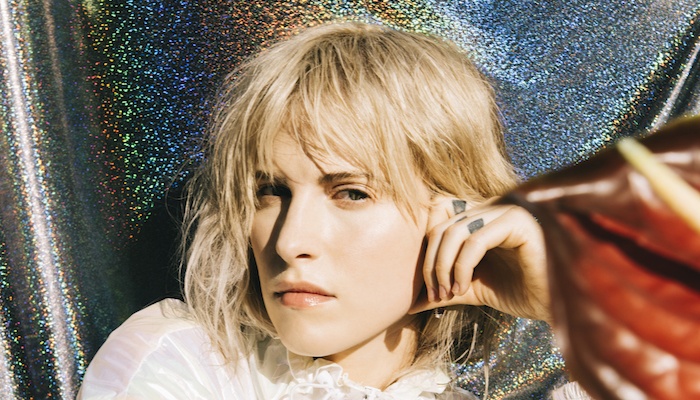 It looks like Hayley Williams may have a big announcement on the way.

This week, Williams began teasing something with a few cryptic clues fans think have to do with more new solo music.

Last year, Hayley Williams ventured outside of her Paramore comfort zone to release her debut solo album Petals For Armor. Although the LP marks Williams’ first-ever full-on solo project, the LP was still a family affair for Paramore. Taylor York produced Petals For Armor while Zac Farro helped with the creative visuals including the “Dead Horse” video. As well, Joey Howard, Paramore’s touring musician, helped write and record various songs on the album.

Now, it looks like there may be even more solo music on the way from Williams. This week, fans began noticing a few cryptic clues that they believe are about Williams’ solo project. To start, hayleywilliams.com officially redirects to FlowersForVases.com.

The website’s homepage includes a black and white animation of a cross, flowers and candles. As well, there’s brief audio of Williams singing “my limb” over and over again.

Along with all of this, a Flowers For Vases Instagram has launched. Although it is not verified, it appears to be teasing even more clues. On Friday, the account shared a cryptic message on its Instagram Story. One clever fan was able to translate it and the secret message reportedly says “FRUITANDVIGOR.”

On top of all of this, Williams is even mailing some interesting items out to fans. Twitter user @roxymoure received a package from Williams that had a doll arm with the phrase “plant me” printed on a tag. The item, which was wrapped in white fabric, was even signed by Williams.

did anyone else get this mysterious package from @yelyahwilliams?? pic.twitter.com/mRcm1a2ZyB

Soon after, another fan received the same package only instead of a doll arm, they were gifted a doll leg. These surprise packages from Williams correspond back to the audio of her saying “my limb.”

Another Twitter user made an interesting connection to the arrival of these Flowers For Vases clues. “Simmer,” the lead single for Petals For Armor, officially arrived on Jan. 22, 2020. Coincidentally, these cryptic clues began popping up on Jan. 22, 2021.

A lot of the imagery for these Flowers For Vases clues do relate to the Petals For Armor era. The flowers in the projects’ names is an obvious similarity. As well, Williams used the roots imagery, which relates to her “plant me” tags, throughout Petals For Armor on songs such as “Watch Me While I Bloom” and “Roses/Lotus/Violet/Iris.”

Ultimately, many fans are theorizing that Flowers For Vases could be the title of a new solo album from Williams. Given the similarities between the hints shared and Petals For Armor, some think it could be a direct follow up to her debut.

what if flowers for vases or whatever is somehow opposite of pfa?? like if this is the album aesthetic, it’s like the complete opposite of pfa. i wonder if that means it’s different sonically or thematically.

Mkay, so Flowers for Vases is a follow-up to Petals for Armor? Here we’ve got some grave/memorial imagery, religious symbols (cross and 3 candles with little halos), a box with a lock on it… I don’t have a thesis yet, I’m still in analysis mode. College degree boutta jump out pic.twitter.com/aiUSHJXH1g

Hayley Williams has been posting cryptic shit for a while. Now she’s sending doll arms in the mail?!? Ok, girl. @yelyahwilliams #flowersforvases pic.twitter.com/3RFDe7ZCOG

SHES SAYING ‘MY LIMB’… SHE SENT A DOLL’S LIMB TO ROXY… FLOWERS FOR VASES = PETALS FOR ARMOR SEQUEL pic.twitter.com/wNECxSBtH7

Read more: Yes, Bernie Sanders has seen that meme, and now he’s using it for charity

The arrival of these clues is interesting seeing as Paramore have been teasing new music for the past few months. Speculation about a new Paramore album has been swirling since last fall. Back in October, some slight changes to the band’s social media platforms led to fans theorizing new music could be on the way. Then, following a comment from Jimmy Fallon, Paramore shared a cryptic message seemingly confirming they are working on new music.

It’s possible that these Flowers For Vases clues could be hinting at a new Paramore album. However, seeing as hayleywilliams.com redirects to flowersforvases.com, most believe these clues are about Williams’ solo music.

What are your reactions to these cryptic clues? Do you think Hayley Williams is teasing more solo music or a new Paramore album? Let us know in the comments below.