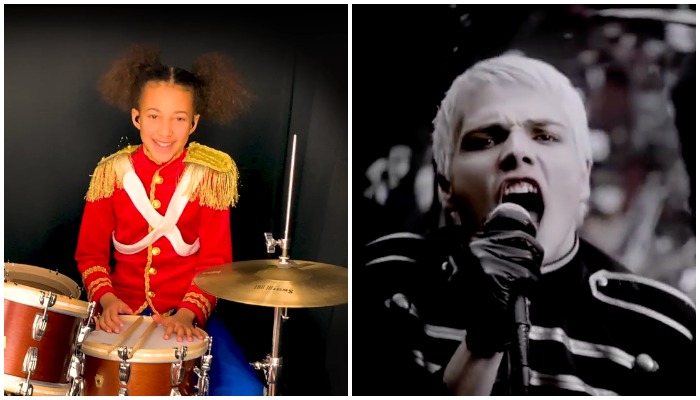 Musical prodigy Nandi Bushell is back at it with another impressive drum cover this week.

This time around, she decided to cover a My Chemical Romance classic she only just discovered this month.

Read more: It looks like a ‘Harry Potter’ TV series may be in the works at HBO Max

By now, a lot of you are familiar with Nandi Bushell, the 10-year-old musical prodigy from England. Over the years, she has shared numerous rock covers of Disturbed, blink-182, Rage Against The Machine, Green Day and System Of A Down among others.

Since she started posting her covers online, Bushell has caught the attention of many familiar faces. Back in April 2020, Josh Dun gave Bushell a nod after she covered twenty one pilots‘ “Heathens.”

As well, Tom Morello backed Bushell after she covered Rage Against The Machine for the Black Lives Matter movement. Shortly after this, Morello gifted Bushell one of his custom Fender guitars.

Now, Bushell is back with yet another stellar drum cover. This time around, she decided to take on My Chemical Romance’s hit “Welcome To The Black Parade,” a song she just recently discovered. According to her dad, Bushell is starting to go through her emo phase.

“I love being able to let out all my energy after a stressful week of home learning and online exams. My daddy said I am starting to go through an #emo phase as I discovered My Chemical Romance this week! So so so good! I absolutely love #WelcomeToTheBLACKParade such a great song to let it all out to.”

As it turns out, Bushell isn’t the only person to be recently inspired by “Welcome To The Black Parade.” Earlier this month, we finally learned just how Kevin Smith is incorporating the song that inspired Clerks 3 into the upcoming film’s script.

As well, in other My Chemical Romance news, fans are speculating that Gerard Way may finally make a cameo in season 3 of The Umbrella Academy. Last week, we learned that the cast and crew are getting ready to start filming the highly-anticipated new season of the Netflix show.

What are your reactions to Nandi Bushell’s My Chemical Romance cover? What song would you like to see Bushell cover next? Let us know in the comments below.