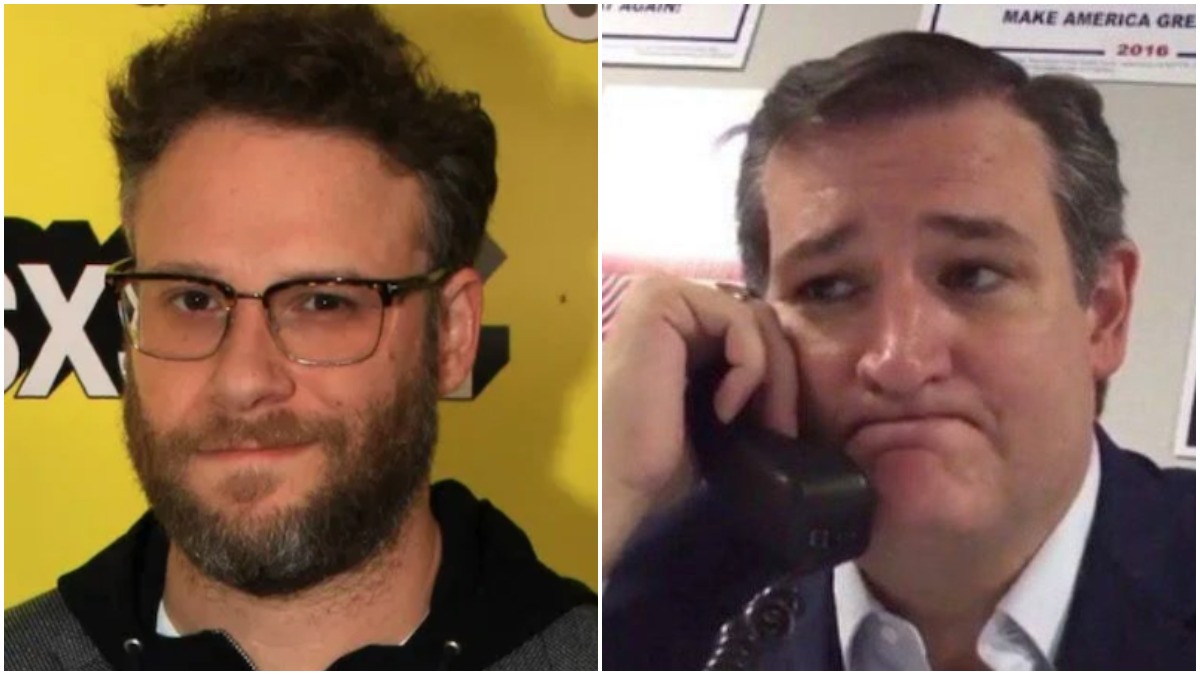 Throughout quarantine, many of us have picked up new hobbies like baking bread, sewing quilts, playing board games, or exercising. Seth Rogen also has a new pastime: calling Ted Cruz a fascist and telling him to “fuck off”.

As Uproxx points out, the 38-year-old actor has made it his mission to tweet insults at the 50-year-old Texas senator/pathetic MAGA loyalist for being, well, a conniving piece of shit. On January 20th, the uniquely unlikable Cruz decided to engage with Rogen when the vocal anti-Trumper responded to Cruz’s dimwitted criticism of Biden rejoining the Paris Climate Agreement with a terse, “Fuck off you fascist”.

Cruz replied by quote-tweeting Rogen with some insufferable bullshit about him being a rich Hollywood celebrity, and Rogen again responded concisely: “Haha get fucked fascist. Go encourage a white supremacist insurrection again you fucking clown.”

That was on Thursday, and since then Rogen and Cruz have continued to go back and forth with one another while Twitter munches popcorn. Cruz is a villainous blob who’s made it his political goal to unleash as much cruelty and inhumanity on the American populace as possible, but in the world of Twitter he’s just a painfully unfunny Republican dingus.

For instance, on Friday, Cruz shared that Fantasia was the first film he saw in theaters and Rogen replied by saying that, “Everyone who made that film would hate you.” The next day, Cruz quote-tweeted Rogen’s response and said the he behaves online “like a Marxist with Tourette’s” and then tried to trigger him by saying that he actually enjoys his movies.

That struck a nerve with Rogen, but not for the reason Cruz intended. “As someone who has Tourette’s in their family (and also has a very mild case himself), I once again take great pleasure in telling you to go fuck yourself,” Rogen said. “(Also VERY few cases of Tourette’s manifest in uncontrollable swearing. Most cases, like mine, manifest in twitching.)”

“Also you’re a fucking fascist. Shut up and go away,” Rogen added for good measure.

Most people would just take the K.O. and leave at that point, but Cruz has decided to waste his state’s tax dollars by continuing to argue with the Sausage Party actor instead of doing anything useful with his power. After Rogen called him a moron, Cruz mirrored the insult like a child and then wrote some eye-rolling horseshit about Hollywood liberals, cancel culture, and the fascist left. Real original stuff.

However, Rogen hasn’t let the spat devolve into a context-free pissing match. “This isn’t a Twitter ‘feud,’” he said this morning. “Ted Cruz tried to overthrow our government. He inspired a deadly mob to storm the Capitol. And I think that deserves ridicule. So fuck him.” Then, he quote-tweeted Cruz’s last reply and said, “Your lies got people killed. You have blood on your hands,” once again referencing Cruz’s support of the Trump-fueled insurrection at the Capitol that left five dead.

Cruz has yet to respond to Rogen’s latest right-hook, but considering how far this shit has already gone, it’s unlikely that he’ll bow out now. Stay tuned to both of their Twitter profiles to see what happens next.

Fuck off you fascist.

Hey @tedcruz. Watch this and then go fuuuuuuuck yourself you clown. (This is way more fun now that I know he’s for sure seeing my tweets) https://t.co/9hsLehI5Bp

As someone who has Tourette’s in their family (and also has a very mild case himself), I once again take great pleasure in telling you to go fuck yourself. (Also VERY few cases of Tourette’s manifest in uncontrollable swearing. Most cases, like mine, manifest in twitching.) https://t.co/NJaEjMfNJt

All jokes aside, @tedcruz is a fascist piece of shit.

This isn’t a Twitter “feud.” @tedcruz tried to overthrow our government. He inspired a deadly mob to storm the Capitol. And I think that deserves ridicule. So fuck him.

Your lies got people killed. You have blood on your hands. https://t.co/eoy1uUDK73