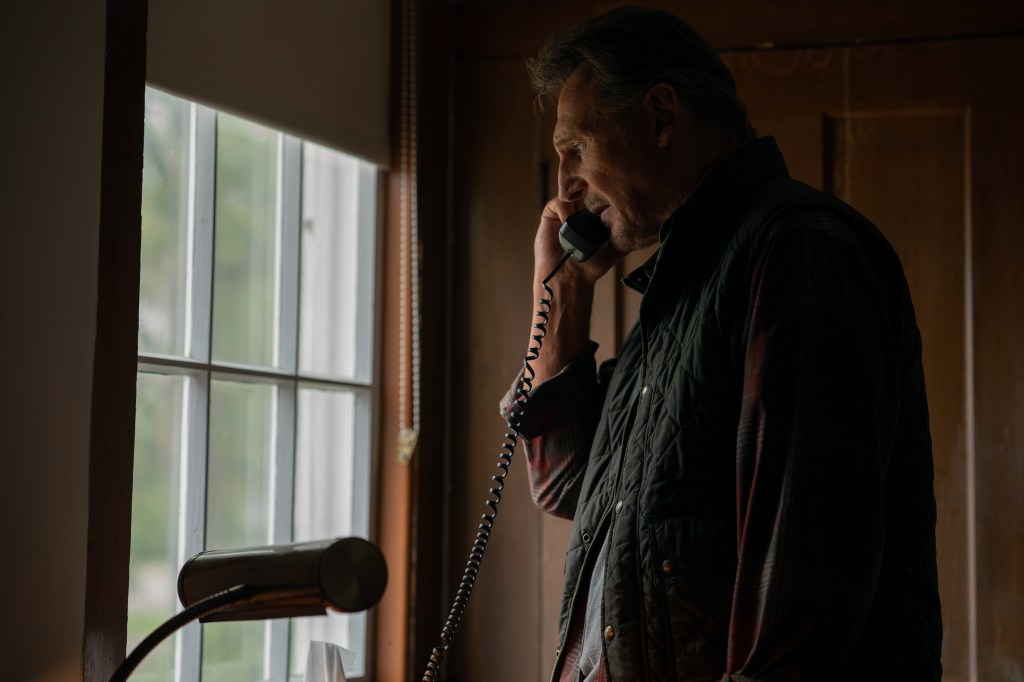 Refresh for updates and top 10 chart: It didn’t take long for history to repeat itself.

We’re not just talking about the second 2nd weekend No. 1 hold for a Liam Neeson Open Road release during the pandemic, i.e. The Marksman which earned $2.03M, -35% for a running total of $6.09M. But how the major studios ran for the hills again, just like they did after the release of Tenet, pushing their Q1 titles seeing the bluesy Christmas results of Wonder Woman 1984 and News of the World.

Yes, as we told you, this was to be expected in Q1 given how the virus is lingering despite the deployment of the current vaccine. There’s an interesting article in this morning’s New York Times about how many more infections were bound to get, even with the vaccine, should the country decide to relax restrictions. Already with the vaccine, scientists at Columbia University estimate that we’re bound to get 158M total infections if the current restrictions we have in the U.S. stay in place until late July. This could mean we go through another cycle of release date changes, and push theatrical further into the fall. We’ll see.

Right now 56.5% of the U.S./Canada 5,9K theaters are open with Illinois, including Chicago, expected to re-open next weekend in time for the Warner Bros/HBO Max release of The Little Things with 40%-50% auditorium capacity.

After Universal, Sony, Disney, MGM made major changes for Q1, with the latter’s highly coveted theatrical Bond film No Time to Die heading to the second weekend of October, the hopeful eye on the prize to bring theatrical back is Disney/Marvel’s Black Widow on May 7. But will Disney give into a theatrical/premium Disney+ release for the MCU movie or move it to Disney+, given how devoted they are to the streaming platform in the wake of The Mandalorian and WandaVision‘s release? Or can they be patient and foster the feature’s potential $1 billion global gross? And will we be OK by then? Unfortunately, not according to this NY Times article. Now, Warner Bros. aren’t looking like crazy people with their 2021 HBO Max-theatrical release strategy (at least for the near future of the pandemic; let’s see what happens when the world opens). WarnerMedia did consult with epidemiologists and a number of experts before making their big swing with the 2021 day-and-date theatrical HBO Max release. Those consultants kept telling the studio it would take a while for vaccines to take effect and further delays would be imminent.

Note it’s not like the other major studios have lost faith in theatrical in the long run: They’ve delayed releases, and they want exhibition reopened again. They want the revenue stream back. But this whole short term plan of selling off fare, or sending it to PVOD may continue for a few more months.

As the smoke clears from last week’s moves (which occurred after Joe Biden was sworn in President), we’ve outlined further down how the first half of the year looks for the theatrical calendar. Universal and Warners will deliver the bulk of the product, with many weekends open in between titles.

Neeson’s previous pandemic theatrical release from Open Road, Honest Thief, was a bit ahead of Marksman in weekend 2 earning $2.3M with a $7.4M running total. But that’s because the movie had access to more screens at the time, 2,502, versus the 2,018 bookings that Marksman has here. Top markets were Dallas-Ft. Worth, Phoenix, Salt Lake City, and Houston. The pic’s top gross in the country came from the Cinemark Pharr Town Center in Pharr, TX near the Mexican border.

In the meantime, Universal’s Croods: A New Age remains in theaters in 1,876 theaters, +21, in weekend no. 9 since its Thanksgiving release making $1.82M, -9%, while also being available on PVOD for a running total of $41.8M. Again, a bittersweet result as we told you last week: You’d never see these types of weekend numbers and holds for a DreamWorks Animated title of late in weekend no. 9 (How to Train Your Dragon the Hidden World grossed $817K in weekend 9 at 822 sites), however, at the same these movies aren’t making the major money that they typically do in a normal marketplace (Hidden World posted a first weekend of $55M domestic — far more than the entire run here of Croods 2).

We’re still waiting on numbers from Warner Bros for Wonder Woman 1984‘s fifth weekend, but it’s expected to make between $1.6M-$1.7M, for a running total around $37M. Today is the last day the movie will be on HBO Max for a while with exhibition getting an additional 31 day exclusive run of the picture before it goes into a normal windowing home entertainment ancillary period.

There was a new release, but not a wide one, in the top 10 this past weekend: Gravitas Ventures’ Dakota Johnson-Casey Affleck-Jason Segel drama Our Friend which was a day-and-date theatrical PVOD release making $250K at 543 sites for a $460 average. I hear that close to half of the pic’s bookings were under $100 on Friday. Whether the movie breaks even depends on its PVOD dollars as theatrical isn’t an indicator of the pic’s financial end game.

The Gabriela Cowperthwaite-directed movie made its global premiere at 2019 TIFF and follows a couple, who after receiving life-altering news, find unexpected support from their best friend, who puts his own life on hold and moves into their family home, bringing an impact much greater and more profound than anyone could have imagined.

Exhibition relations firm PaperAirplane was part of the marketing plan here in getting movie theaters to target moviegoers with custom assets and messaging toward the adults 25-54 demographic. There was a network ad spot push on channels such as Bravo, DIY, E!, Lifetime, Paramount Network, CMT, Hulu, Roku and Vizio among others. Talent made appearances on Good Morning America, The Late Late Show with James Corden, Jimmy Kimmel Live!, Tonight Show, The Late Show and Entertainment Tonight.

A look at the 2021 theatrical release calendar through the first weekend of summer:

Raya and the Last Dragon (Disney)