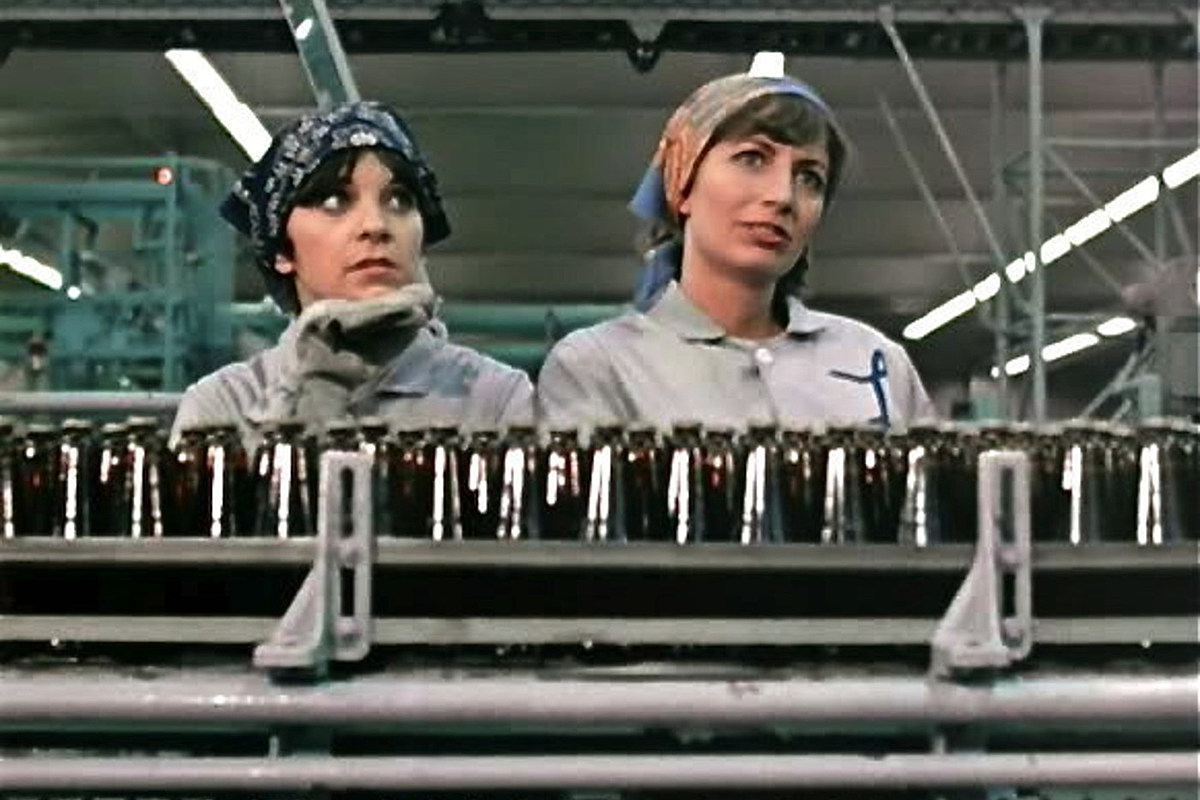 The characters had originally shown up on TV in 1975, appearing for the first time in an episode of Happy Days. Garry Marshall, the hugely successful television producer, based the duo on two women he’d met during his dating days in Brooklyn.

“We took these two girls out and we walked into this diner at three o’clock in the morning. And some girl at one of the booths said something to the girl I was with,” Marshall recalled to the Archives of American Television. Tensions between the women soon escalated. “My date said, ‘Hold my coat,’ and took the girl out of the booth and punched her in the head. And they were killing, four girls, beating each other up.” Though Marshall never saw his date again, the character remained in his brain: “That’s what we should do. We should get two girls like that.”

As brutish girls “from the other side of the tracks,” Laverne DeFazio and Shirley Feeney stood out on Happy Days, thanks largely to the comedic timing of actresses Penny Marshall and Cindy Williams, respectively. They’d be invited back and eventually made five guest appearances on the show. “Everybody immediately saw that as a spin-off,” Garry Marshall, Penny’s older brother, recalled. “I like it because, you see, on TV there’s no blue-collar girls.”

Penny Marshall was immediately on board for the spin-off; Williams, on the other hand, was hesitant. With the actress initially unwilling to sign on, producers auditioned other people for the role of Shirley.

“I read with everybody,” Marshall later recalled, admitting she was never impressed with the other Shirleys. “I just kept saying, ‘I think Cindy’s better than these people.’”

Liberty Williams (no relation to Cindy) would be cast in the role, filming a 10-minute test scene alongside Marshall. “It was okay, but it wasn’t magic,” noted Michael Eisner, who was then the Assistant to the National Programming Director for ABC. That afternoon, Garry Marshall called Cindy Williams and convinced her to shoot the same scene that Liberty Williams had recorded. “We shot it after Happy Days that night with Cindy Williams and it was unbelievable. It was like one of those things that you rarely see onstage or anywhere. The place went crazy.”

It was Eisner’s job to deliver the recorded scenes to network executives who would have the final say on which Williams got the part of Shirley. Eisner was so convinced that the part needed to go to Cindy, he took matters into his own hands.

Watch a Promo for ‘Laverne & Shirley’

While producers were bringing Cindy Williams into the fold, Penny Marshall recruited another staff member. The actress had known Paula Roth since childhood, or, as Roth explains to UCR, “[Penny] basically made my life a living hell. … She would throw my books on the floor at school, she would tell the people not to play with me after school. Needless to say, we didn’t get along.”

Still, that childhood animosity had turned into friendship during adulthood. When Roth visited Marshall in Los Angeles in 1975, she was taken to the Happy Days set. There she witnessed teams of writers and directors bringing television to life. “How do I do what they do?” she inquired. Roth quickly began learning the trade, focusing on spec scripts. When Laverne & Shirley was given the green light, she’d come on board, joining a team of more than a dozen writers working on the project.

Despite being fronted by two leading ladies, there was a serious dearth of women behind the scenes on Laverne & Shirley. As Roth recalls, she was one of only two female writers on the show.

“There was one other writer on the show, also new, her name was Deborah Leschin. And she and I got no respect at the beginning,” the TV veteran admits. “As a matter of fact, everybody thought we were secretaries. And they would say things like, ‘Go get coffee. Do this, do that.’ Until finally we had T-shirts made that said ‘Girl Writer.’”

Physical comedy would become one of the sitcom’s calling cards, something Marshall happily embraced. “I was very brave and fearless. And I was a tomboy,” the actress explained, adding that she spent much of her childhood climbing all over the home. “They’d all report it to my mother: ‘She’s on the fire escape. She’s hanging on the roof.’ I was fearless.”

“Let’s be honest, it was a lot like Lucy and Ethel,” Roth admits, comparing Laverne and Shirley to the classic I Love Lucy characters from the ’50s. “They would do anything. They would hang from chandeliers. Lots of physical comedy.”

While its stars earned much of the attention, Laverne & Shirley was truly an ensemble show. Laverne’s father, Frank DeFazio, was played by Phil Foster, while Eddie Mekka played Laverne’s occasional love interest, Carmine Ragusa (aka the Big Ragoo).

But the two most popular characters outside the leads were Lenny and Squiggy, Laverne and Shirley’s quirky neighbors, played by Michael McKean and David Lander, respectively. Before the show became a reality, the pair created their characters as part of their improv routine. So, McKean and Lander were very protective of Lenny and Squiggy, often butting heads with the show’s writers on their ideas for the characters.

An ongoing gag on the show was Lenny and Squiggy’s entrance, marked by Lander’s distinctive “Hello” greeting. “We decided it would be really important to expand on the hello joke,” notes Roth. “Not just having them come in the door, because that was getting kind of old, and we thought, ‘Wouldn’t it be funny to get them to come into the door wearing absolutely ridiculous costumes and outfits.’”

Watch a Montage of Lenny and Squiggy ‘Hello’ Gags

Another of Laverne & Shirley’s hallmarks would be its opening title sequence, thanks again to an experience from the Marshalls’ childhood.

“Garry wanted something special for the opening credits,” Roth recalls. “What they’re doing – running down the street singing ‘Schlemiel! Schlimazel! Hasenpfeffer Incorporated’ – was what we used to do as kids. We would run down the street, arms holding each other, and sing ‘One, two, three, four, five, six, seven, eight. Schlemiel! Schlimazel! Hasenpfeffer Incorporated.’ And he said to Penny, ‘I think that will work.’”

The series ran for eight seasons, with a total of 178 episodes, at one point becoming the most-watched television show in America. Thanks largely to its continuing legacy and lasting influence, rumors of a reboot have circulated over the years. Before his death in 2016, Garry Marshall confessed it was “very possible that Laverne & Shirley or Happy Days will be back.”

For her part, Roth believes a reboot would be a mistake.