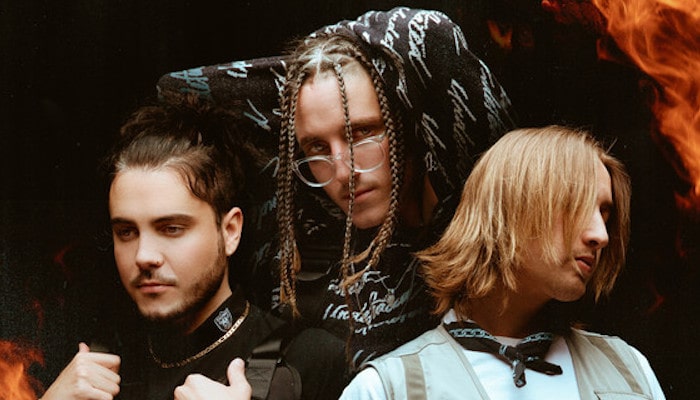 It looks like the wait for Chase Atlantic‘s new album is finally almost over.

This week, the band announced that their new album Beauty In Death is on its way and it’s arriving sooner than you were probably expecting.

It’s going on two years since we last had a new full-length album from Chase Atlantic. Despite this, the Australia-born trio has managed to share a few new tunes with fans since the release of PHASES in 2019. They teamed up with Good Charlotte‘s Billy Martin for a remix of “Too Late.” As well, in 2020, fans were treated to three brand new songs – “Hit My Line,” their collab with PLVTINUM, “OUT THE ROOF” and, more recently “MOLLY.”

Now, the countdown for Chase Atlantic’s third studio album has officially begun. This week, the trio announced that their new album Beauty In Death is finally on the way and fans don’t have to wait too much longer to finally hear it. Beauty In Death officially arrives on Mar. 5 via Fearless Records.

Although the album’s tracklisting has not been revealed, Chase Atlantic did share the official Beauty In Death artwork. The futuristic album cover encompasses a sense of romanticism with its smokey red hues and purple flowers. However, the presence of the devil may be a hint that this new collection of songs has multiple different layers to uncover.

Just after Beauty In Death‘s release, Chase Atlantic have a string of shows scheduled in Brazil. The tour officially kicks off on Mar. 12 in Rio De Janeiro. Tickets are available to purchase here.

While we wait for Beauty In Death to finally arrive, their latest single “MOLLY” is available to stream below.

Are you ready to finally hear Chase Atlantic’s new album? Let us know in the comments below.

HHW Gaming: Everything Announced During The Xbox Developer Direct Presentation
Kayla Rae is giving a voice to everyone who feels like they’re missing love in new single and music video”Blue”
A Ziltoid Comic Series is Coming Next Month, So Get Your Ultimate Cup of Coffee Ready
‘Ant-Man & The Wasp: Quantumania‘ Hits Tracking With $120M Projected U.S. Debut: It’s All About Kang
Taylor Swift – Lavender Haze