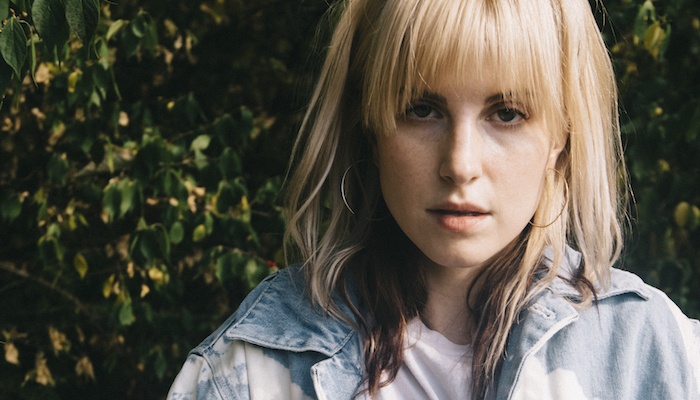 It looks like Hayley Williams has a few more cryptic clues up her sleeve pertaining to the Flowers For Vases project.

On Wednesday, the Paramore vocalist unveiled another clue that has a lot of fans talking.

Rumors are currently swirling that Hayley Williams is gearing up to release a follow-up album to her history-making LP Petals For Armor. Williams first hinted that new music may be on the way in a brief social media video where she says she is making her own folklore.

The comment is seemingly in reference to Taylor Swift‘s new album which was soon followed up by evermore just a few months later. Since it’s been less than a year since Petals For Armor was released, fans believe this comment is a hint that another album is on the way.

Over the past few days, various cryptic clues surrounding a project called Flowers For Vases have emerged. To start, hayleywilliams.com officially redirects to FlowersForVases.com. The website’s homepage includes a black and white animation of a cross, flowers and candles. As well, there’s brief audio of Williams singing “my limb” over and over again.

Read more: BMTH’s next EP is on the way, but it may be a while before we hear it

As well, Multiple fans have received mysterious packages from Williams with various doll parts hidden inside.

did anyone else get this mysterious package from @yelyahwilliams?? pic.twitter.com/mRcm1a2ZyB

These surprise packages from Williams correspond back to the audio of her saying “my limb.” Now, it looks like Williams is further tying this limb imagery together. On Wednesday, she unveiled another dark and cryptic clue about Flowers For Vases. The black and white image relates back to the graphic seen on the Flowers For Vases website.

“dont give me the tourniquet.”

Some fans theorize the post’s caption could be lyrics to an upcoming song. Williams is known for doing this in the past especially before the Petals For Armor era began. For example, she shared a cryptic Instagram with lyrics from “Simmer” before her solo album was officially announced.

Since these Flowers For Vases clues have emerged, various social media accounts pertaining to the project have been created. However, Williams has not said if she is affiliated with any of these accounts. In fact, earlier this week, she confirmed that one of these Instagram accounts has nothing to do with her.

As well, Williams may have hinted about what this project is all about. Earlier this week, she shared a text message on her Instagram story that talks about letting go of past trauma and fear.

“Letting go is not the same as aversion, struggling to get rid of something. We cannot genuinely let go of what we resist. What we resist and fear secretly follows us even as we push it away. To let go of our fear or trauma, we need to acknowledge just how it is. We need to feel it fully and accept that it is so. It is as it is. Letting go begins with letting be.”

This message of letting go relates to Williams’ recent Instagram post. The photo of an arm being sawed off could represent detachment from experiences that occurred in the past.

At this time, Williams has not confirmed what exactly she is teasing. However, collectively, a lot of fans believe that Williams has another solo album on the way. So far, there are quite a few fan theories regarding the Flowers For Vases project floating around.

she now has to face it. i believe that’s what this album is it’s going to be, it’ll be her facing her trauma and her fears. I think we will see a lot sadder or angrier or songs on this album then we would in like petals for armor. This album is going to focus more on the(2/?)

Read more: Iced Earth’s Jon Schaffer is now in the custody of the U.S. Marshals

Here’s a thread of my current theories regarding @yelyahwilliams’s ‘Flowers for Vases’. Lemme know your thoughts.

flowers for vases, i think, is either about mourning or preservation – or a nod to both. like, these “flowers” are a product of new life blooming, but how do you keep them from wilting?

sooo what do we all think flowers for vases is? I was thinking PFA deluxe but she’s already released self serenades as a little bonus album so maybe it’s another album? But I reckon it’ll definitely be released under Hayley Williams rather than Pmore

I’m just gonna say it. I think Flowers for Vases could certainly be a sister album to PFA, but from the vibes of everything I think it’s going farther back in time rather than following up PFA. I mean, we got darker visuals and Hayley quite literally went back to her BNE roots. pic.twitter.com/HVKsvw4gWC

The arrival of these clues is interesting seeing as Paramore have been teasing new music for the past few months. Speculation about a new Paramore album has been swirling since last fall. Back in October, some slight changes to the band’s social media platforms led to fans theorizing new music could be on the way. Then, following a comment from Jimmy Fallon, Paramore shared a cryptic message seemingly confirming they are working on new music.

What are your reactions to these Flowers For Vases clues? Do you think Hayley Williams has another solo album on the way? Let us know in the comments below.