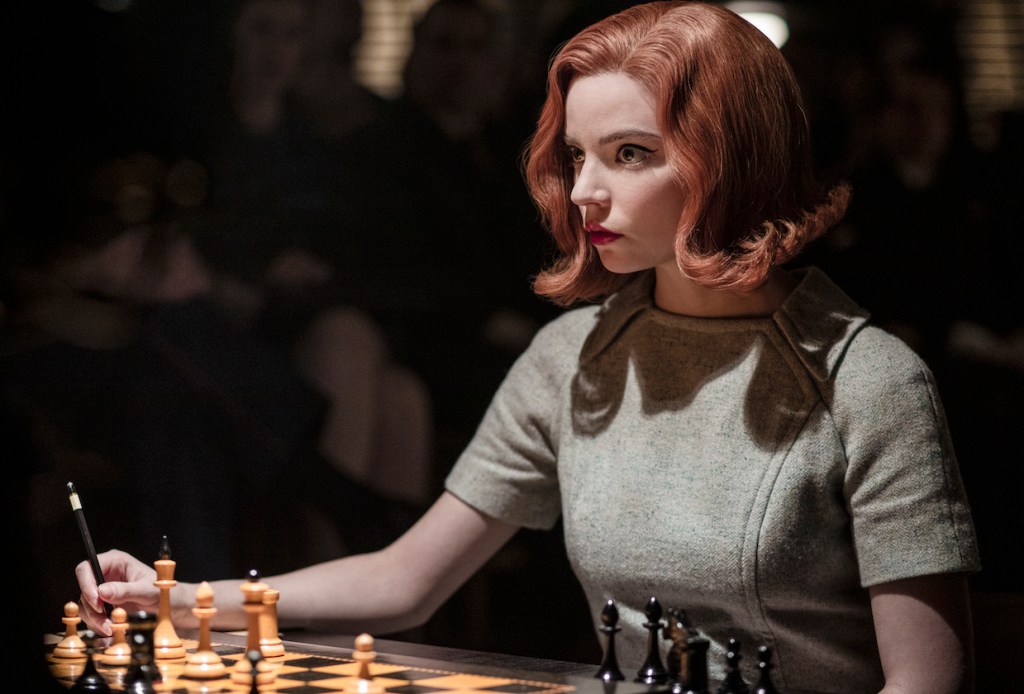 A seven-hour drama series about chess players? It might sound more like a punishment at first than a pleasure. But The Queen’s Gambit — now streaming on Netflix; I’ve seen all seven episodes — does the unthinkable: It manages to make the game of chess fascinating… and sexy, even. (I know!) It’s an underdog story that finds deep emotion and psychological intrigue amid chess’ cold, cerebral moves, and it’s powered by a star-making performance from Anya Taylor-Joy, who’s an absolute knockout. 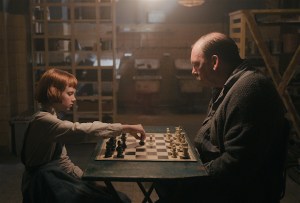 She stars as Beth Harmon, a quiet orphan who discovers a talent for chess while stuck in a grim orphanage where the kids are pumped full of tranquilizers. (She learns the game from a gruff but kind janitor, played by The Night Of‘s Bill Camp.) Soon, Beth is clobbering high school chess club members, even though she’s only 8, and we follow her as she grows up and becomes one of the best chess players in the world in the 1960s, jet-setting to international tournaments and achieving widespread fame. A nagging addiction to drugs and alcohol, though, coupled with a rocky home life threaten to derail her promising career.

Now, of course, just watching people play chess for seven hours could have been painfully tedious, but The Queen’s Gambit seems to know that and spices things up by taking us inside Beth’s head, mapping out her attack with giant chess pieces floating on the ceiling. (Scott Frank, who did Netflix’s 2017 Western Godless, serves as writer and director here.) Beth also hooks up with a ragtag bunch of chess pros along the way, led by the charming Benny Watts (Game of Thrones‘ Thomas Brodie-Sangster), and their nerdy camaraderie makes chess feel less lonely and more like a team sport. Plus, it’s a treat to travel back to the swinging ’60s, with colorful costumes and lush production design that recall Mad Men and The Crown.

Taylor-Joy’s lead performance, though, is the real reason to watch. When Beth is playing chess, she’s cold, unreadable, almost robotic. And she’s got runway-model looks, too: Her huge eyes seem to penetrate whoever’s unlucky enough to sit across the chess board from her, and her flirtation with handsome photographer Townes (Jacob Fortune-Lloyd) provides a fizzy kick. But she also carries a ton of psychological baggage from her childhood, and Taylor-Joy — a Peaky Blinders alum best known for starring in the 2015 film The Witch — gradually unpacks that baggage as Beth gets tantalizingly close to achieving her chess dreams. It’s a messy journey, filled with setbacks and bad choices, but Taylor-Joy finds the beauty in it and shines a light on the raging emotions stirring within this genius.

The Queen’s Gambit does fall into predictable plot points at times — we know, for example, that Beth will have to face off with formidable Russian chess champ Borgov before the end — but it’s satisfying to watch Beth realize her potential as well as face her demons. It even makes you want to dust off the old chess board and play a game or two. Even if you don’t know a bishop from a rook, though, Taylor-Joy’s undeniable performance makes this one a winner.

THE TVLINE BOTTOM LINE: Netflix’s The Queen’s Gambit finds a way to make chess riveting, thanks to a knockout performance from star Anya Taylor-Joy.