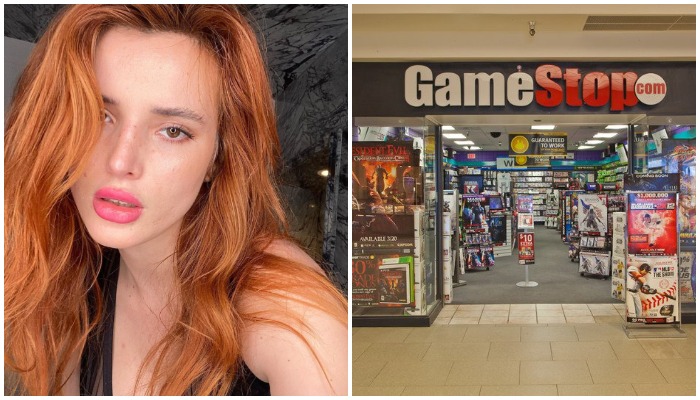 Earlier this week, the Reddit thread r/WallStreetBets encouraged people to pile into GameStop’s stocks in an effort to stun Wall Street firms who were betting those stocks would fall. As a result, financial apps began supporting hedge funds and banning individuals from buying those stocks to keep them from losing more money.

Now, the internet is comparing the ongoing situation to when Bella Thorne joined OnlyFans.

Last year, Bella Thorne decided to join the subscription-based platform OnlyFans. Soon after, she faced backlash from sex workers who claimed her presence on the platform caused policies to change that negatively impacted their ability to make money. For the most part, many argue that because of her fame, she is taking customers and prospective subscribers away from individuals who truly need the money.

Now, this situation is being compared to Reddit’s GameStop stocks ploy. One tweet has gone viral after arguing that financial apps such as Robinhood and hedge funds blocking the purchasing of GameStop’s stocks is similar to Bella Thorne joining OnlyFans.

Read more: Avril Lavigne channels her inner Mark Hoppus while in the studio—watch

“people are thinking i don’t want the redditors to make money no please i want all my e-dudes to prosper.. i meant fuck robinhood/wall street/the gov for not letting people make a little money.”

people are thinking i don’t want the redditors to make money 😭😭 no please i want all my e-dudes to prosper.. i meant fuck robinhood/wall street/the gov for not letting people make a little money

However, some argue that what is happening is actually the exact opposite for a number of reasons.

i just saw someone say the GameStop thing is “the guy version of when bella thorne ruined onlyfans.”

it’s not. not even. i wasn’t happy when that happened, i’m happy about this.

no it’s not cuz bella thorne fucked over so many sexual workers who were just trying to live their lives, robinhood fucked over stupid wall street men 😭 https://t.co/9y3Z57ARYv

The GameStop stock surge has earned a lot of reactions this week. Elon Musk recently explained why he is supporting the Reddit community who started all of this. Meanwhile, others are calling out financial apps such as Robinhood who temporarily suspended buying the GameStop stock, causing it to plummet.

Now, it looks like Google has deleted thousands of negative Robinhood reviews off of the Google Play Store. According to 9to5Google, Robinhood’s app score heavily declined because of all of the bad reviews. As a result, Google removed a reported 100,000 reviews to bring its score back up from one star to four stars.

How it started: How it’s going: pic.twitter.com/QKCMLhPKPK

I just watched Google delete Robinhood’s 1-star reviews to bring it from a 1.0 rating to 4.2 star. pic.twitter.com/Yka9geVXoK

What are your reactions to Bella Thorne’s OnlyFans being compared to Reddit’s GameStop stocks ploy? Let us know in the comments below.