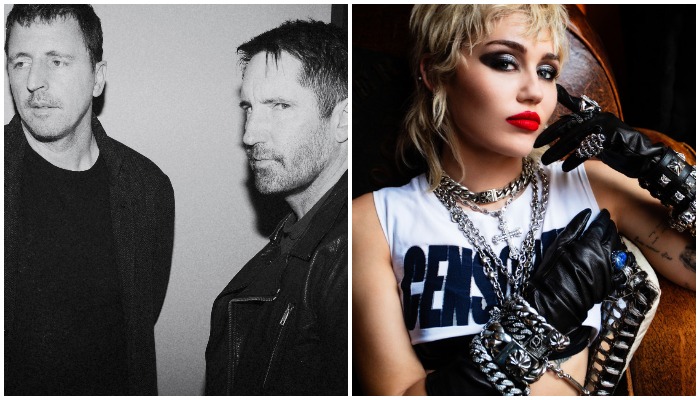 It looks like Miley Cyrus may be gearing up to release a new Nine Inch Nails cover.

This week, she posted a brief clip of her rocking out to the 1998 Nine Inch Nails classic “Head Like A Hole” which giving a nod to her Black Mirror days.

Miley Cyrus has truly shown her love for Nine Inch Nails over the years. Back in 2019, she debuted “On A Roll,” a lighter version of “Head Like A Hole,” while starring as Ashley O on Black Mirror. She also put her personal spin on their track “Right Where It Belongs,” which got a seal of approval from Trent Reznor. “On A Roll” went on to debut at No.19 on Billboard‘s Pop Digital Song Sales chart, giving the Nine Inch Nails classic some newfound love.

Now, it looks like Cyrus may be planning to release a new cover of Nine Inch Nails’ “Head Like A Hole.” On Tuesday, she shared a brief clip of her belting out the song’s lyrics. She also paid subtle tribute to Ashley O with the hashtag #AshleyOGoneWild.

GOD MONEY I’LL DO ANYTHING FOR YOU. 💰👹💵☠️💲🤡 #AshleyOGoneWild pic.twitter.com/LPI2jImD5b

This video has led to speculation that Cyrus may be reprising her Ashley O role for a new Black Mirror season. However, nothing has been confirmed so far.

This isn’t the first rock cover Cyrus has shared over the past few months. Her latest album Plastic Hearts includes her previous covers of Blondie‘s “Heart Of Glass” and the Cranberries‘ “Zombie.” As well, she also covered Hole‘s “Doll Parts” late last year. The emotional cover eventually earned a response from Courtney Love who had a few things to say about it.

“We’ve been working on a Metallica covers album and I’m here working on that,” she told Interview Magazine in October 2020.

Read more: Jon Schaffer is the only Indianan arrested for Capitol riots to vote in 2020

Then, at the beginning of January, we learned that the Andrew Watt-produced covers LP includes some A-list collabs.

“I did a Metallica cover of ‘Nothing Else Matters’ featuring Elton John on piano,” she says. “I’ve got Yo-Yo Ma, Chad Smith [Red Hot Chili Peppers]; so many all-stars. I’m so excited about this collaboration. I’m really stoked. I love when ingredients don’t quite fit.”

Cyrus also teamed up with some rock legends for Plastic Hearts. The rock-inspired album includes collaborations with Stevie Nicks for a special remix, Billy Idol, Dua Lipa and even Joan Jett.

“On A Roll” is available to stream below.

Do you want Miley Cyrus to release a new Nine Inch Nails cover? Let us know in the comments below.